Dr. Karoline Pershell (’03), a Michigan native, wears many hats. Right now, she is both director of strategy and evaluation at Service Robotics & Technologies Inc. and lead data scientist with Zenti Inc., two technology startups located on opposite U.S. coastlines. She has also spent time overseas as a Fulbright Scholar and served with the American Association for the Advancement of Science in Washington, D.C. However, her career in mathematics and her experiences since leaving UT Martin may never have happened if not for a bull.

Pershell started her university experience at Saint Mary’s College – the all-female sister school to Notre Dame – where she played basketball and traveled around the world during a semester abroad. But the decision to join the Notre Dame Rodeo Club is ultimately what started her journey south to Tennessee.

“I grew up riding horses, but I didn’t know anything about rodeo. I joined thinking I would ride saddle broncs. I thought it would be most like breaking out young horses,” she said. However, after arriving at the area’s only practice pen, a group of young men told her that pen only provided practice bulls, not horses. Instead of backing down as expected, Pershell surprised the group by stepping up to the challenge.

“So, never having planned to get on a bull in my life, I was getting on five minutes later,” she said. “I would love to say that I was a natural and from that first ride I knew I would be a bull rider, but the only thing that ride showed was that I had a natural talent for hitting the ground with style. Somewhere between wondering which way was up and if that loud crashing noise came from my body hitting the gate, I remember thinking, ‘This is the coolest thing I have ever done.’

“I pursued bull riding on my own for about another year, competing in a handful of rodeos, including the one here at UT (Martin), and I decided I needed to get some professional help for my bull-riding addiction. … I don’t remember exactly, but I think the conversation with my parents went something like: ‘Mom, Dad, I want to leave my full-ride scholarship at a private women’s university to attend a school you have never heard of in a state you have never visited to pursue something I’m not very good at,’” she said.

So Pershell transferred to UT Martin and made it her goal to convince the rodeo coach she intended to be a serious competitor.

“Coach (John) Luthi had seen it all and heard it all, and he wasn’t so sure he wanted to deal with me and any potential danger I could put myself in. I finally struck a deal with him when I said I would come, work at practice, ride the machine only and, if he decided, I would eventually get on practice stock,” she said. 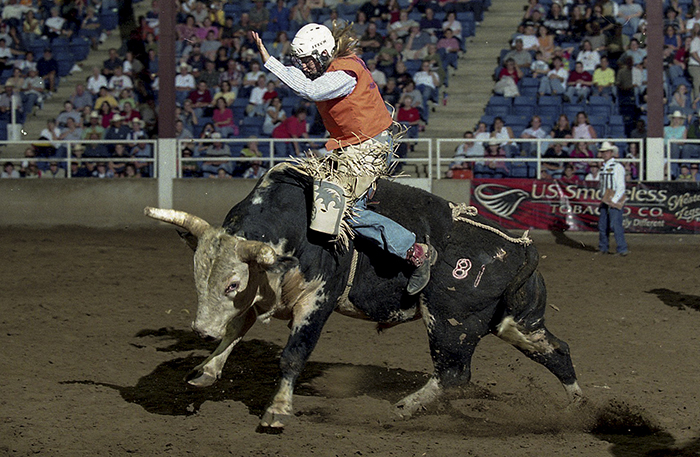 At first, Pershell faced skepticism from her teammates who weren’t sure she knew what she was getting herself into in the ring. She never quit, however, and – like all bull riders – gave her best at every practice despite injuries and exhaustion.

“I worked hard at the practice pen; I worked hard at the gym; I worked hard when no one else was watching. That was the piece for me. I wasn’t doing it to change a system; I was doing it for me,” she said. “When I first started, I had been given a host of excuses as to why women didn’t ride bulls. I had been told that my body wouldn’t be able to be strong enough to withstand the physical abuse that is part of bull riding. Absurd. At that time, I was stronger than a few of the guys, faster than some of the guys and a better student than many of the guys. I know I could learn and improve. … I didn’t want to be the ‘girl bull rider.’ I just wanted to be a bull rider.

“I never understood how my compadres could be consumed with this adrenaline-filled sport, how they could fight their bodies and their minds to give a personal best performance, how they would be willing to make a deal with the devil to draw the rankest bull. I didn’t understand how they could love this, and then look at me and ask why I was doing it too,” she added.

Those experiences in the practice ring helped Pershell succeed in the classroom – particularly in mathematics – in unexpected ways.

“I feel that one of the greatest things that prepared me for math was being part of a process where I understood that you didn’t have to be magically good or naturally talented. You practiced and you got better,” she said. “I think having that mental mindset is so important for grad school, particularly in math. … It really puts the responsibility and the empowerment back onto you, that you can do this if you put in the work.”

Pershell completed a bachelor’s degree with a major in mathematics and a minor in physics at UT Martin and went on to earn both master’s and doctoral degrees in mathematics from Rice University. She then returned to her alma mater as a professor, an experience that further prepared her for her current industry roles.

“Coming (back) to UT Martin directly after my Ph.D. dissertation means that I walked out of a very technical world that was all math all of the time into a very different world where the majority of my students each semester were not math majors,” she said. “I very quickly had to become a better communicator to bring abstract ideas to a variety of learners who spanned the math spectrum.”

Pershell, who has learned the benefit of taking chances as they come, always encouraged her students to make the best use of their summer vacations to gain knowledge and experience in ways that might not be open to them after graduation.

“I would tell my students that the most amazing thing about being a student is the summer,” she said. “Never again are you going to be able to take a job for two or three months and then quit and not look like some sort of irresponsible person. It’s important to take advantage of the summer to get experience and exposure to as many different types of people and career options as possible.” 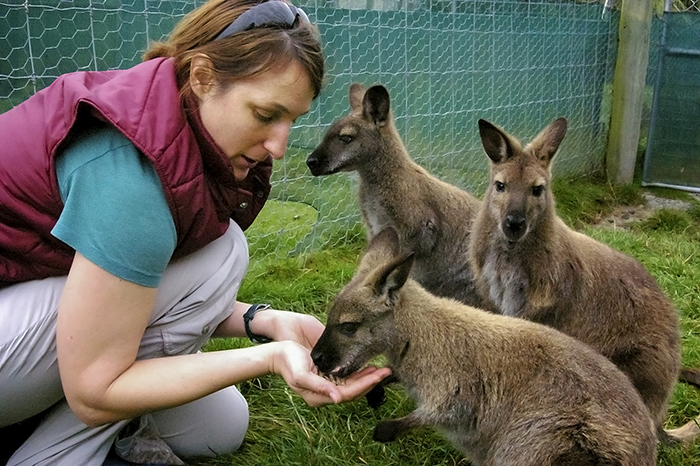 Pershell used UT Martin’s summer breaks herself to work as a principal investigator with the National Science Foundation in 2011 and travel to Qingdao University in China as a visiting mathematics professor in 2012. She also took a semester off when she received a Fulbright Scholars award, which funded her stay at the University of Hyderabad in India as a visiting assistant professor.

Now, her roles with technological startups Service Robotics & Technologies Inc. and Zenti Inc. draw on lessons learned from those opportunities. SRT, based in Washington, D.C., is developing a prototype for a robotics integration platform aimed at smart buildings and innovative custodial services. Zenti, based in Palo Alto, Calif., works with data mining in social media.

“With Zenti, I work with optimization of the back-end algorithm, and I work with our client to help them understand their customer demographic, the specific customer characteristics and then how we would identify those characteristics through language on social media,” she explained. One example of Zenti Inc.’s work can be found in a collaborative project with a Florida State University faculty member that seeks to identify online language patterns indicating suicidal behaviors in an effort to reach out to users before they harm themselves.

Pershell works with many clients who are not familiar with this type of available technology or the process behind it, so her experience teaching mathematics at UT Martin is a valuable tool.

Her willingness to take chances and try new things has produced a list of positions and interests spanning multiple fields and continents, and she urges others to set aside their expectations and simply take advantage of the opportunities in front of them.

“You may be able to find my resume, but what’s way more interesting is my ‘anti-resume’ – the long list of learning experiences that did not result in success. If your anti-resume isn’t at least twice as long as your resume, you’re playing it safe,” she says. “Remember that ‘hasn’t been done yet’ is very different from ‘can’t be done,’ but we often conflate the two.”

Pershell’s non-linear career path shows for certain that whether a student hopes to teach, travel or invent, UT Martin provides a foundation for any future.