Dillon Gibson recalls a fellow student, a woman in her early 70s, who took classes during his first year attending the UT Martin Parsons Center. He remembers that she returned to school “because she wanted to try something new, and she said she loved this center.” Gibson, a 21-year-old K-6 education major living in Parsons, shares this same sentiment with many others as the center celebrates 10 years of changing lives and creating opportunities.

The UT Martin Parsons Center celebrated the milestone with a public reception Jan. 17 as part of the Cruisin’ with Carver introductory tour for Chancellor Keith Carver. The new chancellor, along with Jim Ayers, a co-founder of The Ayers Foundation and major donor and supporter of the center, spoke during a program attended by a crowd of students, community members and elected officials. Faculty and staff who have been with the center since its beginning also received special recognition.

The center was approved in fall 2006 by the University of Tennessee Board of Trustees and Tennessee Higher Education Commission. Classes were first offered in January 2007 at Riverside High School in Decaturville, and ground was broken in February 2008 for a new 19,000-square-foot facility, a joint project between the city of Parsons and Decatur County. An open house and ribbon-cutting ceremony April 22, 2009, officially opened the center.

Progress continued in 2013 when the West Tennessee Healthcare Foundation made a $1 million gift to fund scholarships and help build the center’s 10,000-square-foot West Tennessee Healthcare Foundation Nursing Wing. The Tennessee General Assembly also approved a $1 million grant for the expansion before the conclusion of the 2013 legislative session. The wing officially opened Aug. 28, 2014, and allows the center to offer a full Bachelor of Science in Nursing degree. 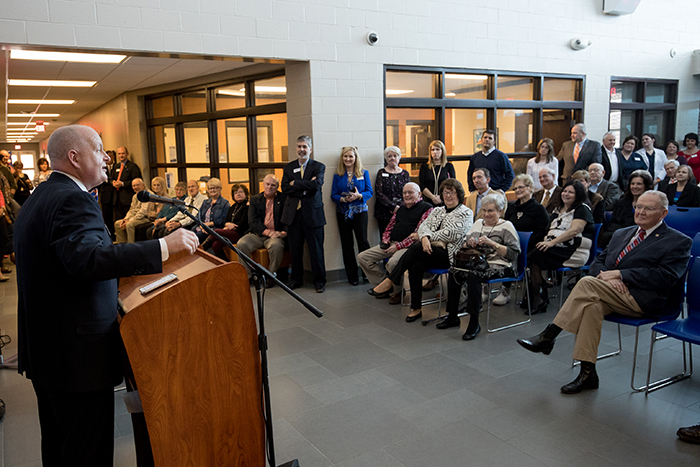 “UT Martin history goes all the way back to about 1900 when it was originally called the Hall-Moody Institute. It has been a big part of West Tennessee ever since then,” Ayers told the crowd, praising the involvement of the local community and its dedication to making the UT Martin Parsons Center a reality 10 years ago. He attended the event with his wife, Janet who is also a major center supporter.

“There are a lot of people in this community (who) dug down in a meaningful way and wrote $50,000, $100,000 checks. You know, we’re a pretty conservative community around here. You’ve got to have something worthwhile to get people to write checks like that. … This community and this county (are) already better off as a result of the economic benefits that our children and our grandchildren have achieved by being able to attend school at home,” he added.

Ayers introduced Carver as “the right man” for the UT Martin chancellor’s position. Carver served as assistant vice chancellor for development at UT Martin when the Parsons location was first considered, and he played a personal role in raising financial and community support for the center. He offered remarks on the center’s growth since that time.

“(The center) was just a great example of what public, private, (and) state partnerships could look like. When you imagined it 10 years ago, and then you fast-forward now with record enrollment … and a parking lot that’s in overflow, that’s a tremendous success,” he said. Carver stressed UT Martin’s goal of student success and regional engagement and called the UT Martin Parsons Center a blend of those ideas.

Carver closed by thanking Dr. Kelli Deere, center director, for her years of service and leadership at the center and in the community. Deere, who emceed the event, noted that the center has had 278 graduates since its beginning and has 340 students enrolled for the spring 2017 semester.

Dillon Gibson’s path to college began when he took a year off following graduation from Scotts Hill High School in Henderson County. Once he decided to attend college, he chose the UT Martin Parsons Center and quickly found a home because of the activities and the classes offered to become a teacher. Except for one class that he will take at the main campus, he will not have to leave the Parsons Center. “So that’s fantastic to know that I can stay right here and get all the education that I need,” he said. Gibson described the center as a “family environment” where teachers reach out directly to students to offer assistance and support. The UT Martin Parsons Center is truly a family affair for Gibson’s family as his mother is also taking classes there.

Jamie Creech, is a senior K-6 education major who first enrolled in college classes at the UT Martin McNairy County Center/Selmer. She now attends the UT Martin Parsons Center, which provided a more convenient location when her family moved to Beech Bluff near Lexington. “I’m married with three children, so this is the perfect place for me, offering the evening classes,” she said. She agrees with others who speak of the “close-knit family feeling” at the center, which appeals to non-traditional students. “I have not passed someone in the hall … and they not make eye contact with you, and smile, and speak to you, because I think that they generally, truly care about our success.”

Elijah Carpenter was raised from a young age by his grandparents. The 20-year-old junior nursing major grew up in Holliday, in Benton County, where he still lives. He graduated from Camden Central High School in 2014 and, because of his grandmother’s illness, decided not to attend a college far from home. He considered other schools in the region, but chose the UT Martin Parsons Center for its location and atmosphere. “It was simply the way the people treated you here, and it’s not as much a school as it is a family, a home, a collective community here,” he said. The center’s location allows Carpenter to add valuable experience to his resume at Baptist Memorial Hospital-Huntingdon where he has worked since May 2016 as a nurse intern.

The intern position and the center’s nursing program are preparing Carpenter for his goal to become a traveling nurse. “I believe our education is top-grade. It can compete with anybody,” he said. “And also our staff and faculty, they mean the world to me, because it’s not a teacher, it’s not an administrator, they’re truly your friends.”

Tammie Patterson, a Parsons native, Ayers Scholar and coordinator of the center’s education program, has taught for the center since its beginning. She says the small-town atmosphere, community support and committed faculty and staff are among the many reasons the center is such an attractive option for students to obtain their degrees. “We are small enough that I still know them (the students). And a lot of these kids, I know their parents, I know their grandparents, I know their brothers and sisters. … That’s really great,” she said.

Besides enthusiastic students and faculty, the center has benefited from stable, strong leadership. UT Martin alum Jason Rushing (‘04) led the center as its first director followed by Dr. Kelli Deere who assumed the post in June 2012. Students and others see her as the perfect person to lead the center. “She’s a leader and an administrator,” said Dillon Gibson. “ She always comes to us first and asks what we want … and then she gives us her vision, and she has such a purpose and such a plan for this school and this center that it’s just unbelievable that somebody has these aspirations.”

Deere can point to any number of “brag points” about the center, but she is especially proud that employers actively seek the center’s graduates who travel from around the region to take advantage of its academic programs. “I always ask how they (the students) heard about UTM Parsons. They tell me (they heard) from other students,” she said in an e-mail interview after the event. “Students are our best recruiting tool. When students have a positive experience, they tell people.”

Parsons Center enrollment grows steadily, and Deere sees two reasons for the success. “The first is that the UTM Parsons Center is a family. Every staff and faculty member wants to see students succeed; however, we hold students to high standards,” she said. “Our faculty goes above and beyond to create a student-centered learning environment. We care about students. Students also care about other students.” These words recently translated into action when the center’s student ambassadors and social work organization joined forces to host a benefit for a fellow student whose house had burned.

“I love my job as the UTM Parsons Center director,” she said. “I find satisfaction in seeing our students graduate, find jobs and come back to the center to thank us for helping them along the way. I feel that my job is to make a difference in the lives of my students.”

Near the conclusion of his remarks, Jim Ayers told the audience about his own vision for the center’s future, which included multi-level parking, high-rise dormitories and a student center. His original vision for a center that serves the educational needs of Decatur County and the surrounding region is alive and well, so no one should doubt what the future might hold.

Congratulations, UT Martin Parsons Center, on your first 10 years. This is only the beginning.