Brig. Gen. Tommy Baker (’95) knows a little something about service to his community, state and nation. He enlisted in the Tennessee National Guard as a high school senior and today serves as assistant adjutant general for the training, supervision and wellbeing of 10,000 soldiers. He returned to his alma mater May 26 as keynote speaker for UT Martin’s 17th annual Memorial Day Commemoration held on the front lawn of the Hall-Moody Administration Building. Baker’s remarks recalled the sacrifices made by America’s military, and he talked after the event about his own life in uniform.

Baker’s ascent to his current position wasn’t part of a larger plan but rather the result of hard work and persistence meeting opportunity. Baker joined the National Guard during his final year at Huntingdon High School and, following graduation, chose to stay at home and work alongside his father in a logging business for almost 15 years. Although his early enlistment provided an income, military service was more a destiny than a way to make a living. His great-grandfather and grandfather were World War I and World War II veterans, respectively, “So, I grew up listening to the stories that they told me about their service, and I was just mesmerized by it,” Baker remembered. “I just thought it was so interesting and inspiring to hear them talk about those days and what they went through. So, I joined the National Guard because I wanted to stay at home but yet serve.”

Baker’s plans didn’t initially include college until he received his commission in 1985 from the Tennessee Military Academy in Smyrna. “There was a requirement for me to finish my four-year degree to maintain my commission,” he said. So, Baker began taking night classes at UT Martin and eventually completed a degree focused on public administration. This was before online education became widely available, so proximity and affordability were the main reasons he chose the university. Several faculty members who taught him had also served in the military, so UT Martin was a good fit for a non-traditional student with a military background.

Baker transitioned into a full-time position in the Guard in 2001 and accepted a post in Nashville, which took him away from Huntingdon for the first time. “The Guard has been such a good experience for me, and I know it has for so many young people across our state because it gives them an opportunity to serve the state and nation, but yet they can still be part of the community,” said Baker. “And, you know, you have a guardsman who’s a platoon leader or a platoon sergeant in your formation, but yet he’s a Sunday School teacher at the local church, or he’s the Boy Scout leader, or he’s the Little League coach. So he’s still touching that community in so many more ways than just his military service. It’s a great honor.”

The Guard is a full-time job for Baker, but he also understands and appreciates the sacrifices made by part-time Guard members – approximately 80 percent of the force. “I don’t know if people understand how hard it is to give all this time on the weekends and through the different times of the year now that we deploy a lot more than we did when I got in,” he said. “It takes a lot, and so to balance that and still be able to maintain a civilian career, … I really respect our men and women that can do that, and they are so talented, so gifted, but yet they decide to give us that time and effort.”

This kind of service fuels Baker’s optimism for the future, especially considering that fewer than one percent of U.S. citizens serve in the military. “That’s kind of a staggering statistic. … It’s that small of a group of our population that’s willing to step forward and do what we need done in defense of the nation,” he said. “But I think what you find in every generation, you have that group of people that’s willing to do it. And it’s just inspiring to see them step forth from all walks of life, from all backgrounds, all educational levels, and say, ‘Hey, you know, I want to put the uniform on, and I’m going to serve.’”

Baker credits his wife, Camille, a Bethel University graduate, for supporting his work schedule and making this career possible. His daughter, Hillary Baker (’08), earned an education degree and teaches first grade in England. His son, Cody, who initially attended UT Martin and later completed his degree at Middle Tennessee State University, is a Blackhawk pilot following his father’s footsteps as a member of the Guard. 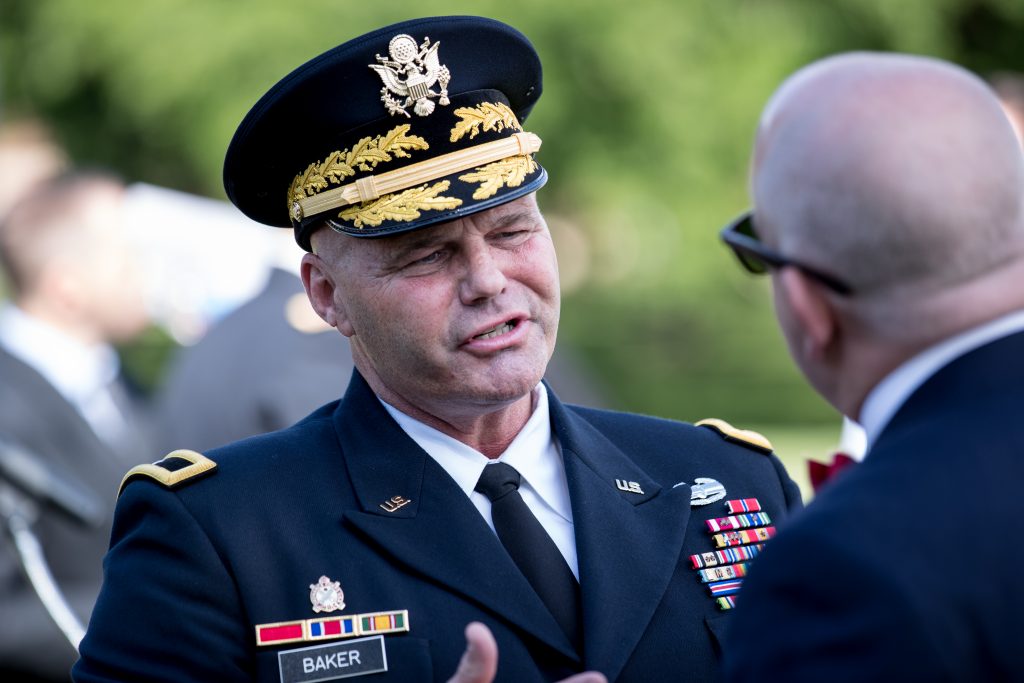 “I would just say to business, entrepreneurs and civic leaders and our spouses in the Guard, without those folks, we cannot succeed. We just have to have their support. There’s no way to get around it, so if you’ve got somebody working for you that’s in the Guard, we appreciate so much you supporting them to where they can do what they need to do,” he said.

Baker has seen a lot in his military career, including two deployments during the Iraq War, so he is ready for wherever the future may lead him. “I just take every day as it comes. … I’ve been so blessed. I’ve had such a great opportunity to serve. You know, enlist as a private and end up where I’m at now, it’s been a real honor,” he said.

As much as Baker is humbled by the success he has earned, he’s even more appreciative for those who have given everything in service to America. “Because of (service members’) sacrifices, and because of who came before them, we are still a free people,” Baker said as he closed his Memorial Day observance remarks. “The debt we owe all of them cannot be expressed in word or deed, but we must simply utter a passionate ‘thank you’ from the depths of our hearts.”