Story and photos by Bud Grimes

Creating things is in Michael Dawson’s DNA. In summer 2017 he developed a wireless ignition system for a local church’s fireworks show. Dawson saw a challenge and enjoyed using both ingenuity and common sense to make shooting fireworks safer. The 2015 UT Martin engineering graduate brings the same attitude daily to Monogram Refrigeration LLC in Selmer, where the company makes high-end refrigerators for home and commercial use. The company tagline – Elevate Everything – also describes this young engineer’s work ethic and how he’s building a successful career.

Dawson was born in Modesto, California, and moved with his family to Henderson at the age of three when his father accepted a transfer option to Proctor & Gamble Co. in Jackson. Dawson attended Chester County High School, graduated in 2010 and entered UT Martin to pursue an engineering degree. “I grew up making things,” he said. “I jumped around between the different concentrations for a while and landed on electrical (engineering), … I really liked the idea of making things do things.”

While at UT Martin, Dawson was a member of the Institute of Electrical and Electronic Engineers and the Society of Manufacturing Engineers, both of which offered opportunities to work on small projects and visit different industries in the region. “I’m huge on projects,” he said. “At school in my free time, I always had something going on, either making a custom speaker, or like a watering system, or I like green energy and stuff like that, too. … Kind of the neatest thing about engineering is, whatever you can think of, you can actually turn a thought into a physical product.”

A point of pride in his college years was having a key role as a member of the 2015 senior engineering design team that competed in the SAE Aero Design East competition in Lakeland, Florida. The team entered the highly competitive advanced class, which requires significant electronics knowhow to be successful. The electronics engineering component of the project required a model airplane to drop a humanitarian package close to a target zone, and Dawson was the only team member with this level of electronics knowledge.

“He (Dawson) designed on his own the entire electronics suite for the airplane and even fabricated his own circuit boards and wrote his own code, and I just remember him being tenacious with it,” said Dr. Doug Sterrett professor of engineering and the project’s pilot. “I mean he was adamant about not buying something off the shelf (permissible in the competition). He wanted to design and fabricate it, which is admirable.” 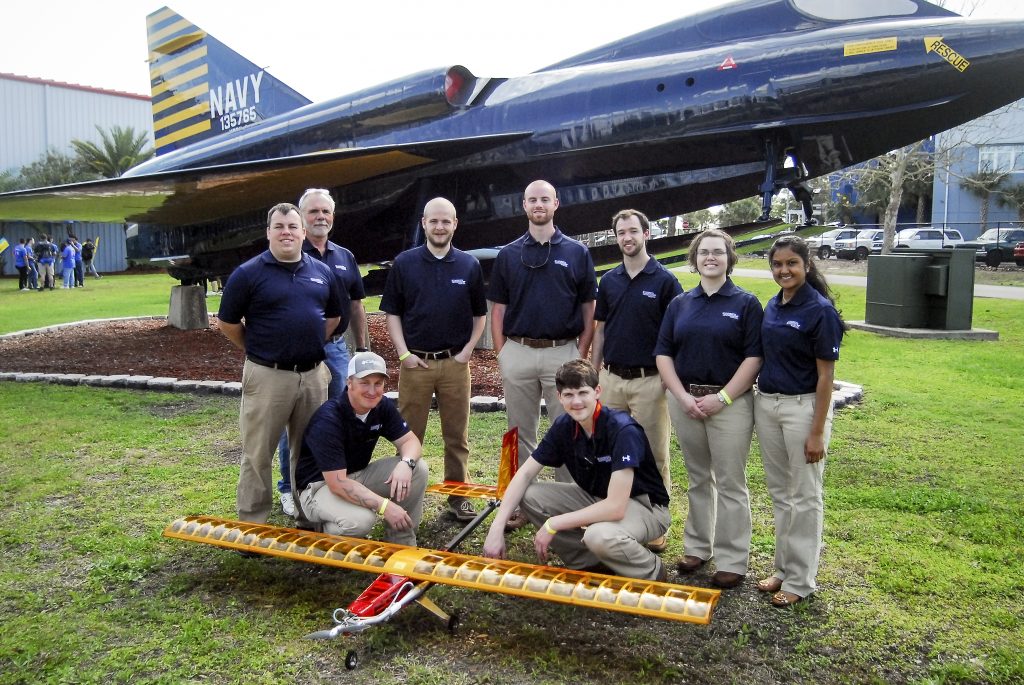 In addition to the excitement of hitting the target zone during the final round of competition, Sterrett still laughs as he remembers Dawson’s mother surprising the unsuspecting pilot (Sterrett) with a celebratory bear hug from behind just as the plane landed. The team placed third overall and third in the “technological report” and “closest to target” categories. This group was the first UT Martin team to compete in this category and the first to earn medals of any kind on behalf of the university. UT Martin was also the highest-ranked American team in this year of competition.

In addition to a proud mother, the airplane-design project resulted in several takeaways for Dawson. “That’s where I actually learned how to do my wireless communication, the hands-on for it, and how to process data,” he said. “So, I mean for me, I learned some very, very important skills from that competition.” Teamwork and dedication also factored into the project’s success. “We (the team) probably spent more time together than we did in school,” he recalled. “Every weekend we were together at school and after hours every single day. Yeah, we spent an incredible amount of time just hanging out and working together.”

Dawson sandwiched the senior design project between two career-shaping cooperative education experiences at Monogram Refrigeration during the summers of 2014 and 2015. Internships and co-ops vary for college students, Dawson said, but Monogram placed him in a significant role as an electrical engineer and gave him a specific challenge. At that time, the company was experiencing unresolved transformer failures in completed refrigerators, and this became Dawson’s primary project.

“I jumped around between the different concentrations for a while and landed on electrical (engineering), … I really liked the idea of making things do things.”

“We ended up designing what’s called an ‘ALT test’– an accelerated life test,” he said. “I built this big fixture that ran these transformers through accelerated failure tests, so it’s high temperature, high humidity and normal loads but at a really, really accelerated rate. We could see why (the transformers were) failing, and it represented what was going on in real life to a T.”  Dawson’s test determined that the transformer fuses were hydroscopic, meaning they absorbed water and deteriorated over time. “So, we rejected all of our inventory of that transformer and got new ones and fixed the problem,” he said. “I was extremely proud of that.”

Even better for the company were the savings made possible as the result of an improved service-call rate that reduced future costs. “That was like a (one-time) $320,000 cost avoidance by changing to the new transformers and rejecting the old ones,” said Dawson. “It was a big savings for the company.” The improved transformers remain in use today, and Dawson’s successful co-op work, along with an engineering opening at the plant, helped open the door to a full-time position with Monogram. He began as a lead-production engineer following his fall 2015 graduation.

Ray Deming, Monogram plant manager and a WestStar Leadership Program graduate, noted the value of real-world experiences for college students in an industrial setting. “The experience of performing work in an actual industrial environment will not only give the student a great perspective on potential future employment but will also help them decide if this is what they truly want to pursue,” Deming wrote in an email. “The co-op experience is important to Monogram Refrigeration because we hope to use their abilities and fresh eyes to work on problem issues for us during their time here. …

“Often in West Tennessee, it is difficult to recruit engineering talent, so the co-op experience is another avenue of talent for us,” he added.

Monogram is owned by GE Appliances, which is now owned by China’s Haier Group Corp. that purchased the unit in 2016. In addition to producing built-in, high-end residential refrigeration, the Selmer facility recently added Zoneline air conditioning units to its manufacturing line. The plant also produces the Monogram Columns refrigerator, now includes 500,000 square feet and is one of McNairy County’s largest employers.

Dawson is gaining responsibility as the company expands – from college co-op positions, to production engineer, to line supervisor for the Columns startup – and in April he returned to a new role in engineering. He is now seal systems specialist, which involves working with new technologies to improve lab capabilities and the quality of seal systems in refrigeration and air conditioning. He also chairs the plant’s change implementation board that approves or denies engineering changes to refrigerator cabinets.

No matter his Monogram role, Dawson appreciates opportunities to create and innovate, such as when he became line supervisor for the Columns model startup project. An existing warehouse was expanded, and manufacturing lines and sheet metal departments were added for the new product line. One of Dawson’s assignments was to develop a new bell system to alert employees about work breaks and return times. Instead of a standard bell system, Dawson added custom audio tracks to alert team members when breaks begin and end. He even included a sound that reminds those on break that work will soon resume.

“It’s more of an encouraging sound to come back from break,” he said of the innovative alert. “I try to really think through the design and make intelligent decisions that way.” He joked and added, “My boss said it’s kind of my millennial side coming through, trying to be nice and encourage people.”

Dawson is optimistic about his future with Monogram and plans to acquire more knowledge and make himself more valuable to the company. Courses and training are offered at the GE headquarters in Louisville, and pursuing an online master’s degree in mechanical engineering is another possibility. He advises students who want an engineering career to seek internships and cooperative education experiences – definite resume highlights as employers consider new graduates for entry-level positions. He added one other piece of advice that has served him well: “Do projects, especially for engineering,” he said. “I feel like all my engineering side projects that I did for my own goals and other people really helped me understand what I was doing in school and practice what I was learning.”

Fireworks explode, bells ring and model airplanes hit their drop-zone targets when Michael Dawson applies his engineering skills to a project. His ingenuity and passion for making things better will keep this engineer’s career out of the deep freeze at one of the world’s premier high-end refrigerator producers.