Kris Keys (’08), a fashion designer from Whitehaven, creates her signature designs – from the flow of the sleeves to the pattern on the fabric – based on the shapes and colors of human blood cells. And not just ordinary blood cells, but those found inside the veins and arteries of a person with hereditary elliptocytosis. This rare blood disorder affects approximately three to five of every 10,000 people and is more common in those with African or Mediterranean ancestries, including Keys herself.

While Keys was studying fashion design at the London College of Fashion in the United Kingdom, she found herself in the hospital with complications from her condition. Surprisingly, this is where she ultimately discovered the inspiration to create her first unique fashion line – “Hematology.” 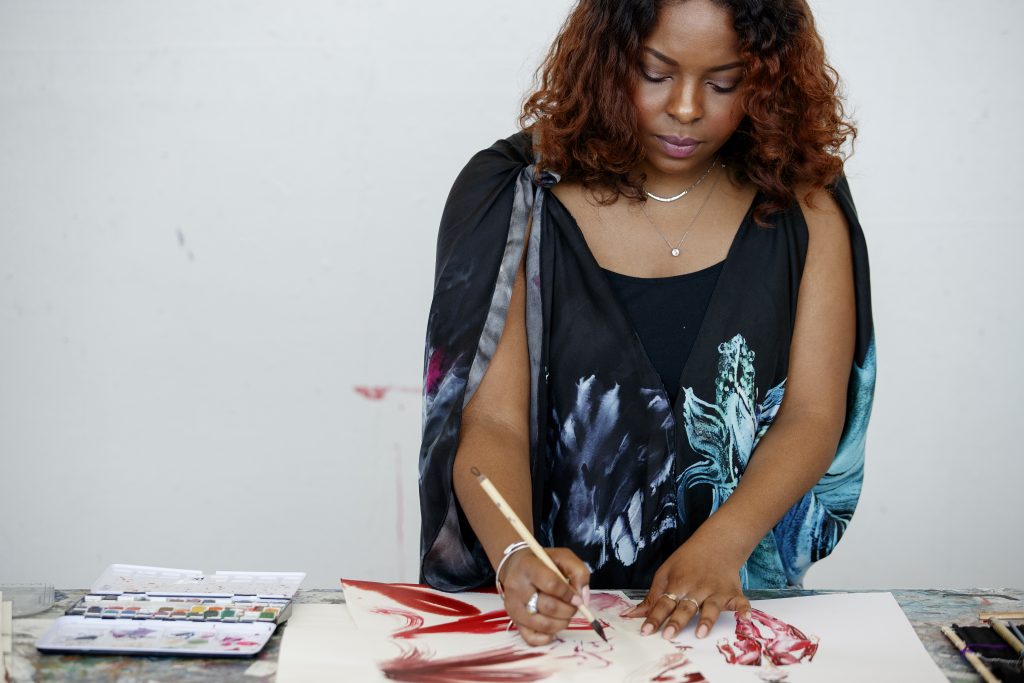 “They kept coming into my room, the doctors, and taking more blood and more blood and more blood. I finally figured they were bringing students into the lab, because you know, they might not come across a person with this blood disorder ever in their career,” she said. “So, I said, ‘I want to see it.’ They brought some photos, and to me they looked like watercolor paintings. Watercolor is the medium I use for painting. …

“All I had in the hospital was my sketchbook, so I started to make these little prints. By the time I left the hospital, I had a little book of all these prints of my blood cells, and I decided that I wanted my first collection to be inspired by that.”

By this point, Keys had spent just over five years in the United Kingdom studying fashion design and illustration from professors who worked with high-fashion houses such as Alexander McQueen and Vivienne Westwood. She had sat beside the runways during London Fashion Week and sketched passing models for fashion magazines and companies. She had observed the British method of fashion design, which comments on topics such as economics, social injustice, health and nature through clothing. Now, it was her turn. 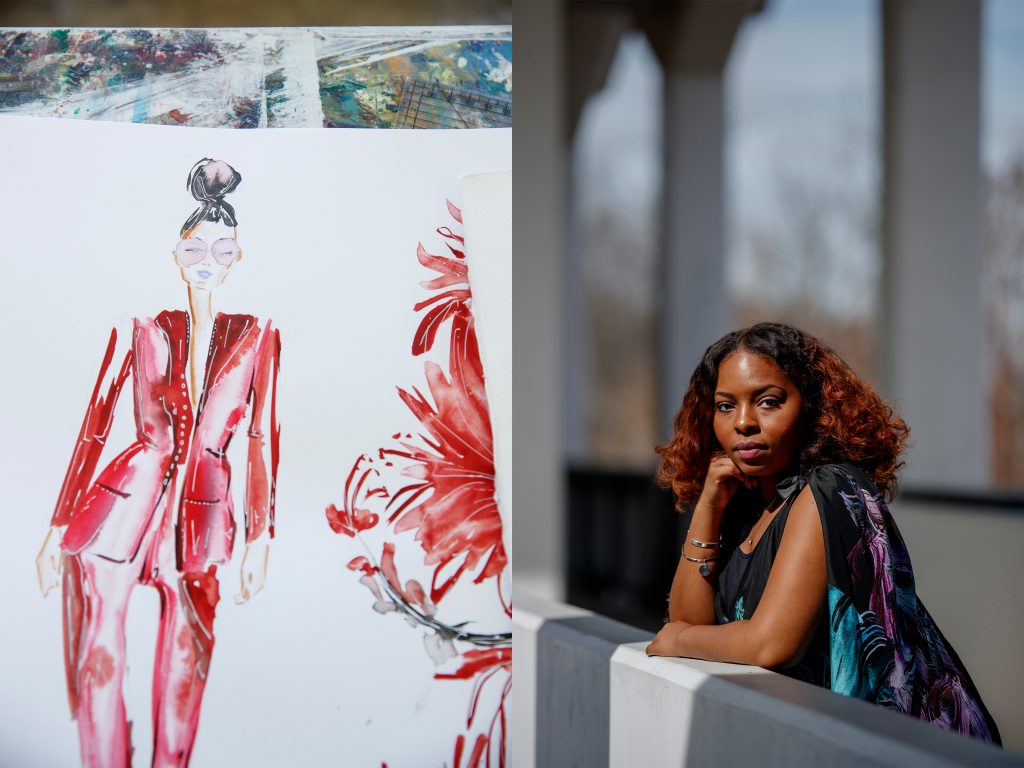 “The initial process is research,” she said. Keys, who spent time at St. Jude Children’s Research Hospital as a child, turned to her original doctor for help. “He gave me some old blood smears … and photos from other patients that might have blood disorders. Then I met with people who have sickle cells just to get some symptoms. … Then I spread out all this research and decided what components I wanted to take.

“The first thing was the colors – the colors of blood as it oxidizes. When you get a bruise, it’s blue, and it might turn purple. Then, when you bleed, it might be a bright red, but as it dries it’s (darker). So, I wanted that to be the palette for the collection,” she said. Several of her garments also incorporate panels and pockets that resemble the shape of a blood cell.

After sketching her initial designs, Keys then began to test different types of fabric and piece garments together on test models and mannequins to see how the design would fit and flow on the human form. Her specialty is in travel wear for women, so all-day comfort and versatility are important elements in her work. 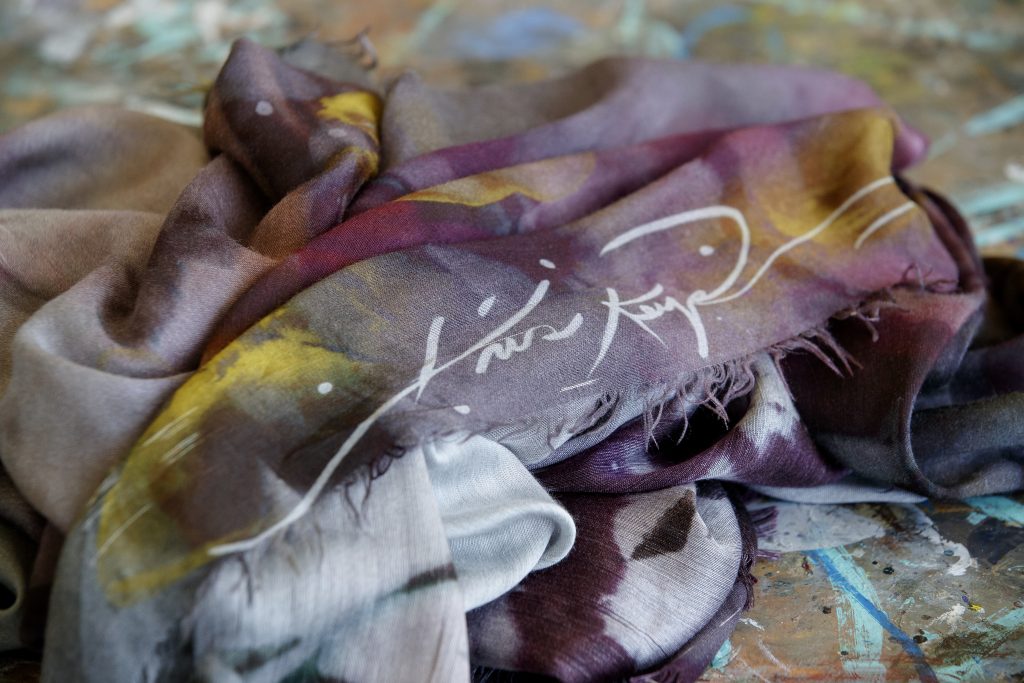 “I did a lot of testing to see if (the garments) travel well,” she said. “I sat in airports and bus stations and train stations, and I observed people to see what they were wearing. Then I talked to them to see what their problem points were when they traveled.”

After deciding what type of garment she wanted to create, Keys began to use her own blood smears to design the pattern of the cloth itself.

“I took those prints that I had from the hospital (in London) and started to scan them in and play around with them digitally,” she said. “(Then) I printed them off on small swatches to see how they would look on different fabrics. I came up with two prints, ‘Red Blood Cell’ and ‘Jaundice’” (a common symptom of her condition).

Patterns such as these are created on a computer by taking an original section of artwork and manipulating it many times until the desired look is achieved. Then, the files are sent to a special digital printer which prints them directly onto bolts of fabric. Key sewed all her sample garments herself from fabric she had printed with her watercolor designs. Once a garment is ready for mass-production, a designer must send a “spec sample” to the factory. This set of instructions includes the number of pieces required to make the garment; measurements for every detail, including placement of pockets and width of hems and collars; and the specifications for hardware such as buttons and zippers. The factory can then scale the instructions to fit a range of clothing sizes. 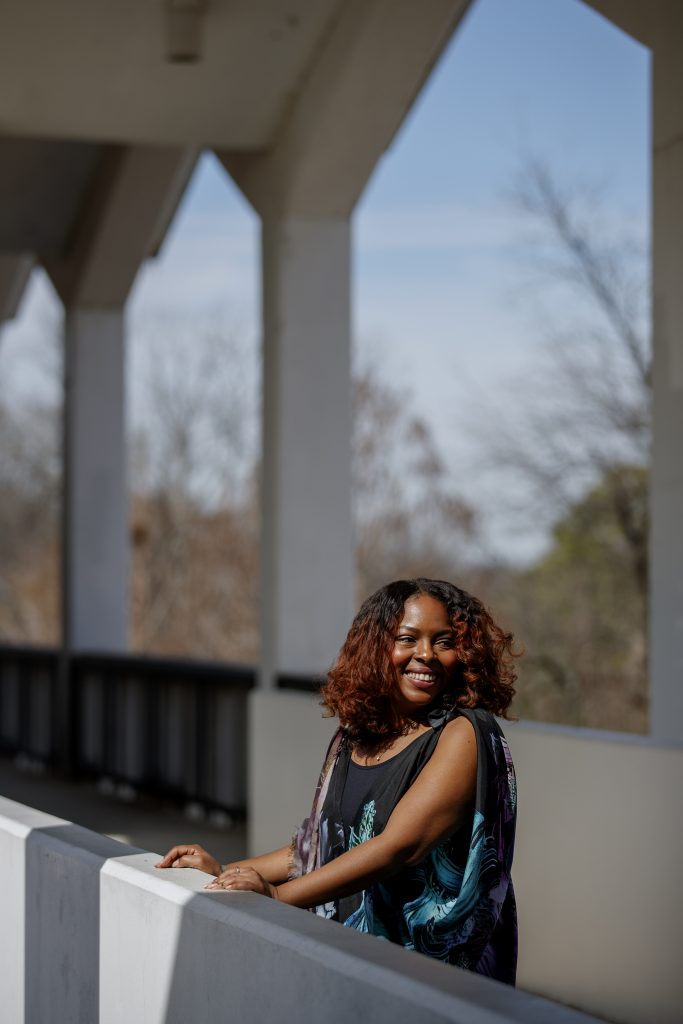 While Keys says her time in fashion illustration was originally a way to network with designers and fund her fashion education, she has realized how those experiences helped prepare her for the creation of her own original patterns.

“All my garments are textiles that I’ve painted, and they’re printed on the garments. It was great that I had to take that detour to do illustration first because I knew how to paint and how to transfer it onto fabrics, which I think sets my style apart,” she said. She not only wants those who wear her designs to find comfort in the clothing itself, but to recognize a unifying element in the patterns.

“I really want them to feel inspired, because every line, every collection that I have, it ties in a story where you can take beauty from anything and from any type of situation,” she said. “(My design is) personal, and it tells a story. Even though everybody doesn’t have a blood disorder, blood is a thing that everybody has – it merges race and gender.”

When you wear a pantsuit by designer Kris Keys, you showcase more than just a stylish figure – you take a stand for unity, compassion and the humanity that links us all.

To see more work from Keys, visit her YouTube channel: