It’s late summer in 2019 and Parker Stewart (‘19) hasn’t yet laced up his sneakers, drained a contested three-pointer or brought the Elam Center crowd to its feet after a thunderous fast break dunk. But his impact as a Skyhawk has already been felt.

Parker has completed the academic requirements to earn a bachelor’s degree from UT Martin.

It took him all of two years.

Parker, who wowed local fans as well as some of the nation’s top collegiate basketball coaches at nearby Union City High School as recently as 2017, became the first Skyhawk student-athlete to earn a degree in such a short amount of time. 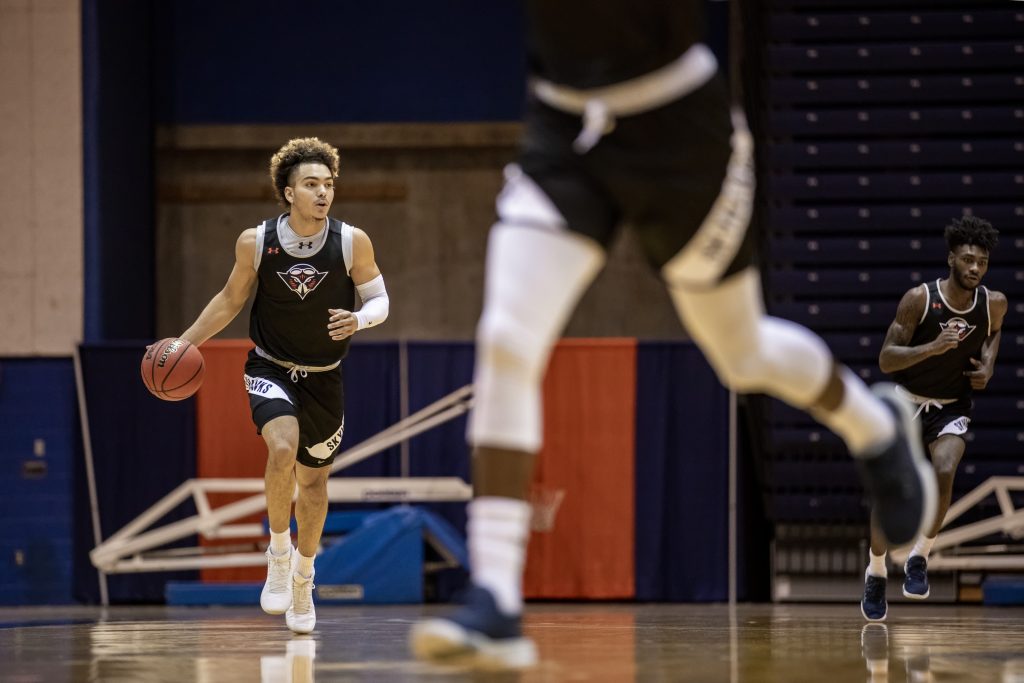 The remarkable feat began in the summer of 2017. Ranked as the third-best basketball prospect in the state of Tennessee, Parker chose to begin his collegiate career at the University of Pittsburgh. Having not taken any Advanced Placement courses in high school, he enrolled early to get a head start on his academics.

Parker breezed through six credit hours with all A’s on his transcript.

It would be a sign of things to come.

While national media pundits noticed Parker’s athletic prowess (he set a Pittsburgh freshman record with 71 three-pointers made), he was also making waves in the classroom. There he was, going off for 23 points and knocking down seven 3-pointers at national powerhouse Syracuse. He also took 17.5 hours of classes in the fall and 15.5 hours in the spring.

Parker’s father, Anthony, the men’s basketball head coach at UT Martin, kept up with his son from 650 miles away and made sure that both his academic and athletic potential were maximized.

“When Parker went to Pittsburgh, I actually called their academic adviser,” said Anthony, who is in his fourth season at the helm of the Skyhawk program. “Parker only had 12 or 13 hours scheduled in the fall, and I said ‘no, you better give him 18.’ Parker wasn’t just trying to do the norm or just trying to get by. He was capable of college-level work and that was our expectation as parents.”

Parker ranked second in the Atlantic Coast Conference in three-point field goal percentage (.425) in conference play and was also one of just 30 players to make the 2018 All-ACC Academic Men’s Basketball Team. However, a coaching change at Pittsburgh caused him to rethink his plans.

“I was going to major in speech pathology at Pittsburgh, but I hadn’t gotten into that yet. I was just getting the general requirements out of the way,” Parker said. “I decided to transfer to UT Martin, but they didn’t have the speech pathology degree so I wasn’t really sure what I wanted to do. I chose the interdisciplinary studies program because you can do a lot of different things with that.”

The NCAA requires that men’s basketball student-athletes must sit out a full season when transferring from one Division I institution to another. While Parker could still practice with the Skyhawks, he would not be able to suit up for a game until the fall of 2019. 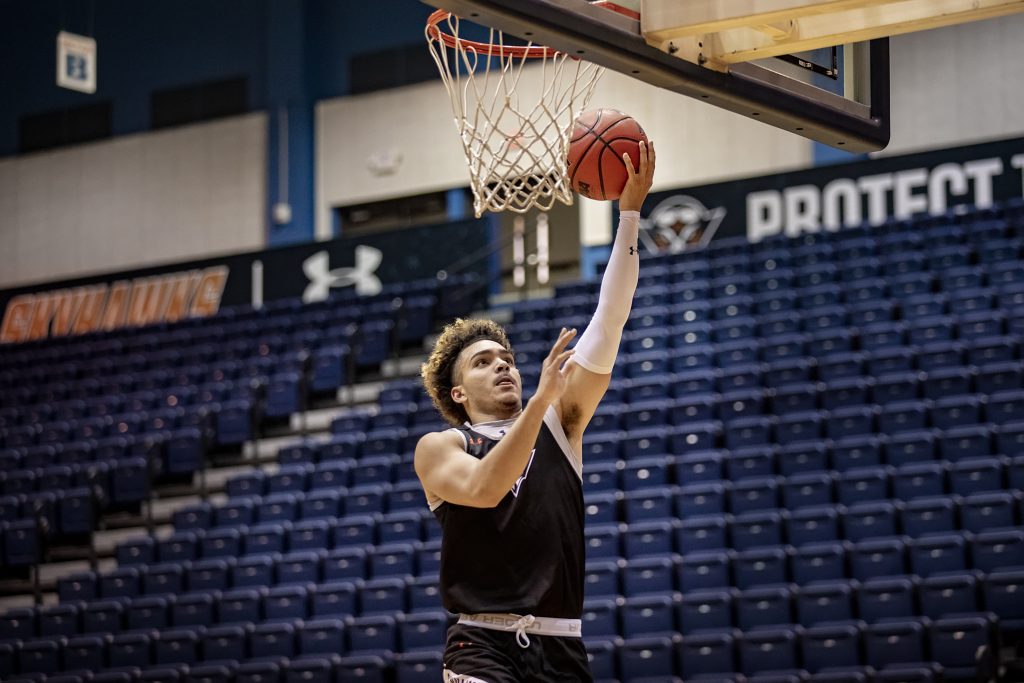 “I challenged Parker when he got here,” Anthony said. “I just told him that he has to sit out, he might as well take advantage of it and get as much schoolwork done as he can.”

Already facing a significant headstart on his academics and knowing he would not be able to play, Parker enrolled in 21 hours in the summer of 2018. He made six A’s and one B.

Soon thereafter, a blessing in disguise appeared. Parker suffered a hip injury which required surgery. He underwent the procedure in October of that year and, while he faced a grueling physical rehabilitation process, it opened up more time to focus on academics.

“I challenged Parker when he got here,” Anthony said. “I just told him that he has to sit out, he might as well take advantage of it and get as much schoolwork done as he can.”

“For sure, it was hard to balance everything since I was in so many credit hours,” Parker said. “But fortunately for me, I had a lot of free time on my hands while I had to sit out. Also, a majority of my classes during that season were online – I hadn’t had any online classes at Pittsburgh so that was pretty helpful once I got here.”

Parker finished out the fall term with 22 hours earned – eight A’s and one B – and picked up right where he left off in the spring. He accumulated another 21 hours with five A’s and two B’s, which gave him 103 total hours up to that point.

As Parker’s health progressed and he had his debut season at UT Martin to look forward to, his academic career nearly took a brief pause.

“Once I was almost to the end, that’s where it kind of started getting tough,” Parker said. “The last part was the hardest because I was so close but I knew I still had three years left to play. I was thinking I could take some classes throughout the year and then start graduate school, which I knew would take two years. But my dad told me I might as well finish up in the summer and start grad school in the fall, so that’s what I did.”

After passing 19 hours with flying colors in the summer, Parker officially earned his bachelor’s degree from UT Martin. He received his diploma in the mail but did not plan to walk across the graduation stage last December. He had a pretty good reason to miss the commencement ceremony.

“I was cleared to walk this December, but I checked our basketball schedule and we are playing (at UNC Asheville) on the day of graduation,” Parker said. “That’s ok – I will probably just wait until I finish graduate school to walk on stage. That’s my plan.”

“The whole idea of graduating early was to begin getting my MBA since I’d have the opportunity to have that paid through my athletic scholarship,” Parker said. “Grad school is obviously not as many quizzes and tests, but it’s more like 10-page papers. So I just have to make sure I’m on top of that, and I have to make sure I’m working hard to get better in the gym, too. It’s a juggle, but I think I’m doing alright so far.”

Overall, the math of Stewart’s two-year diploma is mind-boggling. Of the 47 classes he took over seven semesters, he earned an A or a B in 45 of those. His boasted a 3.8 cumulative grade point average, which is undoubtedly more impressive than any statistic he will accrue in a basketball jersey. 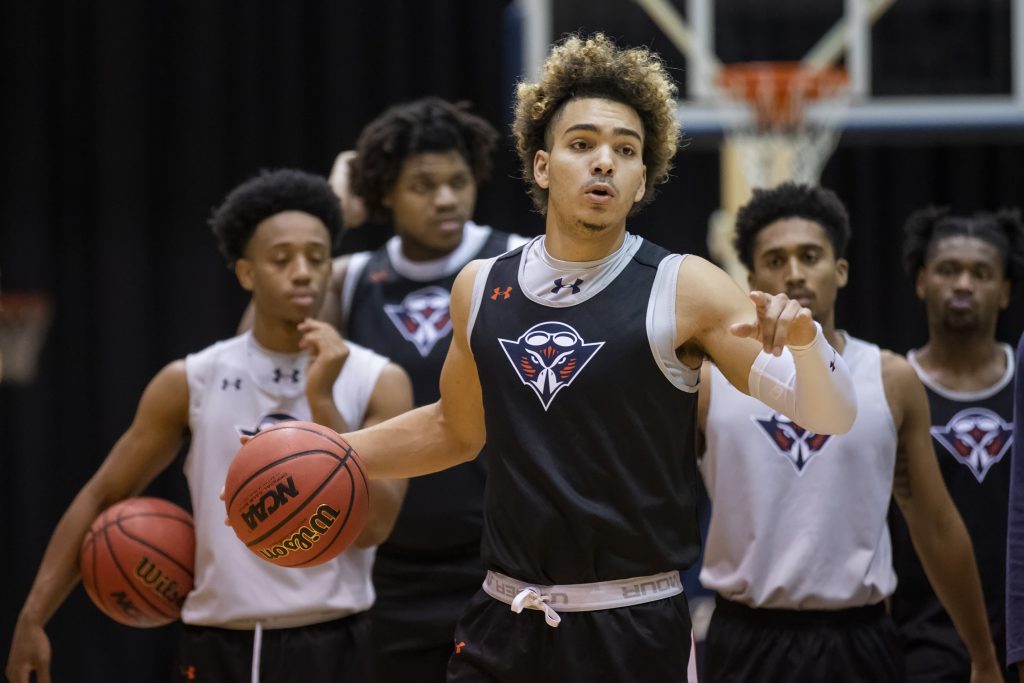 “Academics is of the utmost importance here at UT Martin,” Anthony said. “I know what my extended education has done for me and the people in my family. I don’t expect anything but academic excellence from our players. Since I’ve been the head coach here, we have literally had 100 percent graduation. During Parker’s freshman year, he wasn’t even here and his mother and I were very involved with his schedule, making sure the classes he was taking were making progress towards his degree.”

“Each of my parents played a big role in my academic career. They knew that I had a dream to go to grad school one day and pushed me to meet that goal.”

The Stewart family has made a home at UT Martin. Anthony joined the men’s basketball program in 2014 while his wife, Cheryl, recently began working in the Educator Preparation Program on campus. Parker’s brother Anthony earned a degree in information systems from UT Martin in May of 2018 while his sister Skylar is currently a sophomore biology major at UT Martin.

“I’m pretty much surrounded by family everywhere,” Parker said. “Each of my parents played a big role in my academic career. They knew that I had a dream to go to grad school one day and pushed me to meet that goal.”

While Parker’s athletic career seems to be brighter than ever – he has been tabbed as the Preseason Ohio Valley Conference Newcomer of the Year by Blue Ribbon College Basketball Yearbook – he takes comfort in the fact that his education has set him up for a reliable future ahead.

“Someday I won’t be able to play basketball anymore, and I understand that,” Parker said. “Just like when I hurt my hip – anything can happen so you always have to be prepared. I have a lot of ideas – I want to own a business when I get older. That’s why I am doing the MBA program – to get a good understanding of how to run a business and all of the aspects behind it.”