Practicing excellence in everything she does: Hayslett Achieves

Standing to the side of the TV set preparing for her first scene, she can see dozens of her fellow wardrobe and production assistants standing behind the camera, watching as the 6’6” entertainment legend calls the cast to action. On this day, Crystal Hayslett (‘06) was not finalizing the actors’ costumes for which she had been previously responsible. As Tyler Perry motioned for the set of the BET hit show “Sistas” to be quiet and called out “Action, Fatima!”, Hayslett stepped into the spotlight, and her dreams of being a star were finally in her grasp.

“I took that first step, and I was like, ‘girl, this is where you belong,’” Hayslett said.

As her coworkers, or work family as she considers them dearly, cheered her on after Perry called a wrap, Hayslett proudly realized the importance of what she had accomplished that day. Not only had all of her hard work and dedication been realized, but she also now represented every person who has a dream bigger than their circumstances. From growing up in Martin, interning with Senator Lamar Alexander, becoming a personal stylist and costume designer, to starring in a Tyler Perry Studios production, Hayslett is proof that big dreams are achievable regardless of where a person comes from. 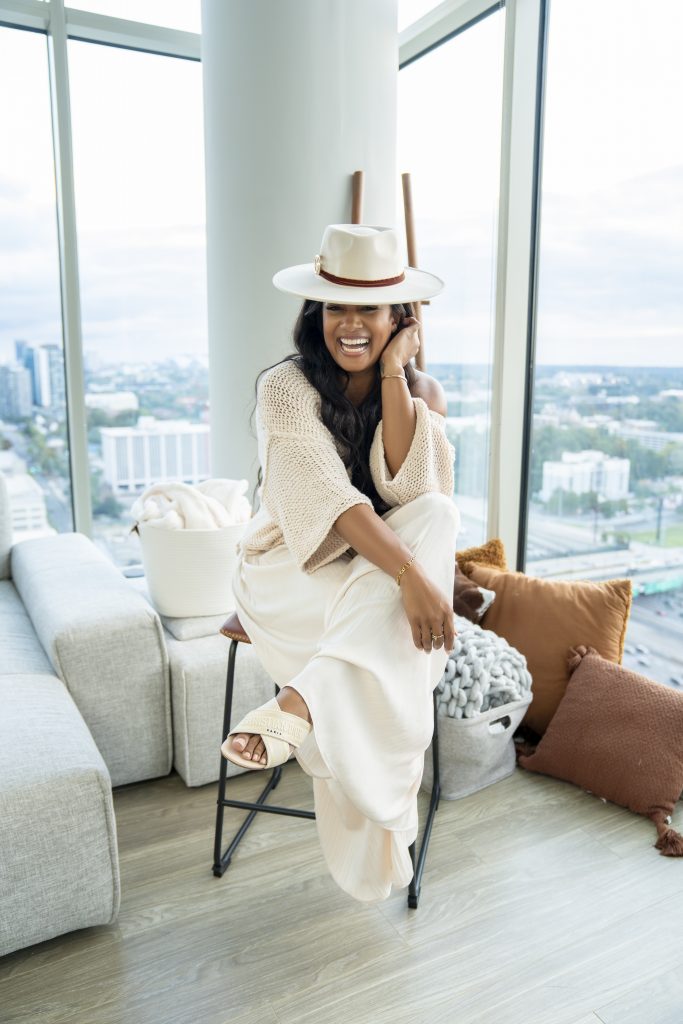 “I want to leave a legacy behind where people see my story and believe that they can do anything no matter where they’re from,” Hayslett said. “I just want to give people that hope that you can do whatever you want to do. It doesn’t matter your circumstances.”

While Hayslett planned to pursue her passion for the entertainment industry after graduating from UT Martin, an opportunity to work for Senator Alexander in Washington, D.C., arose during her junior year of college, and she knew she couldn’t pass on it. After finishing her degree online, Hayslett knew it was time to take what she learned working at the capitol, follow her dreams and move to Atlanta to begin her career as an actress and musician.

Hayslett struggled to get her foot in the industry door, but eventually earned an entry-level production assistant position at Tyler Perry Studios in 2012 while working on her music career. Having an eye for fashion, a skill she learned working at Sugar & Spice, a local boutique in Martin, Hayslett was hired and began styling characters for the upcoming movies in production. Perry himself even noticed her taste in fashion and work ethic, leading to an offer of a lifetime: a chance for Hayslett to rebrand Tyler Perry’s wardrobe. 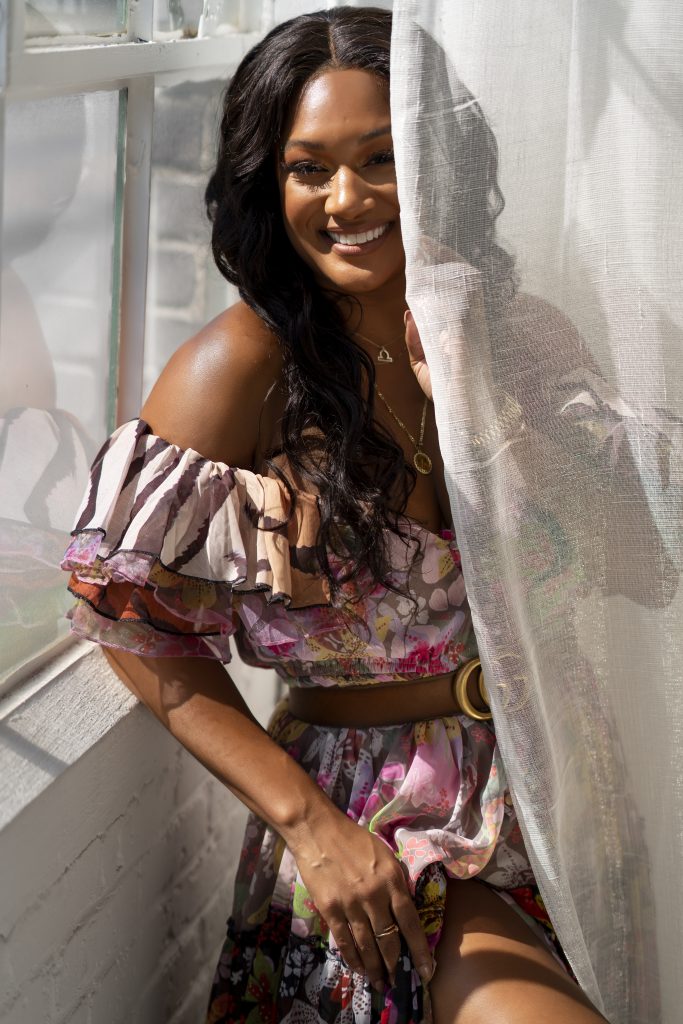 After a successful trial run, Perry began relying on Hayslett to style his look for every event, including a trip to New York City for The Tonight Show Starring Jimmy Fallon, which Hayslett will never forget.

“We ended up in New York to (be on) Jimmy Fallon, and I knew I was helping revamp his wardrobe, but I didn’t know if I was his stylist. I never got a contract,” Hayslett explained. “I was putting on his shoes, and I asked, ‘So, what are we doing?’ And he said, ‘You’re my stylist.’ It was kind of funny, that was kind of an iconic moment to be on Jimmy Fallon, and that’s when you find out you’re Tyler Perry’s stylist.

“I’m just grateful that God chose me to be responsible because being someone’s stylist is a very super intimate job. You’re around that person a lot. You hear a lot of conversations, and it’s such a very safe space, sacred space. So the fact that I was chosen to be responsible for that meant a lot to me,” Hayslett continued.

Not only was Hayslett responsible for rebranding Perry’s entire look, but also for styling the characters in his productions, including “Madea” herself, drawing inspiration from fashion icons like Beyonce’s leotards and wide brim hats. On any given day, Hayslett would find herself styling over 100 characters, ensuring each outfit is unique to their personality and did not clash with anyone else.

While she has an obvious skill for fashion, Hayslett’s heart still longed to be in front of the camera, not dressing cast members behind the scenes. For the five years she worked as Perry’s stylist, Hayslett did not audition for a single TV show or movie. Little did she know that as she and Perry grew closer, he found inspiration in her life story and decided to write a character in his new show “Sistas” based on her personality. As a consulting producer on the upcoming show, Hayslett quickly realized this was her chance.

“As the script started coming out, I was like, oh my goodness, these are the stories that I talked to him about dating and what my friends are going through. I’m seeing some of my personal things pop up and I (realize), this is it,” Hayslett said. “You know, all those years I had been auditioning and being a background for different movies and TV shows, I felt like something finally resonated within me. And he didn’t even know that I wanted to act! So, I said, we’ve got to do this. And he was like, ‘I think I got something for you,’ so he created the character for Fatima, and the rest is history.”

Having spent the previous five years watching the productions of hit TV shows and movies, Hayslett had been studying and preparing herself for the exact moment Perry called “action, Fatima!”

As a paralegal in the show, Hayslett originally planned on using her life experiences to influence her character, but Perry wanted to see the personality he had worked with for so many years shine through Fatima. 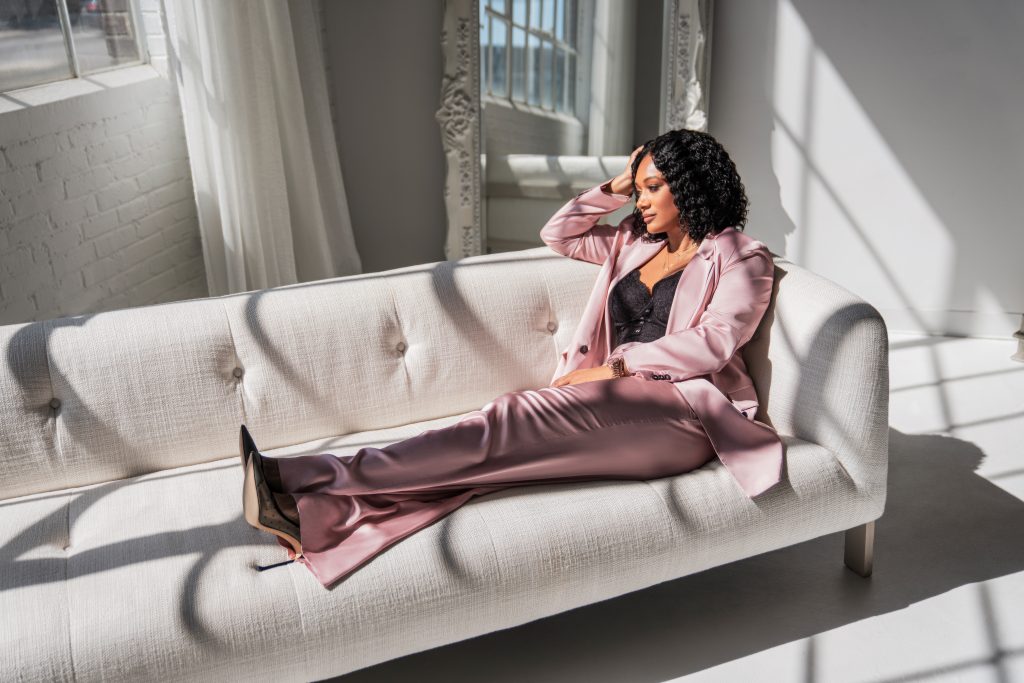 With a little instruction from Perry as to how Fatima should be portrayed, Hayslett quickly found herself in the story and became a natural on set.

“Once I found my rhythm, it was just like I’d been acting the whole time. He was actually shocked that I didn’t need too much direction, but I take from his work ethic,” Hayslett said. “It was all of those years of me working on set, being a costumer or watching other actors. I was studying the whole time I was watching. … I was really trying to be on set every single day with so many amazing actors and to be there firsthand to watch how he would direct them and how they would react and adjustments that they would make. I really learned so much just from being in that environment.

“I always tell people, if you can find a job that’s in the arena of whatever you’re trying to do, that’s the best learning tool because you’re basically getting hands-on experience,” Hayslett said. “It paid off. It definitely paid off.”

Hayslett has never let her humble beginnings in rural Northwest Tennessee deter her from chasing her dreams and is thankful for the confidence others have shown her from every production and wardrobe assistant she’s worked with to even Perry himself.

“It’s funny, you never would think that a girl from Martin, Tennessee, would be friends with Tyler Perry.”

As Fatima’s fanbase grew through season one of “Sistas,” she quickly found herself rewritten as a main character in season two and had to give up costume designing to focus on her new role. Now as Hayslett looks back on her acting career so far, she is thankful for the opportunities she’s had
to grow in her skills and confidence as she has excelled on camera.

Even during difficult times, Hayslett continues to “practice excellence in everything,” which she says is a lesson she learned in her early years in Martin. While Hayslett says she is fortunate to be where she is now through dedication and faith, she remains humble as she knows how hard she had to work to earn her position.

“I don’t forget when I was down there putting on someone else’s shoes. Those are the things that are really important to remember that just as quick as they come, they can go,” Hayslett said. “I think the biggest thing is just always staying grateful and having a spirit of gratitude.”

“Practice excellence in everything you do.”