Martin’s first Tennessee Soybean Festival in September 1994 provided an early opportunity for Josh Breeden (’07) to display his artistic talent. Having recently broken his right arm, the right- handed 10-year-old claimed first place in a poster contest with one arm tied behind his back, so to speak. Even from the start, overcoming obstacles has never kept Breeden from making his mark in the art world. Today, he spends his days working as an award-winning art director at the Memphis-based creative agency Loaded For Bear, and continues his own prolific side hustle as a fine artist and graphic designer under the pseudonym St. Francis Elevator Ride. 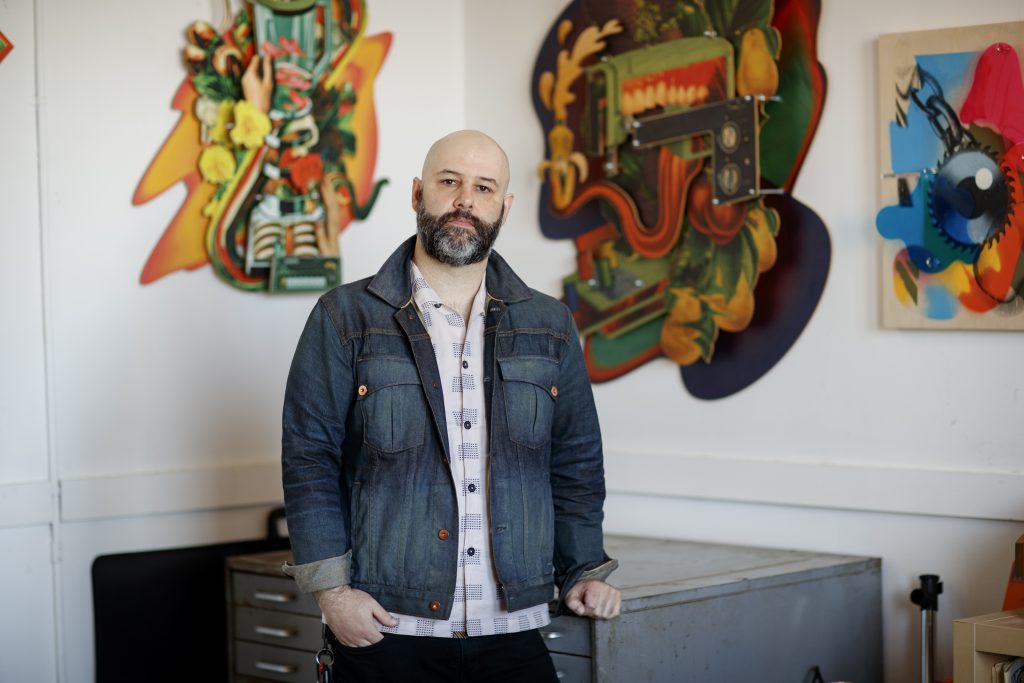 Josh Breeden lived his first 23 years in Martin, earning a BFA in the Department of Visual and Theatre Arts. His father, Charles, and mother, Dinah, don’t have college degrees, but his father is an electrician by trade who worked many years for the local telephone company. He is also an accomplished entrepreneur who owns businesses ranging from mini-storage facilities to rental houses. “He’s made a nice way for himself,” said Breeden of his recently retired father. “My dad is really good at turning ideas into smart business opportunities. He’s got a knack for staying busy with projects he can maintain on his own terms.” He credits his father with teaching him a work ethic that has served him well in the graphic-arts business.

Breeden has many interests, including music and record- collecting, but drawing has been with him from the beginning. However, it wasn’t until he met UT Martin art professor Lane Last during a college art day that he learned about graphic design and the related career possibilities. “I really got tuned into him when I started to see posters he was designing for a local band up around Martin, and they were quite good,” Last recalled. The long-time faculty member planted the idea of bringing together that love for drawing and music, and Breeden began toying with the idea of what it would be like to design record packages. 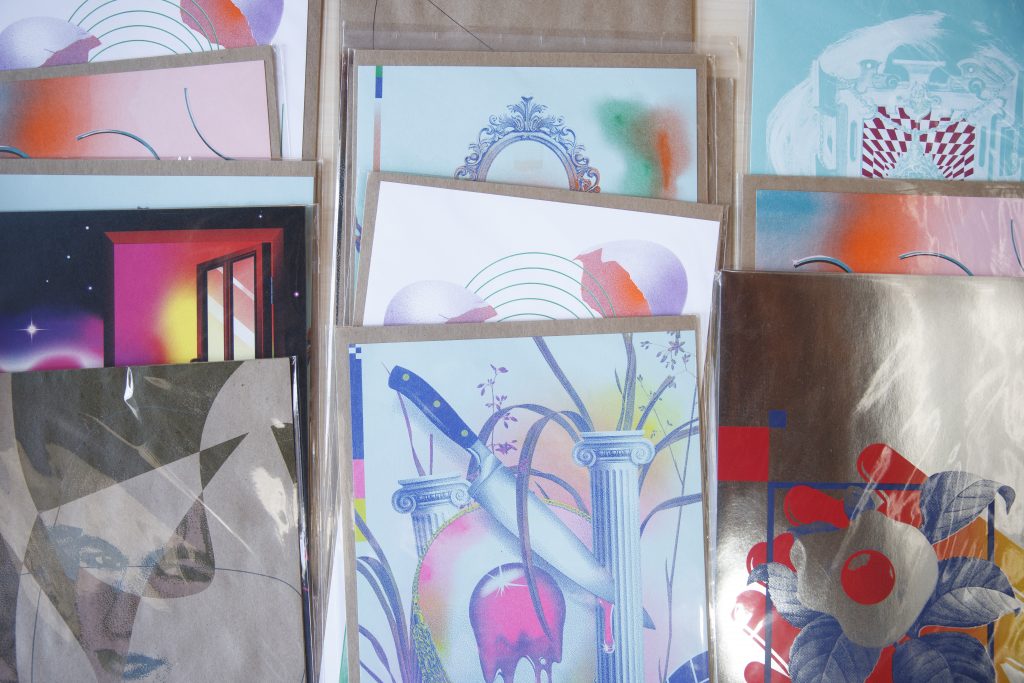 “I always tell younger people, to become a really great designer, you need to know the fundamentals of print production. That sets the foundation of designing for real- world needs,” he said.

As an undergraduate art student, Breeden learned the importance of picking up practical design skills. Breeden cut his teeth working two years for UTM’s in-house Printing and Duplicating Services, a job that saw him through graduation and provided invaluable early experience. Adding to his portfolio of knowledge, Breeden and two friends started their own screen- printing business in a small garage where the heavy ink fumes and late nights were a fun distraction from school. Though a shortly lived venture, it gave the young artist another opportunity to develop his burgeoning talents with a real-world application. 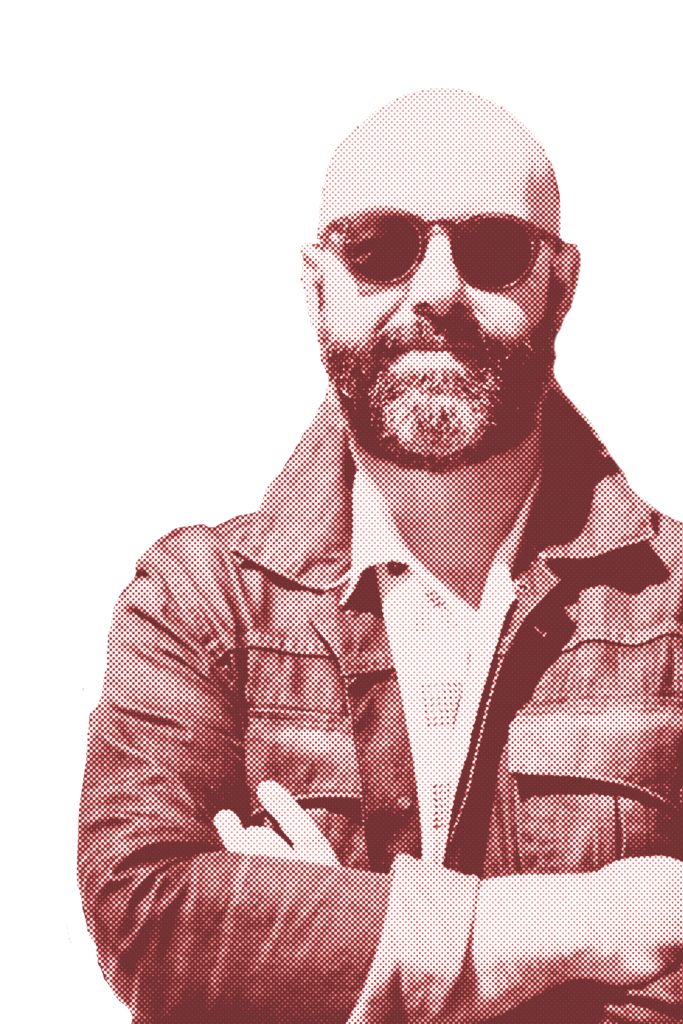 Breeden’s initial full-time graphic-design jobs fall squarely into the “paying-your-dues” category. He first landed a production-artist position with Coca-Cola in Memphis, where he produced point-of- sale display art commonly seen at grocery stores and gas stations. “I was like a one-man print shop cranking out massive cold vault murals,” he recalled. “Then I’m also the one answering the phones, dealing with sales reps and keeping up with print inventory.” The grind prompted a change about two years later to Bluff City Sports where he again pursued his passion for screen printing, designing T-shirts and apparel.

During these early years in Memphis, Breeden — always a lover of side projects — began working with bands and music venues. From flyers and albums for small local acts to touring posters for nationally known artists, his work soon began showing up on everything from stickers and shirts to albums and dive bar walls.

His professional life then took a fateful turn when he met Michael Carpenter, the principal and creative director at Loaded For Bear. They shared an interest in music, and both were creating content to support bands and musicians. For Breeden, the Memphis music scene provided opportunities to build a robust freelance portfolio, similar to Carpenter’s path. “We were kind of cut from the same cloth, and we had that common ground,” he said. “I think he (Carpenter) understood that immediately and saw that I was doing all these other things outside of what I was doing during the day. I think he could really see the work ethic and how much I was putting into my art practice.”

Breeden maintains a studio space located on the second floor of the 1940s-era Greyhound Bus Terminal near downtown Memphis. The trolley tracks run south in front of the old bus bays toward downtown and, just to the southwest, the top of the Pyramid peaks over the horizon. It’s a classic Memphis locale that has been converted into art and maker spaces. At the top of the stairs, the original wood-framed ticket windows sit dark and silent, the perfect view to welcome historians, curiosity seekers and creative types alike.

Filled with organized clutter that someone would expect to see from a working artist, Breeden’s studio is a hodgepodge of tools, worktables, a computer workstation and two intersecting walls displaying complex 3D art creations, some finished and some in progress. 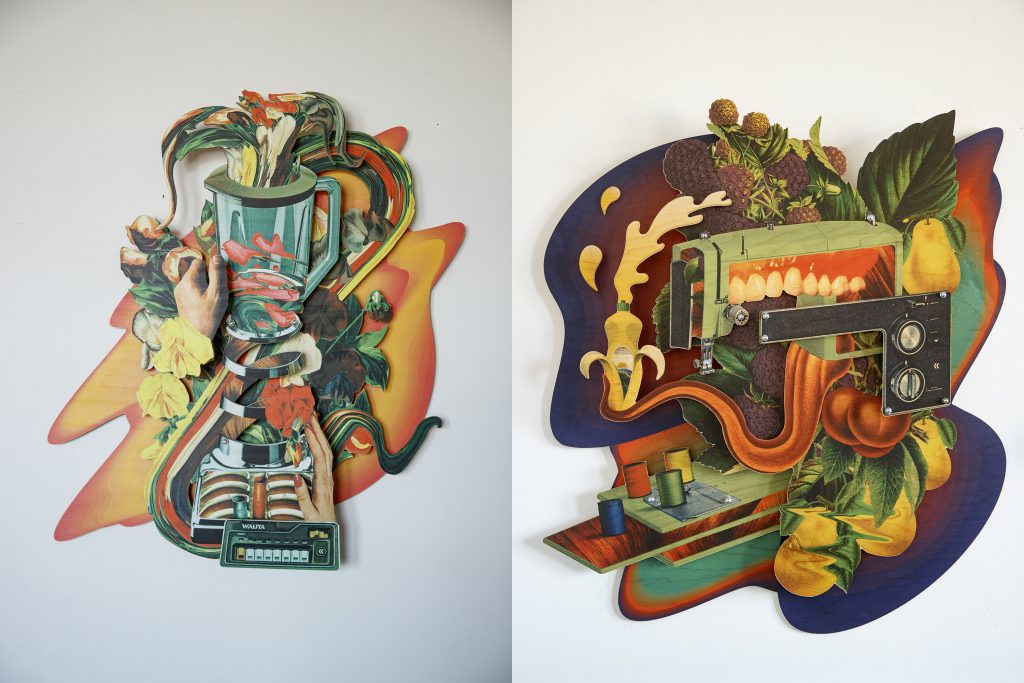 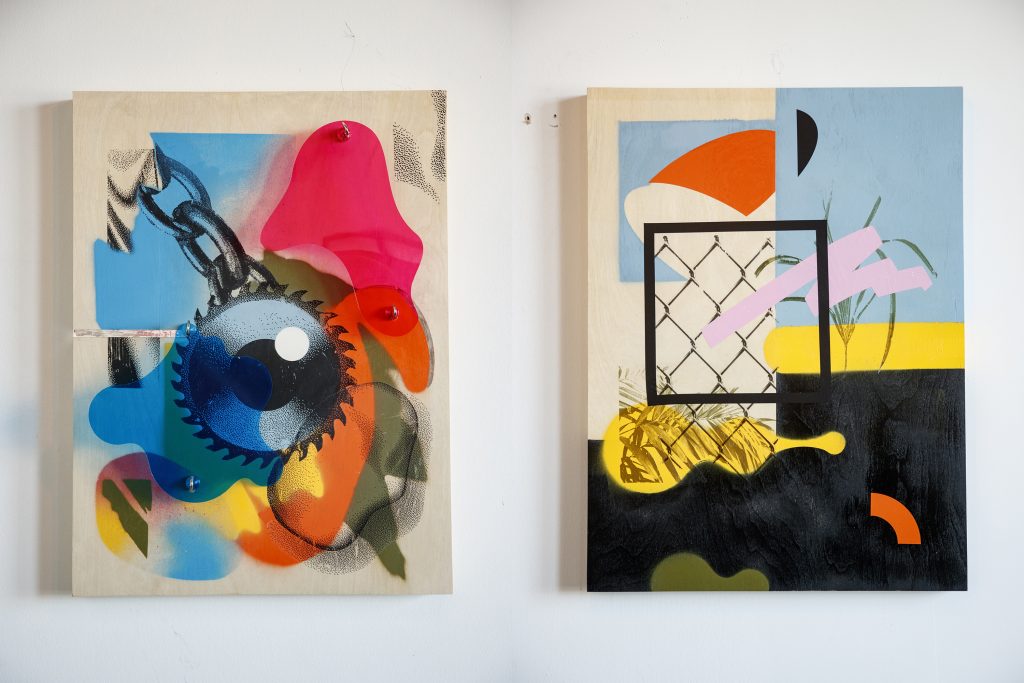 “I don’t really know how it started. I’m not a musician,” he said. “In high school, we just got into punk rock and all kinds of weird music, and we loved just being able to get our hands on it and collect it.” He moves across the studio to a collection of LP sleeves, CD cases and cassette packaging he’s designed over the past 10 years. One of his most frequent collaborators is musician Jake Vest, a former Memphian now living in New York City. “His (Vest’s) taste and visual aesthetic seem to always be in line with mine,” Breeden says. “He’s just always been my favorite to work with, and he’s such a brilliant musician and super talented.”

Breeden’s cherished work with Vest and other musicians benefits both the artist and the client. For him, the work is “kind of freeing” in that these are his personal projects, while for the musicians, “I’ve developed the reputation now where people come to me because they like my style. I’ve worked hard to create a look that is recognizable as my own, and it makes me happy.” Holding up a torn-out page from a 1970s Sears catalog, Breeden points out just one piece of inspiration. “I mean, look how yellow this paper is,” he says. “It’s been around forever and no one’s seen it in so long. I love being able to repurpose artifacts like this with other ephemeral snippets to create something brand new that feels just as timeless.

“That’s certainly the process for a lot of this stuff —collecting and finding old things, scanning and re-manipulating, cutting and re-coloring. Taking it as far as I can go is always what’s cool and kind of fun about it.”

One of his signature projects materialized after Breeden was contacted by MTV and asked to create digital and print spots featuring the 2015 Video Music Awards host, Miley Cyrus. 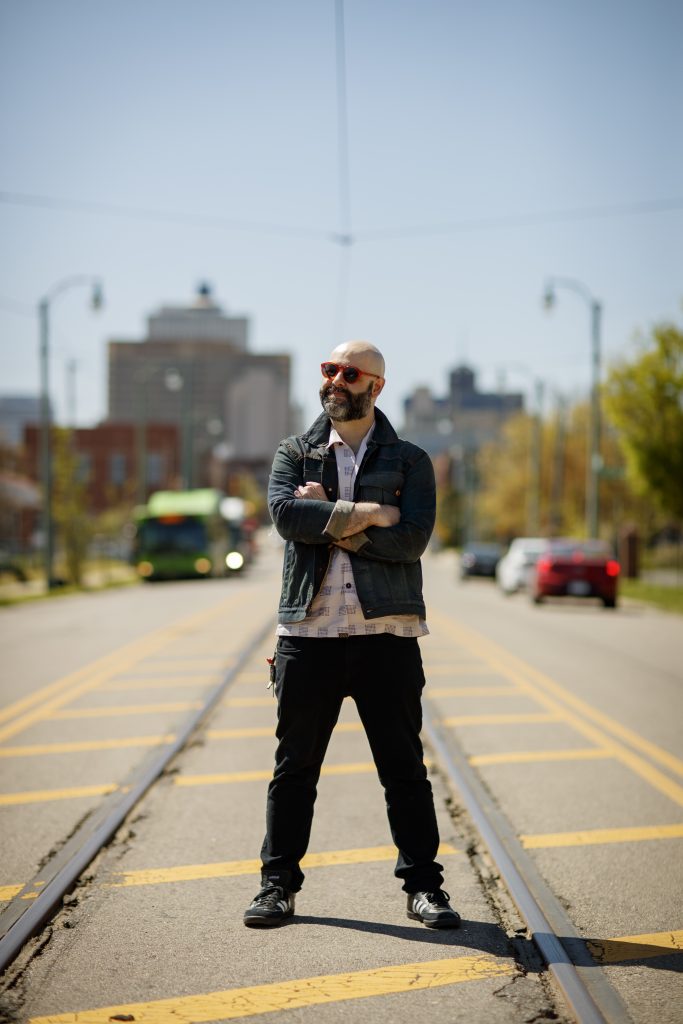 “It was a hectic production schedule with little turnaround time, but the next thing you know, it’s up in Times Square,” said Breeden. “It was definitely a thrill to see something that started so small become so huge. Friends visiting New York were sending me photos of my work on the side of buildings downtown and in subway platforms throughout the city.”

Even though Breeden is a successful freelance artist, he sees his long association with Loaded For Bear as vitally important to his career and his growth as an artist. While his music connections bring him great satisfaction, so does his involvement in agency projects such as the Crosstown Concourse. Originally opening as the Sears Crosstown building in 1927, the center closed in the early 1990s and was vacant until the non-profit agency Crosstown Arts reimagined the space in 2010 as a “vertical urban village.” The facility reopened in August 2017 featuring education, retail, health care and more. The agency was challenged with the daunting task of creating all wayfinding in the 1.5 million-square-foot facility.

“You think about map directories that are hanging on walls and you think about the ‘in’ and ‘out’ of the parking garage — there’s so much involved in every detail to help people find what they need and get where they want to go,” said Breeden. “What I love about working with Michael and (the agency) is every single piece is tied back into a single story that showcases the history of the building and what this space has meant to Memphis over the years.”

Breeden’s agency and freelance work have continued during the pandemic, but the lack of direct interaction has had a definite impact. Working remotely has made the creative process more challenging for Breeden. “It’s been a tough year because we’re very hands-on and very collaborative in our process,” he said. “Creativity doesn’t naturally come through us talking on screens. It’s just in the atmosphere when we’re together.” However, one thing that remains unchanged is Breeden’s drive to challenge himself personally and professionally while making work that satisfies him as an artist.

“I just really love it (the work). … I never get tired of it, even when I am burnt out on it,” he said. “I’m always thinking of my next project or chasing my next opportunity, no matter how big or small it is. Maybe that’s just something ingrained in people’s DNA. I don’t know if I have any special advice to motivate people to do this. It’s hard, it’s very hard, and you have to have a thick skin.”

Toughness just might provide the magic for Josh Breeden’s success – the kind of toughness and determination that wins a poster contest even when the arm you learned to draw with is in a sling.