Athletes making the grade with an assist from academic support staff

With the many twists and turns that everyday life has delivered since the spring of 2020, one thing has remained consistent in the University of Tennessee at Martin athletic department: the emphasis the Skyhawk academic support staff has placed on the first half of the phrase “student-athlete.”

When the COVID-19 pandemic halted collegiate sports in March of 2020, uncertainty was abound everywhere. Amongst a new academic curriculum that no student-athlete had encountered in their life – online-only courses and isolation from teammates/friends/family, to name a few – UT Martin’s athletic department generated a 3.26 Grade Point Average for the spring 2020 semester, a record at the time.

Seven months later, the Skyhawk Athletics grades were tallied for the fall 2020 semester, and UT Martin had delivered a new benchmark for academic excellence with a 3.28 GPA.

The spring 2021 semester brought another highlight for academic success as the Skyhawks were responsible for a 3.29 GPA – its third record in as many semesters. 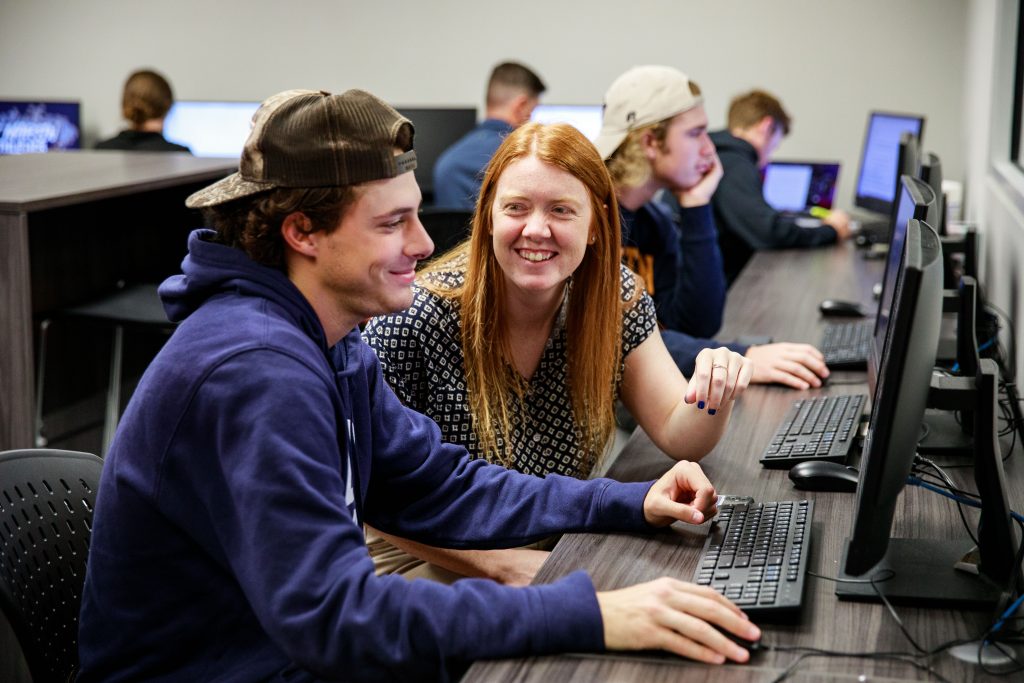 “Our staff deserves a lot of credit for all the records we have broken over the last 18-plus months,” McGuffin said. “They are professionals in every sense of the word – they care for our student-athletes like they are family. Of course winning is important – we hang scoreboards for a reason – but at the top of every athletic director’s priority list is establishing a track record of sustained academic success. Thankfully, we have done that here at UT Martin and I truly feel the best is yet to come.”

A Martin native, Bynum attended the University of Tennessee College of Law after earning her degree from UT Martin. Following her 2016 graduation in Knoxville, she started a private practice in nearby Dresden before joining the Skyhawk athletic department in a compliance role in April 2017 – a month before McGuffin was hired to lead the department.

“Kurt identified that while compliance is more my skillset, academics was something I was passionate about, too, as far as making sure kids have the adequate resources to be successful,” said Bynum, who oversees the academic support staff. “I was able to transition into the academic area of helping student-athletes build their self-esteem to a level of being able to excel in the classroom when they’ve always just been successful on the field.”

Sparks also joined UT Martin Athletics in 2017 as it was just her and Danelle Fabianich heading the departmental academic progress at the time. Sparks brought along experience in two other full-time roles on campus before her move to athletics, which was a breeze for the Union City native.

“I’ve been around UT Martin all my life – I don’t know if I’ve ever missed a Homecoming,” Sparks said. “Growing up, I saw Skyhawk student-athletes who had become my coaches, role models and mentors. I wanted to make an impact on our current wave of student-athletes like they’ve made on me.”

A little under a year later, Duncan (pictured right with Skyhawk student-athlete Benny DeTrude) was wrapping up an All-Ohio Valley Conference career on the softball diamond at UT Martin and was in the midst of an internship under Fabianich studying all facets of the athletic department. When McGuffin began making plans to reshuffle the department’s academic chain of command, Duncan was immediately interested in the gig.

“One of my biggest motivating factors was being that person that I needed when I was in the student-athlete’s shoes,” Duncan said. “Whether that’s on the physical stance, academic stance, emotional, mental – whatever is needed of me during the day, I want to be that person. It means a lot to me as an alum to know that this university keeps growing and figuring out ways to better serve the student-athletes, and the academic branch of our organizational chart is no exception.” 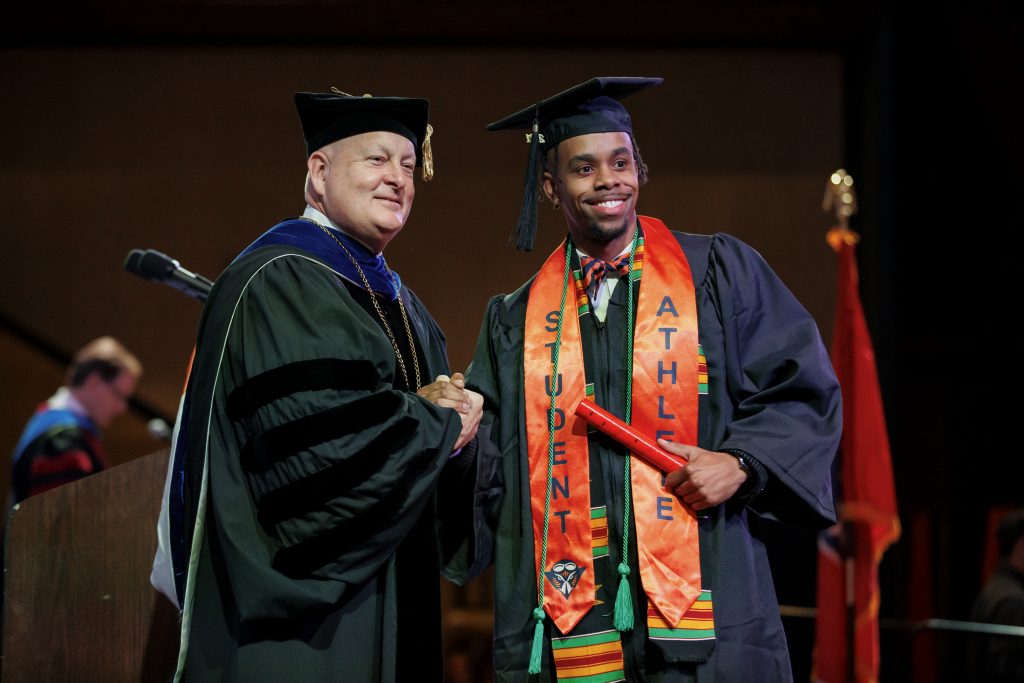 All parties agree that a turning point in the department’s recent rise in academics came in February 2019. After months of hard work and countless hours of research, Bynum submitted an application for an NCAA grant regarding the Accelerating Academic Success Program (AASP) initiative. In July, the NCAA announced that UT Martin was one of three universities to each receive $100,000 to help their student-athletes earn their degrees.

In addition to $20,000 raised by private donors, Skyhawk Athletics now had the funds to implement a real change. The biggest identifiable need was a state-of-the-art computer lab, which would turn out to be more valuable than anyone would know when the collegiate academic world turned all virtual just a few months later.

“We had a three-computer lab in athletics that was basically just a small office space where our student-athletes would print items and then go study elsewhere,” Bynum said. “We wanted to give them a space for collaborative work that featured supplies, nutritional snacks and drinks in a comfortable common area setting.”

The vision soon became a reality as the computer lab officially opened in October 2019, located in the main hallway of the athletics suite. The spacious room is open during all lab hours and is commonly used for various team study hours as there are usually an average of six to 12 student-athletes in there at all times of the day accessing the 18 computers.

“The academic computer lab has made a world of difference,” Sparks said. “If anybody has a question or needs anything, we’re just right down the hall. The academic results speak for themselves but even taking academics out of it, it’s brought our student-athletes closer because they’re in there mixing and mingling – interacting with each other outside of their majors and teams. It’s led to an outpouring of interdepartmental support where our student-athletes are showing up at each other’s games.”

Sure enough, the first full semester that the academic computer lab was in operation was spring 2020, which started the active run of record GPAs for Skyhawk student-athletes.

The final piece of the academic support puzzle came in September 2020 in the form of Bufford, who was teaching in his hometown of Trenton when he got a call from Bynum. A position had opened up thanks to the McLendon Minority Leadership Initiative, which provides minorities a jumpstart to their careers through practical experiences, opportunities to build their network and instilling the values of the legendary late Coach John McLendon: integrity, education, leadership and mentorship. Bufford was the perfect match, and he has fit in seamlessly to UT Martin’s budding academic operation.

“I draw great pride in my role,” Bufford said. “I wake up every day really motivated and ready to help our student-athletes actualize their goals, whether those are in this semester or long-term within professional development or career placement. I see their potential, and I’m extremely grateful that I get paid to support them and help them figure out this stage of their lives.”

Fabianich says she is blessed to work alongside four alums who show a passion for their job on a daily basis.

“We have a really good team, and all four of them are great at their jobs,” Fabianich said. “They hold our student-athletes accountable, and that’s shown in our GPA growth. Ashley did an amazing job putting in the work to get the grant that made this all possible. Nothing has made us happier than seeing our student-athletes rise to the occasion semester after semester.”

In addition to the educational guidance that the academic support staff has provided in recent semesters, all five members have also placed a big emphasis on mental health. Their office doors – and ears – are always open for any struggling student-athlete who has had to adjust to the unprecedented circumstances the world has dealt.

“We are a second eye to what they do on a daily basis,” Duncan said. “We’re always making sure they are progressing towards their degree and are always down to help for graduate school and internship applications, but it’s more than that. Speaking as a former student-athlete, I knew if I was doing better in the classroom, I did better in practice and games because I wasn’t stressed about as many things – I could actually enjoy playing the game I love. There are a lot of outside factors like time-management skills that we also try to hit to make our student-athletes successful in all stages of their collegiate experience.”

“We check in with our student-athletes regularly and let them know we are in their corner,” Bufford said. “They are the captains of their ship – we’re their shipmates. The last year-and-a-half has been a mental and emotional strain for everybody involved, but our student-athletes have been resilient across the board and shown an ability to change. They’re at a very formative time in their lives where it was easy to quit, but they put their hardhat on and kept at it. If they can show that type of determination as 18-to-22-year-olds, there’s no telling what they can do in their field of profession.”

With a departmental roster boasting 475 student-athletes the Skyhawks’ academic support model has proven to work. At the heart of that achievement has been a personalized approach that Bynum is proud of.

“We sit down with the student-athletes, look at what they have to do, and provide information to them in a way that they can take it and do it on their own time and succeed with that objective-based list,” Bynum said. “What that does is instill the ability to understand that they are fully capable of doing this. A lot of what we’ve done has been geared towards ‘how are you as a person?’ instead of ‘how are you as a student-athlete?’. We’re giving kids opportunities that they may not have gotten elsewhere, and they’ve maybe never had anyone believe in them before. I’ll take 10 days of staring at spreadsheets if it means I’ve made a difference for one student-athlete.”