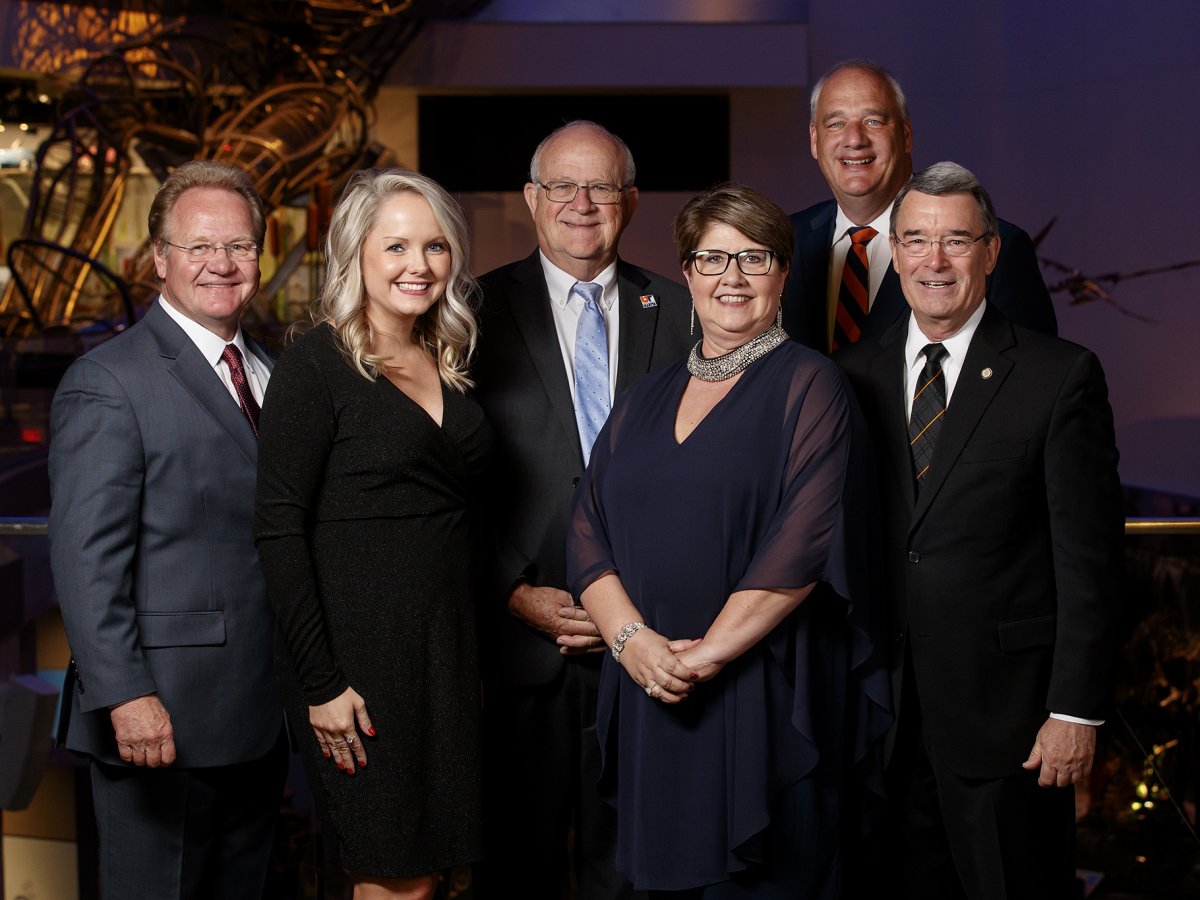 The WestStar Leadership Program has benefited from consistent leadership during its history, and current and past program leadership attended the 30th anniversary celebration Nov. 9 at Discovery Park of America in Union City. Pictured are (back row, l to r) David Belote, Dr. Nick Dunagan, Dr. Charley Deal and Dr. Bob Smith. Belote, Dunagan and Smith are former executive directors, and Deal is in his 10th year leading the program. Jordan Gardner and Virginia Grimes are pictured in the foreground. Gardner is administrative specialist and Grimes is in her 30th year as WestStar coordinator. The program was founded in 1989 at the University of Tennessee at Martin.

Effective leaders strive for consistency. The same can be said for successful leadership programs, and consistency has been a trademark of the WestStar Leadership Program throughout its 30-year history. Approximately 250 alumni, friends and supporters gathered Nov. 9 at Discovery Park of America in Union City to celebrate a program that has graduated 857 class members since its inception. WestStar is sponsored by the University of Tennessee at Martin.

WestStar, the state’s oldest and largest regional leadership program, began offering leadership development and education for select West Tennessee participants in 1989. WestStar class members typically come from diverse professions, backgrounds and volunteer leadership experiences, and over the past three decades, graduates have assumed leadership roles in their communities, counties and the state.

Following an opening reception, Deal welcomed attendees, recognized corporate sponsors and introduced UT Martin Chancellor Keith Carver, a 2009 WestStar graduate, who talked about WestStar’s longevity among leadership programs, noting the limited lifespan of some others. “When you look at WestStar, I think it’s remarkable that we’ve been in existence 30 years, but it’s really easy to see why. And I think the first thing is when you think about WestStar is it’s constantly evolving,” he said.

Carver credited Smith and Dunagan, both WestStar founders and UT Martin chancellors emeriti, for steadily improving the program’s curriculum and expanding beyond adult and community leadership education. He also recognized WestStar class members who seek ways to make West Tennessee a better place in which in to live and work.

Three members of WestStar’s first class attended the celebration, and Smith credited that inaugural class for setting the program’s tone. “I think it is because we all recognize that there is a purpose that has been fulfilled in our lives as a consequence of having this common experience,” Smith said to the audience. “You (the class of 1990) continue to be invested in this program so that same experience would be true for others.”

During the evening, other WestStar alumni commented about the program’s long-term impact on West Tennessee. Shannon Cotter, of Rossville, said the program has encouraged people from different backgrounds to help improve communities at the local level. “Those people who may have been a little bit shy to get involved, now that they’ve gone through WestStar, they have the little extra incentive, … that little extra push to say, ‘Yeah, I can do that. I can help make a difference,’” said Cotter, a current WestStar board member and project manager for SIC Management.

“I see WestStar including every county’s leadership in West Tennessee, and it (the program) offers a chance for every county’s leadership team to work together, and so no county’s left behind,” said Michael Overbey, current WestStar board member and general manager of Central Distributors in Jackson. “And so, when you think of WestStar, you think of all the counties in West Tennessee, not just a few.”

Annual class projects and the program’s board of trustees have contributed to WestStar’s staying power by consistently creating and supporting leadership-development opportunities and conferences beyond the long-standing leadership program. The Working Women’s Conference and the African American Leadership Conference, both in their 22nd years, regularly welcome top speakers and full audiences. FutureStar and RisingStar are more recent leadership-focused programs that benefit middle and high school students respectively. WestTeach is the newest program and gives K-12 teachers an opportunity to learn about economic needs and opportunities in West Tennessee.

WestTeach was a 2017 WestStar class assignment that’s now in its second year and, according to Art Sparks, provides a valuable experience for teachers. “This is bringing together educators across West Tennessee from the different systems to show them what assets there are in West Tennessee, a lot of which these teachers had no idea that were even here and that the job opportunities were even available,” he said. Sparks, of Union City, is a current WestStar board member, the current UT Martin Advisory Board chair and partner with regional accounting firm Alexander Thompson Arnold PLLC.

“(WestStar) continues to reinvent itself,” said Yvette Blue, associate superintendent and chief academic officer for Haywood County Schools. “Being a person in education, I appreciate RisingStar and FutureStar and now WestTeach. That’s important because, number one, any time we can bring in the youth, we work toward that goal of being able to sustain ourselves, whatever that organization is.”

The 30th anniversary planning committee believed so strongly in the FutureStar program for at-risk middle school students that the entire $5,700 in proceeds from the evening’s silent auction will be used to support that program. Finding ways to make a difference remains a consistent theme for a program long dedicated to making West Tennessee stronger.