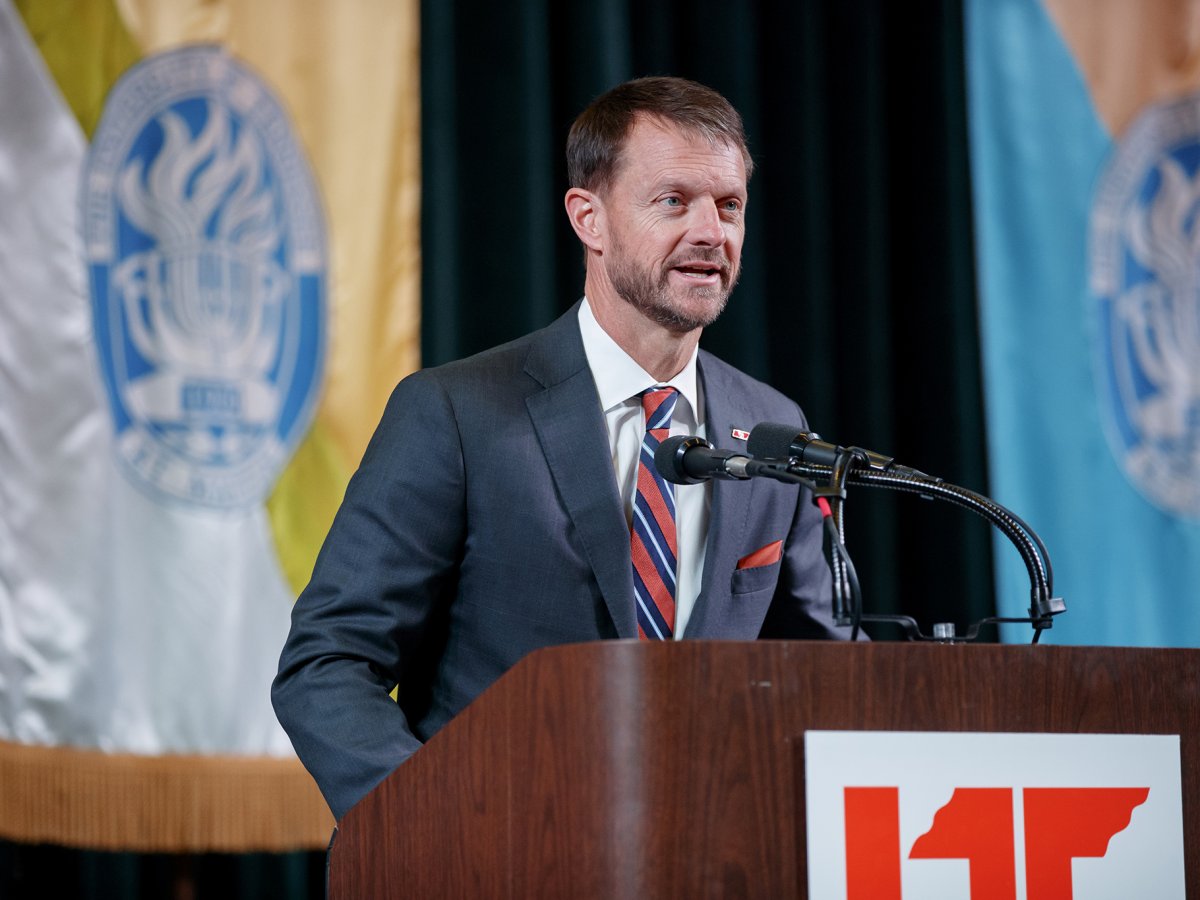 Stuart McWhorter, commissioner of the Tennessee Department of Finance and Administration, delivered the commencement address Dec. 14 at the University of Tennessee at Martin.

Lucian Freeze did not travel far to receive his bachelor’s degree in computer science. The 22-year-old Hornbeak native and Obion County Central High School graduate was one of 348 participants in the University of Tennessee at Martin’s December commencement ceremony held Saturday, Dec. 14, in the Kathleen and Tom Elam Center. Included in that number were 310 who received bachelor’s degrees and 38 who received master’s degrees. Summer and fall graduates were both eligible to participant in the ceremony. Stuart McWhorter, commissioner of the Tennessee Department of Finance and Administration, delivered the commencement address.

“I’ve always been kind of the ‘tech guy’ in my family and my friend group,” Freeze said of his interest in computer science. “So, I decided I could take it a little further and decide how to build the things that I was fixing.”

For now, Freeze will remain at the university as a member of the university’s Information Technology Services staff, where he works with the technology that supports distance-learning classes. Although he enjoys his current position, his future might include work in software development. Whatever lies ahead, he’s grateful for the education UT Martin provided. “I just really like the campus and really like the school, and the professors have been nothing but fantastic here,” he said.

After Lucian and his fellow graduates were seated Saturday, UT Martin Chancellor Keith Carver welcomed the audience and opened with a moment of silence in memory of graduate student Ashley Brooks, of South Fulton, who died late last week in a vehicle accident. She was a 2018 agriculture graduate, a member of the UT Martin rodeo team during her undergraduate years and was currently a graduate assistant coach with the team.

Carver continued and noted that the graduates in the audience came from 63 counties, 24 states and five countries, including the U.S. “To our graduates, good luck to each of you, and rest assured that we wish you the very best,” he said. “Remember that you are soon becoming a part of an alumni group numbering over 48,000 UT Martin graduates around the world.” Following special music by Dr. Roberto Mancusi, associate professor of music, Carver welcomed Stuart McWhorter to the podium.

McWhorter, who was named Tennessee’s finance commissioner in January 2019 by newly elected Gov. Bill Lee, previously served as co-founder and chairman of Clayton Associates and has more than 25 years of experience in entrepreneurship and early-stage investing. His father was the late Clayton McWhorter, a successful businessman and philanthropist, who established UT Martin’s Ned Ray McWherter Institute, a three-year innovation and mentorship program for undergraduate students.

McWhorter’s father-in-law is well-known West Tennessee businessman and entrepreneur Tom Hendrix, of Selmer, who established UT Martin’s Tom E. Hendrix Chair of Excellence in Free Enterprise in the College of Business and Global Affairs. Hendrix, who delivered the UT Martin commencement address in spring 1990, was in the commencement audience along with other family members.

The commissioner offered the graduating class four principles for success instilled in him by his father. He advised graduates to first find a mentor “who can assist you in your professional and personal growth.” He added, “Look for someone to pattern your style after. I’ve been fortunate to have many mentors along life’s journey, and I will give much credit to my success knowing that it would not occur without their interest in me and support of me.”

His second principle is to always be prepared.  “Life often throws us a curve ball,” he said. “You have to be prepared to meet those challenges and embrace the opportunities. I have many stories of life lessons learned from being prepared and more importantly not being prepared. Start with the end in mind: what outcome do you want to achieve, and then begin working back from there.”

McWhorter’s third principle encouraged graduates to assume the attitude of an owner, regardless of the position they hold or the company or organization for which they work.

“If you think of yourself as an owner versus just an employee, you will get to work just a little bit earlier and stay a little later,” he said. “You will see your horizons expand and your fears diminish, and you will think in concepts, not in mechanics. … If you think and act like an owner, your career will flourish, and your life will change.”

His final principle is to simply give back. “All of you here have been blessed in some way. We live in the land of opportunity, but not everyone has the same access to opportunity,” he said, adding, “Don’t wait. Don’t wait until you are settled down or have reached a certain professional or financial goal. The time to give back is now. … Start giving of your time, your love and yourself today.”

McWhorter spoke specifically about each graduate giving back to family, the university and the community in which they live. “No matter what paths you take, you all have a responsibility to be good community-minded citizens, and that means giving something back to the communities in which you live and work,” he said. “For those of you who will become managers, you will soon discover that community relations is both an opportunity and an obligation. As an individual or corporate citizen, if you contribute to important programs in your community, you will create a better community in which you live.”

The commissioner closed by reminding graduates “that life is a process, and living well means continuing to grow and develop through all of its stages.”

“Just when you think you’ve ‘arrived,’ you will find another challenge around the corner,” he said. “You will find that you’re not quite satisfied with the current situation. You will discover there are other goals to strive for, other mountains to climb. We never ‘arrive.’ We just keep traveling down this road called life.” (more)

In his experience, an important part of that journey is defining success. “Success can be measured in many ways,” McWhorter said. “One obvious yardstick is financial. In today’s society, many people equate success with financial achievement. But that’s not the only measure.

“I think a more accurate measure is happiness. Now I know that sounds trite, but achieving fulfillment and happiness is an elusive goal for many. I think the most fortunate people are those who find contentment in both their professional and their personal lives.”

Additional images from the commencement ceremony can be viewed below and on UT Martin’s Photoshelter website. Digital downloads and prints of these images can be purchased from the UT Martin Office of University Relations by calling 731-881-7615 or emailing Nathan Morgan, assistant director of University Relations, at nmorga15@utm.edu for instructions.