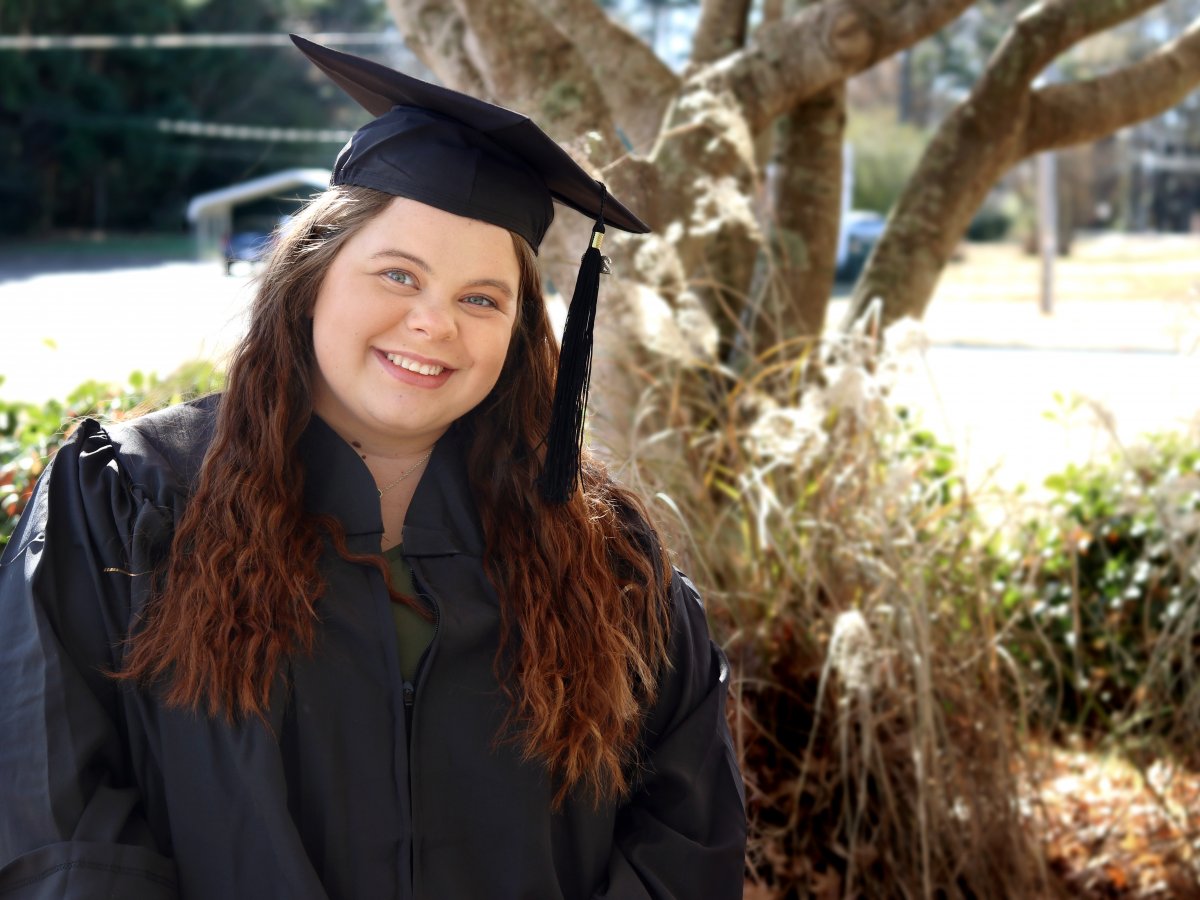 Danielle Ables didn’t consider herself “college material” when she first enrolled for courses at the University of Tennessee at Martin Somerville Center in fall 2016. She overcame self- doubt and multiple challenges to complete her bachelor’s degree one semester early from UT Martin – just in time for the birth of her first child, Averi Jo, on Dec. 10.  Averi Jo’s arrival into the world kept her mother from walking in the commencement line Dec. 14 to receive her degree, but Ables’ story teaches an important life lesson that most anything is possible if you want to succeed.

Ables, 23, was born in Memphis but lived her early years in Mississippi. She completed the ninth grade at Hernando (Miss.) High School but dropped out of school when her mother became ill and needed Ables to care for her. She eventually moved to Somerville, found skilled care for her mother in Bolivar and found a home for herself when she moved in with her aunt. Ables knew that she needed to complete her high school education and discovered Fayette Literary with the help of her aunt. The non-profit organization provides services for adult learners to acquire, improve and apply basic literacy skills, as well as prepare individuals to earn a high school equivalency diploma, which Ables received in 2014.

Danielle continued to care for her mother, who was in a nursing home, while living with her aunt, but her aunt told her that she needed to move ahead with her life and either attend college or find a job. She turned to Somerville Center director Kara Tapp for guidance and applied to UT Martin while also seeking employment at FedEx. “So, I got a job at FedEx and I actually got a call from Kara saying that I was accepted into Martin the exact same day (in August 2016),” she said.

Ables recalled that the decision at that time to pursue a college degree was a huge leap of faith. “I mean it was one of those things where I honestly didn’t think that I was cut out for college, like I didn’t think that my education or (I) could persevere through college at the time,” she said. “So that’s one reason why I didn’t go (to college) for so long. I mean it was a two-year gap, and after talking with Kara and understanding I do have options, I can do this, is when college became more of what I wanted to do.”

Her original goal was to pursue a health-care career, either working with people or animals. Tapp again stepped in to advise her, this time, on a possible major, and she suggested Ables enroll in an introductory agriculture class. This initial class quickly redirected her interest to pursuing an agricultural business degree with a concentration in farm and ranch management. Ables proceeded to load her schedule with classes, studying and work. However, the combination of full-time academics and Federal Work Study hours during the day and overnight package-handling duties at FedEx caused her to step away from FedEx after about a year so she could focus on school.

Another significant opportunity happened for Ables in spring 2019 when she applied for an internship position at the West Tennessee AgResearch and Education Center under Dr. Avat Shekoofa, a crop physiologist who studies water stress and irrigation management and the effects of water deficit stress on various row crops. Ables received the internship and began assisting Shekoofa with drought research, which is conducted under hot and demanding conditions but is the kind of challenge that Ables readily embraced.  “We do a lot of experiments and data collection. … It’s very interesting,” Ables said.

Not only has Ables enjoyed the research work in Jackson, but other potential opportunities have emerged to make the experience even more valuable. “I’m hoping it (the internship) leads to a full-time position there. If not a full-time position, I am planning on staying there after graduation, because I would like to get my master’s, and I feel like being at the research center (and) working there, I have more of (the) resources to be able to complete a master’s. I would have Dr. Shekoofa’s help,” she said. Whatever happens next, Ables has contributed in a meaningful way to the WTREC’s research and has left a positive impression. “Danielle is a well-organized and hard-working person,” Shekoofa wrote in an email. “She is reliable. My team and I (at the center) are glad that she joined our research team in 2019. We are looking forward to working with her in 2020 as well.”

Spring semester 2019 also brought an opportunity for international travel when Ables participated in a nine-day travel-study to Italy, thanks to the support of an anonymous donor from the Somerville area. The trip, which included stops in both Rome and Tuscania, allowed Ables and her fellow students to gain first-hand knowledge of how Italian agricultural practices differ from those in America and bring back ideas they could use in their future careers. The trip made her the first student from the Somerville Center to participate in a travel-study or study-abroad opportunity.

Amid the positive things during her college journey, Ables also encountered several significant roadblocks along the path to her degree. Interestingly, the academic major she picked might have created the most serious doubts in her mind about her ability to succeed in college. “I have to say my biggest challenge would be picking a major that I have no experience in,” she said. “I picked agriculture with no ag background. So, I don’t have any family members who are farmers, who have any lands, who have anything like that,” she said, adding, “And that’s one reason why working at the (Jackson) research center has helped me out a lot, because when I applied there I had no experience.”

“Danielle’s success is an inspiration to all of us,” Tapp wrote in an email. “She faced many obstacles to earning a college degree, and she refused to give up when the going got tough. I’m so proud of what she’s accomplished and, more importantly, the kind of person she is as Danielle begins the next chapter in her life.”

Now that her infant daughter is part of story, Ables can someday share her life lessons and suggest how she, too, can succeed in college.  “I would definitely tell her that college isn’t easy, but it is necessary, and that she’ll be able to do anything she can put her mind to, because I definitely did,” Ables said. “I was able to complete something that I never in a million years thought I could do. And I never gave myself the credit or the meaning to be able to do this, and as long as she keeps (moving) ahead and puts her mind to anything, she will be able to accomplish anything.”

A December 2016 photo of Ables, two of her friends – Elizabeth Burns and Courtney Wilburn – and UT Martin Chancellor Emeritus Bob Smith, a key figure in the creation of the Somerville Center, was taken at a reception following the official ground-breaking event for the facility, which opened in fall 2017. The photo marks a significant beginning for the three friends, who all received their degrees December 14, as well as the beginning of a higher education destination for future generations. As it did for Danielle Ables, the center will provide opportunities for others to learn that they, too, are “college material” as they take the first steps toward a bachelor’s degree and a better future.