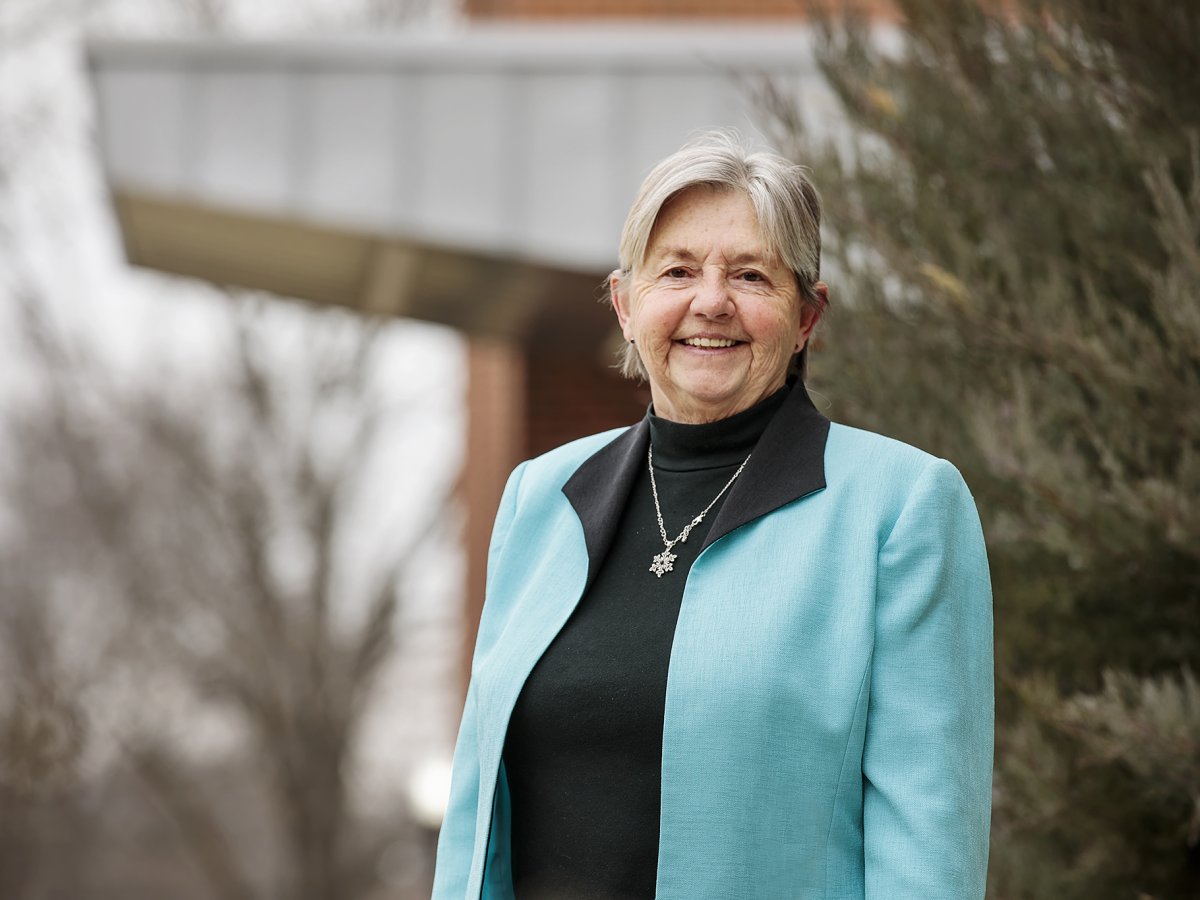 Donna Flagg-Brown, a non-traditional student at the University of Tennessee at Martin, is pictured in front of the university’s Fine Arts Building, where she currently takes an enameling course.

Donna Flagg-Brown is not a typical college student. Not only does she hold five university degrees and several passports full of world travel stamps, at age 69, she is back in school to learn something new.

“I’m at the point in my life where every two years I go back to school and take a course. I have degrees, but I don’t do it for the degrees. I do it for the knowledge. So, I try to do something that’s totally out of my comfort zone,” she said. “Two years ago, I took sign language. Two years before that, I took Chinese. So, this time I said, ‘Ok, time to get away from the languages.’ I’ve taken medical courses and legal courses, and so now I’m taking some art courses.”

Flagg-Brown is auditing a class on enameling at the University of Tennessee at Martin after starting with a course on jewelry making last fall. She actually already has experience in this area after making jewelry extensively in the ‘60s, but for her, it’s all about discovering new processes. In fact, she has even shown her professor a new technique or two along the way.

However, Flagg-Brown isn’t a jewelry-maker by trade. In fact, she has worked in many different trades, including the tourism, legal and newspaper industries.

“For most of my work life, I was a tour director doing youth groups, bands, drama clubs and things like that. … I’ve been all over Canada and the U.S. with the youth groups, and I’ve worked for seven different companies – some from the U.S., some from the U.K. and Canada – doing adult tours: bus tours, train tours, multimodal, cruises, whatever,” she said. She has not only covered all of North America, but has also visited England, Ireland, Scotland, Wales,

France, Venezuela, Cuba, China and some stops in Africa, among others. Her specialty with one particular travel company was a train tour of Canada: coast to coast.

“These people would all fly into Quebec City, all different airlines from all over the world. … We met and we would have a welcome dinner, and I would give them information. Then the next day we would head out, and that particular trip was a train tour. So, we would go from Quebec City all the way across to Victoria. We got off (the train) in Vancouver and took the ferry over to Victoria, and then they all flew back home, and I did it in reverse with another group. So that was a pretty typical thing for me,” she said. “One year I started with a new company that kept me pretty busy, and that was the youth tours. I actually was on the road 207 days without a day off.”

After years of extensive travel, Flagg-Brown decided it was time to discover something new. So, she returned to school.

“My main interest was that I wanted to get involved with the school newspaper. So, I went to a community college and took journalism and became the editor-in-chief of the school newspaper and did that for two years. Then I thought, ‘Ok, that’s interesting. I know how that all works now,’” she said. But travel was ultimately her passion, so she returned to the tour circuit.

Being a successful tour director requires more than a knowledge of stops along the route, however. Flagg-Brown says her work involved extensive research into the culture, customs and daily habits of the people in each country she visited.

“There are a lot of countries where, if I am leading a group in that country, I need to know how to say, ‘We don’t speak your language fluently, so please repeat slowly, in English if possible.’ I try to learn that phrase. And then the little quirks about countries,” she said. “In this country, we have the habit of saying ‘good job!’ (using the ‘thumbs up’ gesture). Well, in other countries it’s not such a good gesture, and you may get into big trouble. Or if you’re having a drink at the bar and you turn your glass upside down, like a lot of guys will do when they are done, that means you’re looking for a fight. It’s just simple little things, but if I don’t know it to pass on to my passengers and my clients, it’s going to bite me in the butt because what happens to them, I am responsible for.”

“It’s lots of research, which brought me to another time (when) I went back to school and decided I would become a researcher in legal things,” she said. “It’s a thing with me, the what-ifs and the why. So, research was a good area for me to ponder around in.”

“My philosophy about education is that there’s always something new to learn. You’re never too old to learn it, and if you pass up an opportunity, sorry for your luck,” she said. “When I came here (to Martin), and I started looking (at UT Martin), and I realized that they have the 65-and-over deal where I can audit a class, I’m like, ‘Wow! Why are there not lines of people over 65 at the door?’ I don’t understand that. … People will say ‘I’ve always wanted to do this’ or ‘I’ve always wanted to learn that,’ and when you have the opportunity to audit a class at no charge, would you say ‘Oh, I don’t know,’ or would you say ‘Absolutely’?”

With so much experience both inside and outside of a classroom, Flagg-Brown says the knowledge you gain from one truly impacts the other.

“The classroom experience gives you the basics and prepares you for real life, because it’s never going to be as you were taught, but it allows you to work with it, whatever it may be,” she said, remembering the start of her tour guide career. Her midterm at the International Tour Management Institute required her to present a 15-minute introduction for a tour in a randomly selected country, and she learned the basic facts to share with a standard group. However, not all groups are standard, and thinking on her feet became a vital skill.

“My first tour was a group from the U.K. … and it was a Canadian tour. They all came in together, and that first night I always do a cocktail party or something to introduce myself and let them ask their questions. … I found out at that time that every one of them were retired professors, so no pressure there,” she said. “But I said, ‘I’m prepared for this. They’re people on vacation. I’m prepared for this.’ So that’s the difference between what you’re learning and how you use it.”

As for her future plans, Flagg-Brown doesn’t have a particular direction to travel from this point forward.

“I don’t think I’m that kind of personality. … I think the plans that I’ve made in my life have come to fruition,” she said. “That sounds like there isn’t any plan at all, but I think my journey in life is to fill it with as many different things, different people, as much knowledge as I can cram in there. I’ve got a long way to go yet. I’m 69, and I don’t say that very often because it’s only a number to me.”

Her next class choice, however, is an easy one: “Maybe I’ll take travel and tourism!”