John, Paul, George and Ringo have discreetly lived on the campus of the University of Tennessee at Martin without drawing much attention from the public through the devoted care of Hannah Trimble, a senior criminal justice major with a focus in forensics science from Greenfield, and Dr. Jack Grubaugh, professor of biological sciences. While these cleverly named beetles aren’t the beloved English rock band of the 60s, the four colonies of Dermestid beetles, or flesh-eating beetles as Trimble prefers to call them, housed at the UT Martin teaching farm, have “come together” as the subject in a University Scholars forensics research project.

The Dermestid beetles, or Dermestes maculatus, only feed on decomposing organisms and animal products, and are currently being used to test the accuracy of the post-mortem interval —the method used to determine the time of death — in a study conducted by Trimble with the guidance of Grubaugh. Scientists believe the beetles appear two weeks post-mortem, preferring the dried flesh of the body, while Trimble and Grubaugh believe they appear earlier.

As a member of the University Scholars Program, Trimble is required to complete a two-year academic research project related to her studies at UT Martin and has chosen the creepy-crawlies to defend her designation as a University Scholar when she graduates. 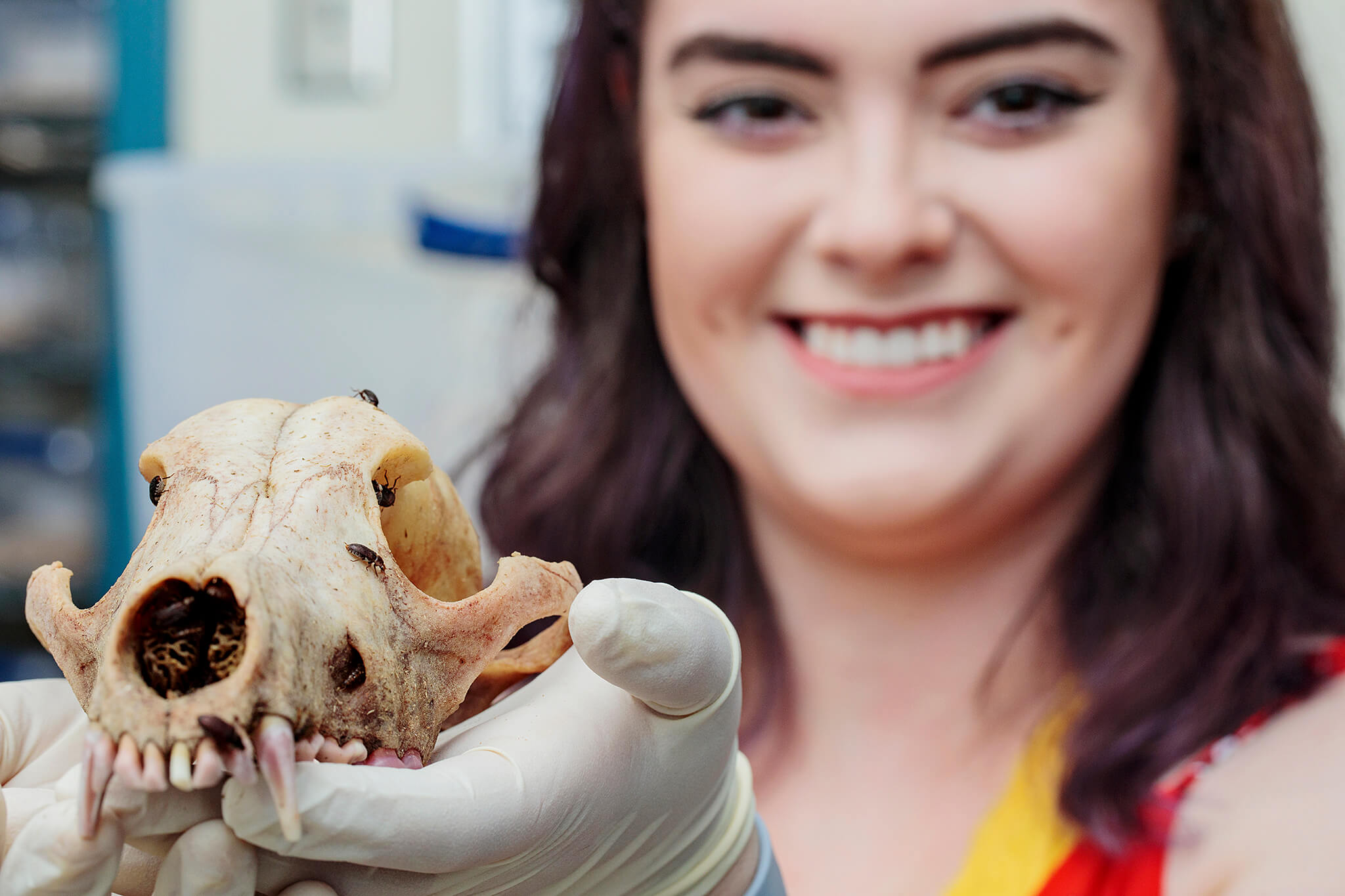 By using animal skeletons, Trimble and Grubaugh are testing their hypothesis that the beetles actually prefer fresh meat over dry meat and determining how soon the beetles are attracted to an organism after death if other insects are not present in the environment.

“Many people believe that Dermestes maculatus prefer rough, dried carrion as opposed to fresh, but from dealing with the beetles, we know that they will definitely eat fresh meat. We believe that the beetles may prefer fresh carrion and are just out-competed by blowflies and other insects that make it to the bodies first. If what we believe is true, it could be very important in forensic science and determining (post-mortem interval),” Trimble said.

According to Grubaugh, the research opportunity Trimble is benefitting from is unique to UT Martin and cannot be found in other undergraduate programs.

“It’s one of the things that we do here, we put an emphasis on research, and that makes us different from a lot of other small schools. We really want to see students do research because it just adds that much to their whole personality. …It’s rare to find someone that is doing research without undergrads in our program.”

As the beetles clean the animal skeletons, not only are they contributing to Trimble’s project, they are also preparing teaching specimens for animal science laboratories at UT Martin. One class is currently using the beetles to clean a horse carcass for students to identify and rebuild the skeleton.

Trimble’s project has also spread into the community as local hunters have contributed animals to be eaten. Tate Family Food grocery store in Greenfield has donated out-of-date pork to sustain the beetles’ appetites between experiments.

“We really owe them big time for that, so we thank the community that (is) involved as well,” said Grubaugh.

The beetles have been used to clean the skeletons of a variety of animals including most notably a camel, a llama, a kangaroo, otters, as well as deer, coyotes, cows and other native mammals of Tennessee.

“My favorite part of this research so far has been just getting in there and doing everything. Before this project, I had never done actual research, so I love being able to collect my own data and watch as everything comes together,” said Trimble. “Also, the beetles are fun to watch as they clean skulls, until they hide the bones, then they’re just jerks.”

The experiment will eventually involve 40 condensed colonies of beetles; however, for the preliminary trials, the pair have amassed four large colonies of hundreds of thousands of beetles to set parameters for the project. The official study will begin once the weather gets warmer.

While the timeline of the experiment depends on many variables, Trimble and Grubaugh plan to publish their research once enough data has been collected and the results are compiled. Trimble will use her research paper to defend her project in front of the Honors Council next spring in order to graduate as a University Scholar.

The University Scholars Program promotes individual integrity, academic achievement, and education that develops intellectual, moral and social responsibility among its students, according to its mission statement. For more information about the University Scholars program, visit utm.edu/honors/scholars or contact Dr. John Glass, director, at jglass@utm.edu.