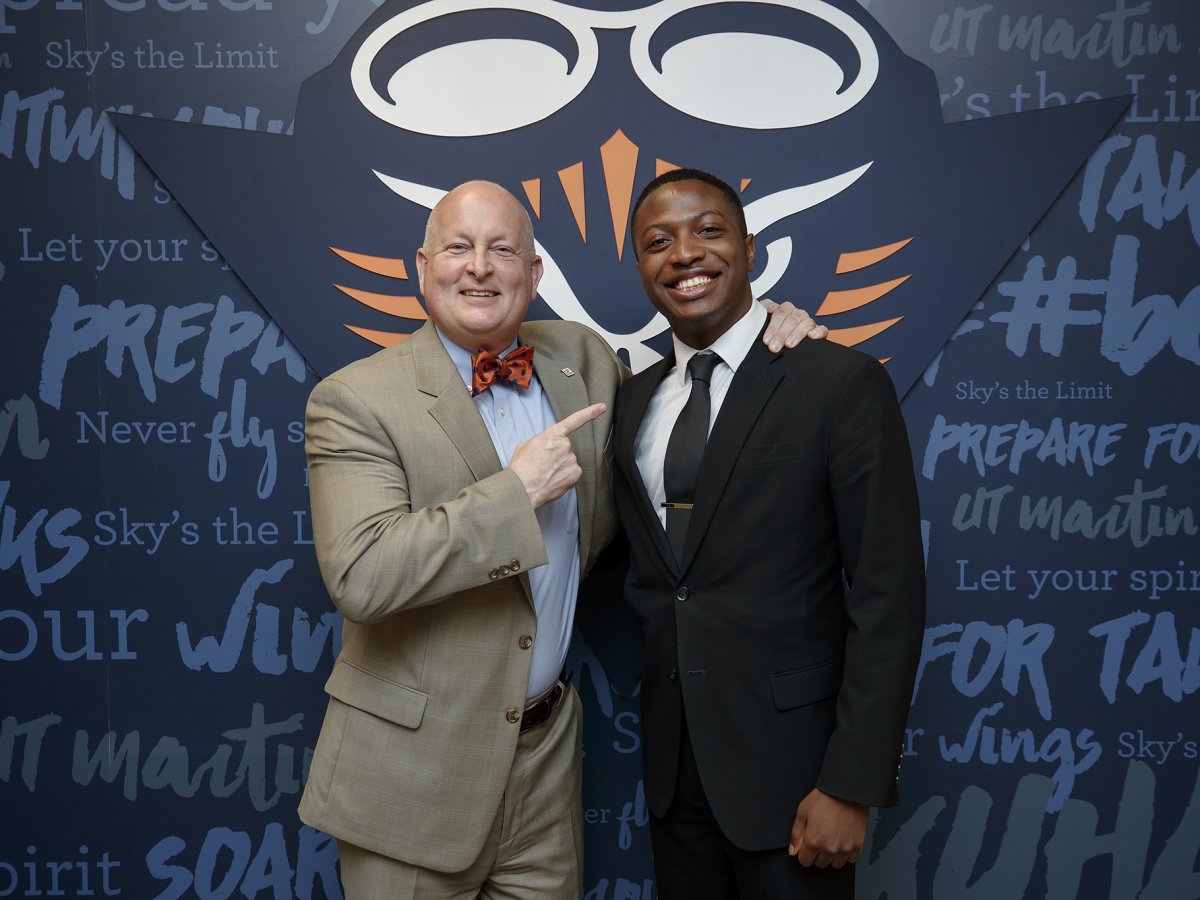 One lesson University of Tennessee at Martin political science graduate Devin Majors learned early in his experience at college is that in order to fully become his own person, he had to be willing to try new opportunities.

When Majors first arrived at UT Martin from Nashville in 2016 as a freshman, he knew he wanted to graduate and attend law school, but never thought the journey to achieving those goals would include such unique experiences while expanding his comfort zone.

“You can make a plan in life, … but I’ve learned during my time at UT Martin that you’ve got to be open-minded of where you’re going to end up,” said Majors. “I never expected, being from the city, to go to a rodeo; I never expected to go to a rope-pull. I had no idea what any of those things were, but by being open-minded and having that ‘yeah, I’ll try it’ mindset, I have seen so many different types of stuff here at this school.”

In his time at UT Martin, Majors became the fifth African-American student to serve as SGA president and was elected for two terms, joined Alpha Phi Alpha Fraternity Inc., served on the UT Martin Advisory Board as the student representative, earned internships with the Bank of America Student Leaders Program and the Metro Nashville Public Defenders Office, and was involved with the Black Student Association and Multicultural Activities Council.

While there were times Majors believes he was overinvolved in organizations on campus, his senior year in-person classes being cut short because of the coronavirus outbreak makes him thankful for the opportunities he capitalized on while still on campus.

Like many others, Majors was disappointed that his senior year ended without his being able to experience many of the traditional events hosted by UT Martin, like the senior walk and commencement, but is proud to be recognized with the graduating class of 2020 who overcame the challenges and uncertainty this semester brought.

“To be honest, it’s sad,” said Majors. “All of those (events) have either been taken away completely or postponed, so it is a bummer for myself and anybody who’s graduating this spring. In the grand scale of things, this just shows the world what the class of 2020 is capable of. That’s the sunshine in all of the darkness. It may seem like everything has gone wrong, but it really shows you don’t know how strong you are until you are put in a situation where you have to overcome a difficulty.”

Majors represented the spring graduating class of 2020 at the UT Martin virtual commencement by sharing his final words with his classmates whom he feels he has grown closer to during his time in college.

“It almost brings me to tears, it’s such a huge honor,” said Majors about his role in the commencement ceremony. “It is a huge honor because as a member of the class of 2020, … we’ve been on this huge journey together… I’ve shared so many memories with them, and it allows me to get that final moment with the student body, even though it is virtual.”

“I think they should recognize the whole class of 2020 as some people who could really take what life threw at them and make something out of it.”

In his parting words to his fellow classmates, Majors reminded the graduates to “Continue to dream, remain youthful and soar like a Skyhawk.”

Majors will be attending the University of Tennessee College of Law in the fall to study Civil Rights law to fight for the underprivileged and underrepresented. Majors said it was important to him to stay in the UT System for law school because of his experiences these past four years at UT Martin.

When asked in a previous interview what advice he has for new students, Majors said, “Don’t let your comfort be your downfall. It can be very scary to go try something new or join a new organization or take on a leadership position or get a title, but … if you’re comfortable, you’re not growing.”

As he continues in life, wherever it may lead him, Majors plans to take the lessons he learned and experiences from UT Martin with him as a reminder to always be open to new opportunities.