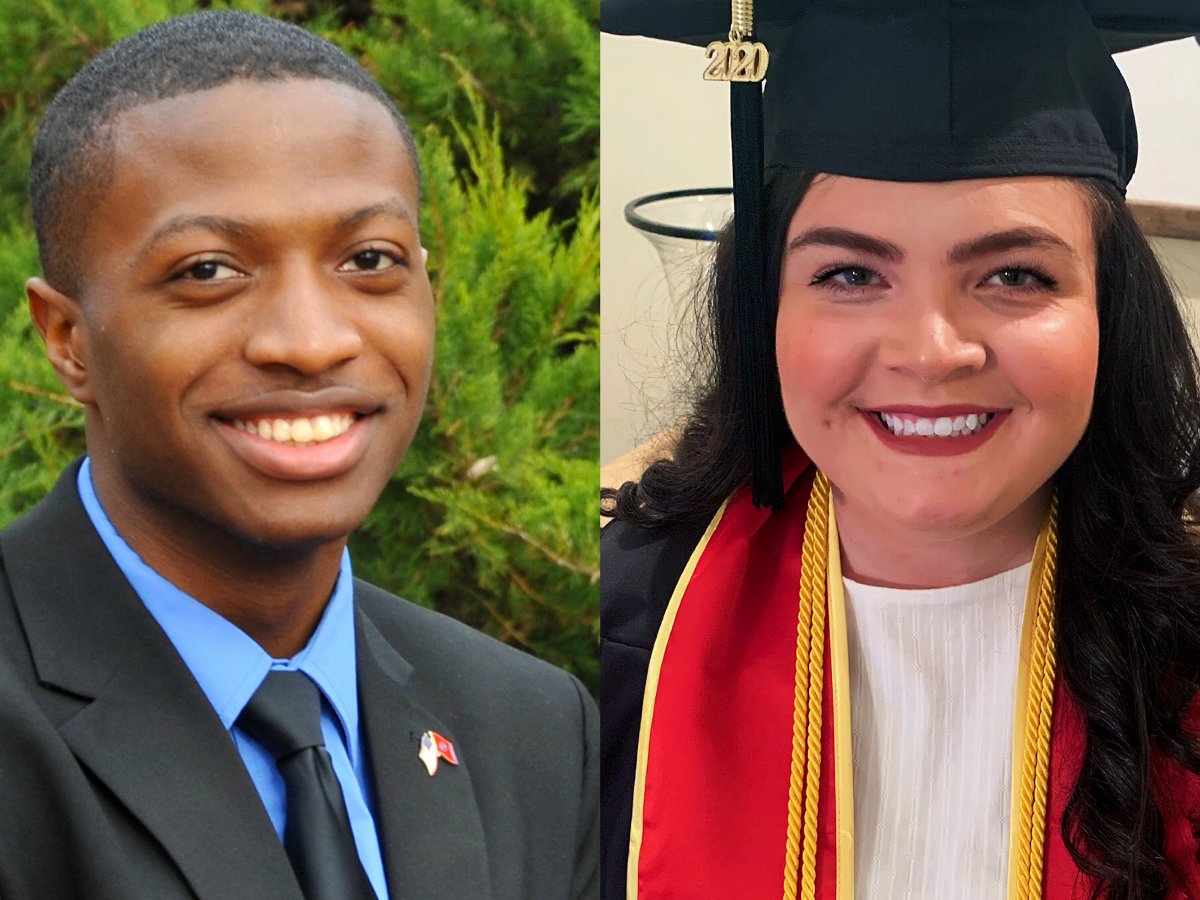 Savannah Williams, of Newbern, and Devin Majors, of Nashville, were each recognized as the recipients of the Paul and Martha Meek Leadership Awards during the University of Tennessee at Martin’s virtual commencement Saturday, May 2. These awards showcase outstanding community and campus service by graduating students and are the only awards given during commencement each semester.

Williams, an education graduate, served in many capacities as a member of Chi Omega Xi Zeta in the College Panhellenic Council as the vice president of Judicial and Education. In these roles, she organized and maintained standing rules to ensure the safety of and benefit sorority women on campus, a recruitment counselor, and even hosted two women’s self-defense classes during Panhellenic Pride Week and Women’s Health Week. In addition to her sorority service, Williams worked as a resident assistant for two years before being promoted to student assistant for Residence Life. She was also the 2018 recipient of the University Service Award.

“As an education major, Savannah has consistently been in placements that required her to go into local schools. While in the schools, she was able to find ways that allowed her to give back. … Her presence in local schools has allowed her to give back to the Weakley County community regularly,” Ryan Martin, assistant director of Housing, said in Williams’ nomination material. “Because of her varied service and academic excellence, I truly believe that Savannah Williams meets all of the criteria for this award and would make an outstanding candidate for the Paul and Martha Meek Leadership Award.”

Majors, a political science graduate, served as the president of the Student Government Association for two terms in which he led the 60 student-members of SGA and oversaw five standing committees; executive vice president of the Black Student Association; vice president and Northwest Area assistant director of Alpha Phi Alpha Inc. Fraternity; first student on the inaugural UT Martin Advisory Board and was a founding member of the Multicultural Activities Council. He is also the recipient of the 2019 Student Leader of the Year award.

“Devin has been a strong student leader that has spoken for those that have not spoken for themselves. He has faced adversity at many turns yet kept working to make a difference. I admire his resilience more than anything else,” wrote John Abel in Majors’ nomination material.

“It is without a doubt that Devin Majors has left an impact on this campus,” Anthony Prewitt wrote in Majors’ nomination. “Most times he put the students first and has always been someone who I have admired.”

Dr. Paul Meek served the UT Martin campus as executive officer, dean, UT vice president or chancellor from 1934 to 1967. This award was originally established and funded by the three Meek children to honor their parents.