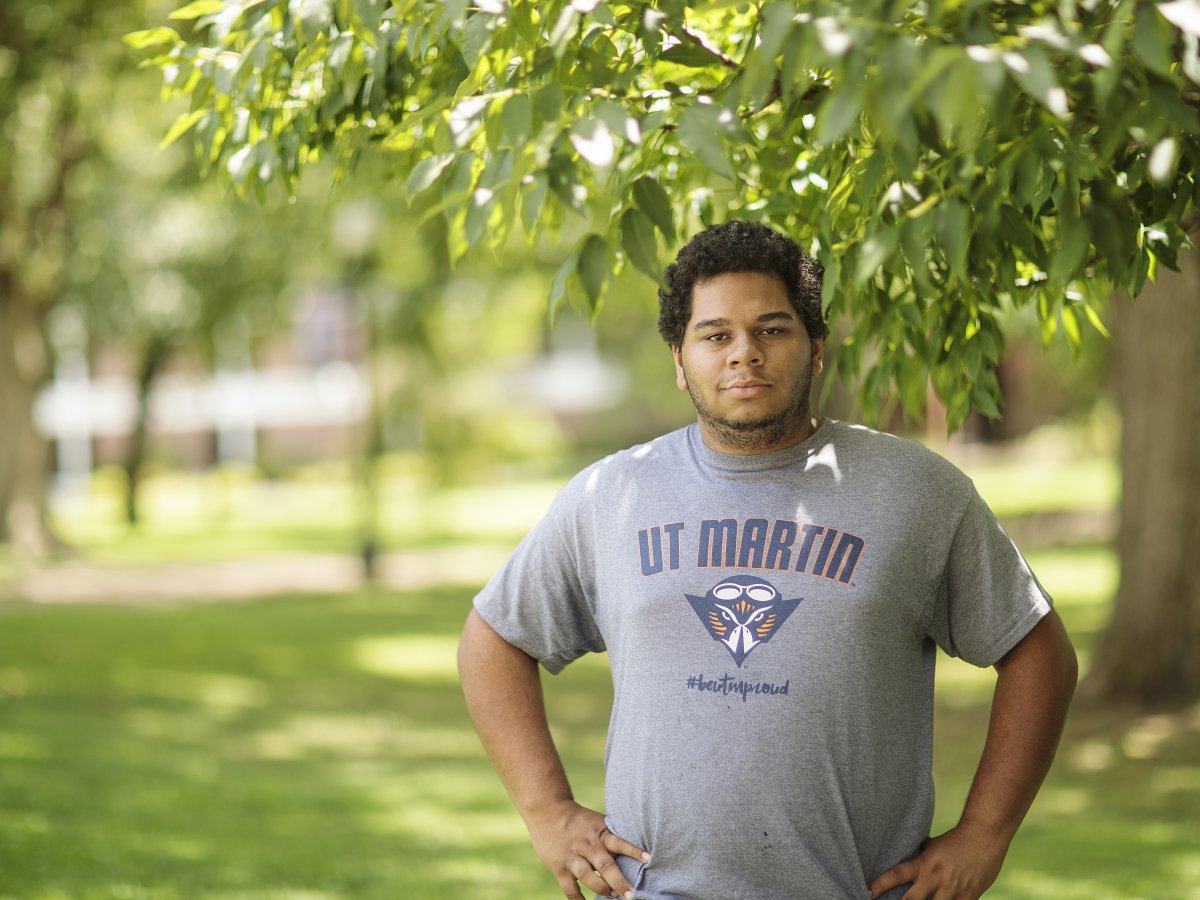 Justyn Johnson is a sophomore secondary education major from Union City. His participation in the Call Me MiSTER program has afforded him many experiences at UT Martin that he otherwise would not have received.

“You have to make sure you have the experience; don’t let the experience have you.” Through the University of Tennessee at Martin Call Me MiSTER program, Justyn Johnson has done just that: made the most of every situation he’s experienced while in college.

The Call Me MiSTER program, originally founded at Clemson University in 2000, is a leadership program that seeks to provide future teachers from diverse backgrounds with the tools and support needed to pursue successful careers in elementary and middle schools across the nation. “MiSTER” stands for “Mentors Instructing Students Toward Effective Role Models,” and the program’s goal is to provide under-served, socioeconomically disadvantaged and educationally at-risk communities with minority educators.

Johnson, a sophomore secondary education major from Union City, applied to the Call Me MiSTER program in his senior year of high school with the hopes of becoming a history teacher in West Tennessee. As an African American man, Johnson grew up without seeing minority male representation in the education system and wanted to help change that for future generations of students.

“(The Call Me MiSTER program) is something that represents a lot more than just being male minority teachers. I think it is helping because … some people go their entire school careers without ever having a minority teacher,” Johnson said. “For me, I hope that one day when I teach a kid that is like me, that might be mixed or might not come from a good home life, they can look at me and be like, ‘Well, he is like me, and he is successful. He is thriving in his life, so, why can’t I?’”

“The potential this program has in molding and shaping the students, not only students of color in K-12 but students in general by having … that minority male in the classroom in their presence in schools, is very powerful,” Ferrell said.

Johnson credits two of his teachers from high school for inspiring him to become a teacher and says he wants to become the positive influence in his students’ lives that they were to him. Having teachers who supported not only his educational growth, but also his personal well-being showed him the impact he could one day have on his students.

“(I want to let my students) know that even though I’m their teacher, I can also be there to talk to them if they feel like they don’t have anyone else to talk to.”

Johnson says he is currently receiving the mentorship and support he hopes to give back to his students in his classroom through the Call Me MiSTER program.

“It has made a big difference because I know that UT Martin, in general, has a great support system, but, especially being an African American or a mixed man, having other strong, powerful Black men to support us like Anthony Prewitt (assistant director of multicultural affairs), Samuel Tharpe (administrative coordinator of the Call Me MiSTER program) and Austin Ferrell means a lot to me,” said Johnson. “They’re an example of what I can get to as long as I stay on the right path.”

He says being in the Call Me MiSTER program has afforded him opportunities he wouldn’t have had the chance to experience if he hadn’t been a part of the program, like living on campus and being involved in student organizations like SOAR (Summer Orientation and Registration) staff and Sigma Phi Epsilon.

“Those are aspects of my life I’ve enjoyed being a part of that I never thought I would be a part of. It was an interesting plot twist, but one I’ve enjoyed.”

While only in his second year as a MiSTER, Johnson has already had the opportunity to serve in the West Tennessee community and see his impact first-hand. Through a mentorship partnership with minority students at Fulton Independent School District, granting scholarships to teachers in West Tennessee for their classrooms and working with the Rotary Club of Martin, Johnson has already accrued experiences he says will help him as a teacher.

As Johnson continues his education at UT Martin, Ferrell is excited to see his personal growth in life and the program.

“I want Justyn to continue being an effective leader for UTM,” said Ferrell. “I want him to continue to push and to eventually be a great role model teacher for other people to look up to, not only people in the Call Me MiSTER program but people in the community, his students, his family and so on.”

When asked what advice he had for other students, Johnson said, “You have to make sure you have the experience; don’t let the experience have you. So, if something is going wrong in your life, don’t let that define who you are. Take that experience, make it a part of you and grow from it,” just as he has.

For more information about the Call Me MiSTER program, contact Ferrell at aferre10@utm.edu.