“James R. Vinson, Box 98 Sharon Tenn., 5-27-57, Bricklayer,” reads the tile in red ink. For 63 years, this tile laid in a bathroom in Clement Hall on the University of Tennessee at Martin campus unbeknownst to all but the bricklayer who signed it, James R. Vinson.

However, after recent infrastructure renovations to Clement Hall, Vinson’s signature was recovered from the construction debris, bringing light to the now 90-year-old Union City resident and the legacy he literally built at UT Martin. 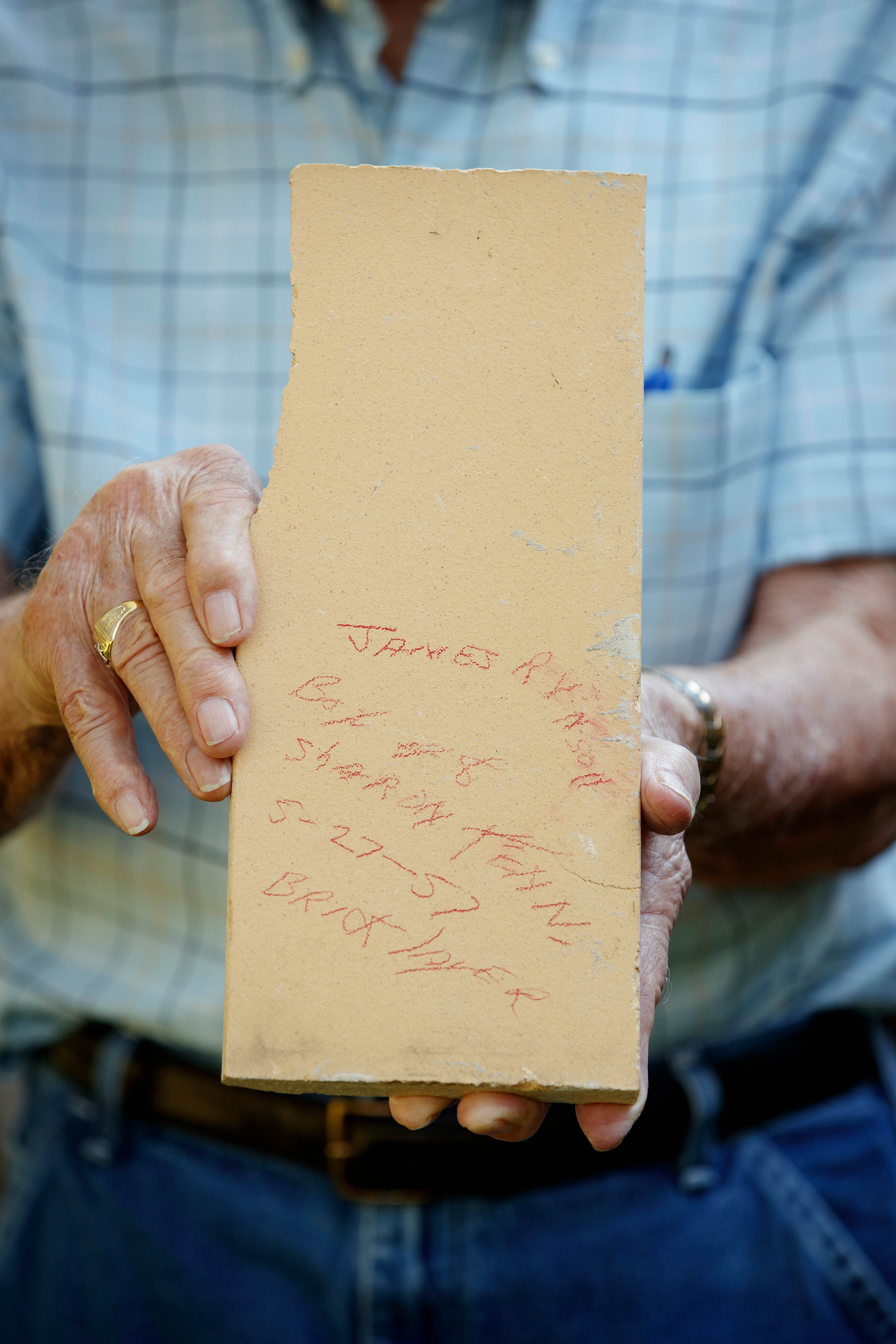 Vinson began working at UT Martin as a bricklayer in 1957 when he was 27 years old with his father who taught him the trade. With Clement Hall as his first project, Vinson was later contracted to help build and repair at least seven buildings on campus including the Paul Meek Library, the Student Recreation Center, multiple residence halls as well as the Hall-Moody Administration Building brick sign.

“I was just responsible for laying the brick and tile,” said Vinson. “I wasn’t the boss or nothing, I was just a hired hand doing my job. What they told me to do, I’d do it.”

Even if Vinson had never done what they asked him to do before, he said he’d try to do it to the best of his abilities, and if the lead contractor didn’t approve of it, he’d tear it down and try again.

After finding the tile, Kent Cook, the superintendent for Barger Construction, the company responsible for the renovations to Clement Hall, contacted Dana Hagan, project coordinator for the Physical Plant, to let her know he found something she should see. Much to Hagan’s surprise, when Cook handed her the tile, she quickly recognized the name as a man she had gone to church with for 40 years.

“My heart just immediately started pounding and my eyes welled up, and I was just like, ‘What in the world? I know him!” said Hagan. “What are the chances? This is a miracle.”

Vinson said he never expected to see the tile he laid so many years ago again, and when Hagan returned the tile to him, he couldn’t help but tear up and hug her.

“I was shocked,” Vinson said when asked how he reacted to Hagan giving him the tile. “I didn’t realize I’d ever see it again.”

Hagan says the whole experience has been “overwhelming” as the renovations in Clement Hall are only happening in specific locations and “the chances of us cutting out the thing that held that (tile) … is truly a miracle.”

Vinson currently has the tile on display in his home above his brick fireplace as a reminder of the life he built for himself through hard work. 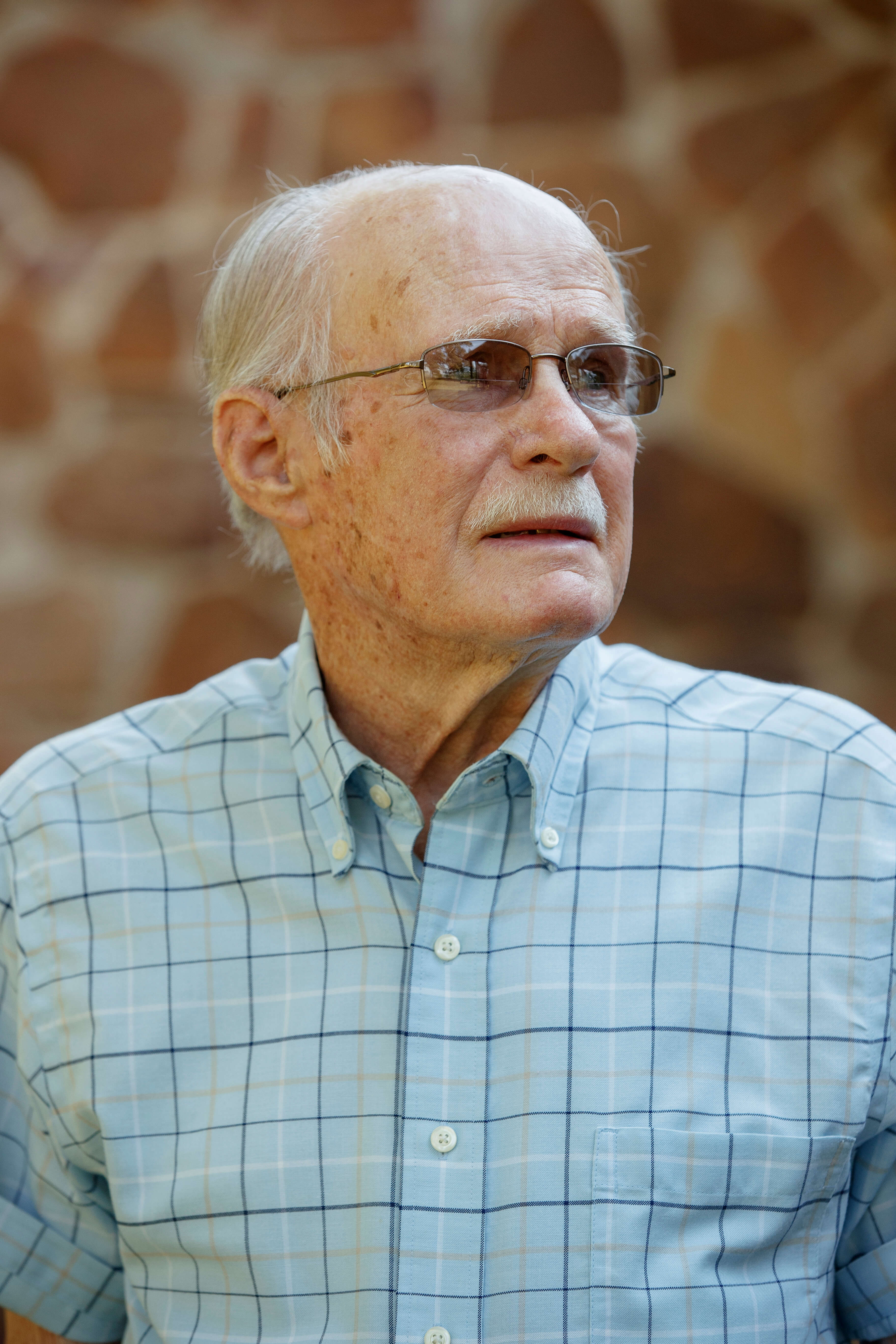 Vinson grew up in the 1930s in a house near the Heating Plant on campus. He saw UT Martin grow from the wheat fields he and his brother used to play in to the university that would teach his children and grandchildren.

Vinson’s bricklaying legacy is best exhibited in the Hall-Moody Administration Building front sign, which he helped build in his 60s. His family loves to remind him of his work at UT Martin every time they drive by the university sign.

While Vinson enjoyed working at UT Martin and the surrounding area, he and his wife of 40 years, Glenda, often found themselves traveling across the country with a bricklaying team to build churches.

Just when the Vinsons and Hagan didn’t think the chances of finding the tile could get any more unbelievable, one church in West Tennessee Vinson helped rebuild happened to be Cook’s home church that burned down, which they discovered after meeting.

“That’s the best part of it to me,” said Cook regarding his church. “It’s pretty interesting to meet someone who built a building 62 years ago. … I was surprised he was still living and that anyone knew who he was.”

Overall, they have traveled to 37 different states as well as the Philippines, St. Thomas, Puerto Rico, Colombia and Brazil to brick churches.

“It’s been an adventure,” said Vinson. “I’ve enjoyed every bit of the work I’ve done (at UT Martin) and around.”