He sat relaxed in his recliner with his 163rd Combat Engineers Battalion jacket laid on his lap, surrounded by worn photos from his service in France, Germany and Austria and transported the room back in time to 1943.

“We were combat engineers,” T. Joe Walker said. “We went into France and built bridges and (were) there on until the end of the war. I was in charge of Company B of the 163rd Combat Engineers. We built wooden bridges, pontoon bridges, treadway bridges, just about every kind of bridge you could think of.”

The 96-year-old Martin native, along with three of his brothers, served in the Army and Air Force during World War II. Walker, a T/4, or technician fourth grade, by the end of 1946, was just thankful he made it home from the war alive and in time to marry the girl who wrote him letters.

“Camp Van Dorn… Sorriest place there ever was,” Walker said. “Ah, but it turned out to be alright.”

Soon after, Walker and the 163rd were on their way to Europe. After preparing for combat at a station in England, the battalion landed on Utah Beach on June 21, 1944, just mere weeks after D-Day. They quickly assumed their responsibilities and began combat support. The 163rd was in charge of clearing roads for troops, building bridges, trucking supplies and occasionally acting as infantry when the situation called for it. They carried what supplies they needed and relied on the land for many of their operations.

“I don’t remember how many bridges we built, but it was a bunch of them,” Walker said.

The 163rd traveled from Normandy, France, to Linz, Austria, building bridges to transport troops, vehicles, munitions and supplies across Europe. Overall, the 163rd built 42 bridges totaling in 4,844 linear feet. A model of one of the bridges Company B built was donated by Walker to Discovery Park of America in Union City and is currently on display.

One of Walker’s most memorable experiences began while operating at a gravel pit near General George Patton’s headquarters. During the invasion of France, the 163rd served with the 1st Army, but as they moved inland, the 163rd transferred to General Patton’s 3rd Army. While crushing rocks, a Jeep carrying Patton arrived, and seeing the three-star emblem on the jeep, everyone except for a corporal stopped working and saluted. General Patton noticed the corporal and approached him asking if he knew who he was.

“No,” the corporal said.

“He said, ‘I’m glad to meet you, I’m Andy,’ and stuck his hand out to shake Patton’s. He got chewed out,” Walker said through laughter. The corporal was thrown in the guard quarters for the night and never forgot who General Patton was.

Even though Walker worked as an engineer, they often operated under enemy attacks.

“I went up to the front lines once; I didn’t care for that much,” Walker said. “It came close a lot of times… I was one of the lucky ones.”

Walker’s three brothers Harvey, Herald and Bert, served alongside him during the war, but unfortunately, Harvey wasn’t as lucky. After Harvey was killed in action, all four brothers returned home to bury him together.

When Walker returned home from the war in January of 1946, he waited only three days before getting married, twice. He and his soon-to-be bride Verna had only met once before Walker left for the war, but their love for each other grew through the letters they wrote, becoming a source of light in a dark time.

“Yeah, we wrote a lot of letters…” Walker said smiling.

At Christmas, Walker wrote Verna and asked her to wait for him to get home before she left Martin to return to Chicago to work at a munitions plant. When he arrived home the next month, the couple was married at their preacher’s house in Gibson County.

However, Walker and Verna had received their marriage license in Weakley County and were legally required to get married in the same county they received their license from. After noticing the discrepancy, the preacher rushed to their parent’s house in Weakley County to remarry them, creating their iconic story that has been shared with the many generations their family has grown to be.

The couple was married for 69 years before Verna passed away in 2015. Now, Walker remembers her light through the letters, photos and a lifetime of memories shared.

After the pair married, Walker tended to his family farm until deciding to go to work for the University of Tennessee at Martin in 1951 as the head of mechanical maintenance. Walker was responsible for the heating and cooling system on campus. 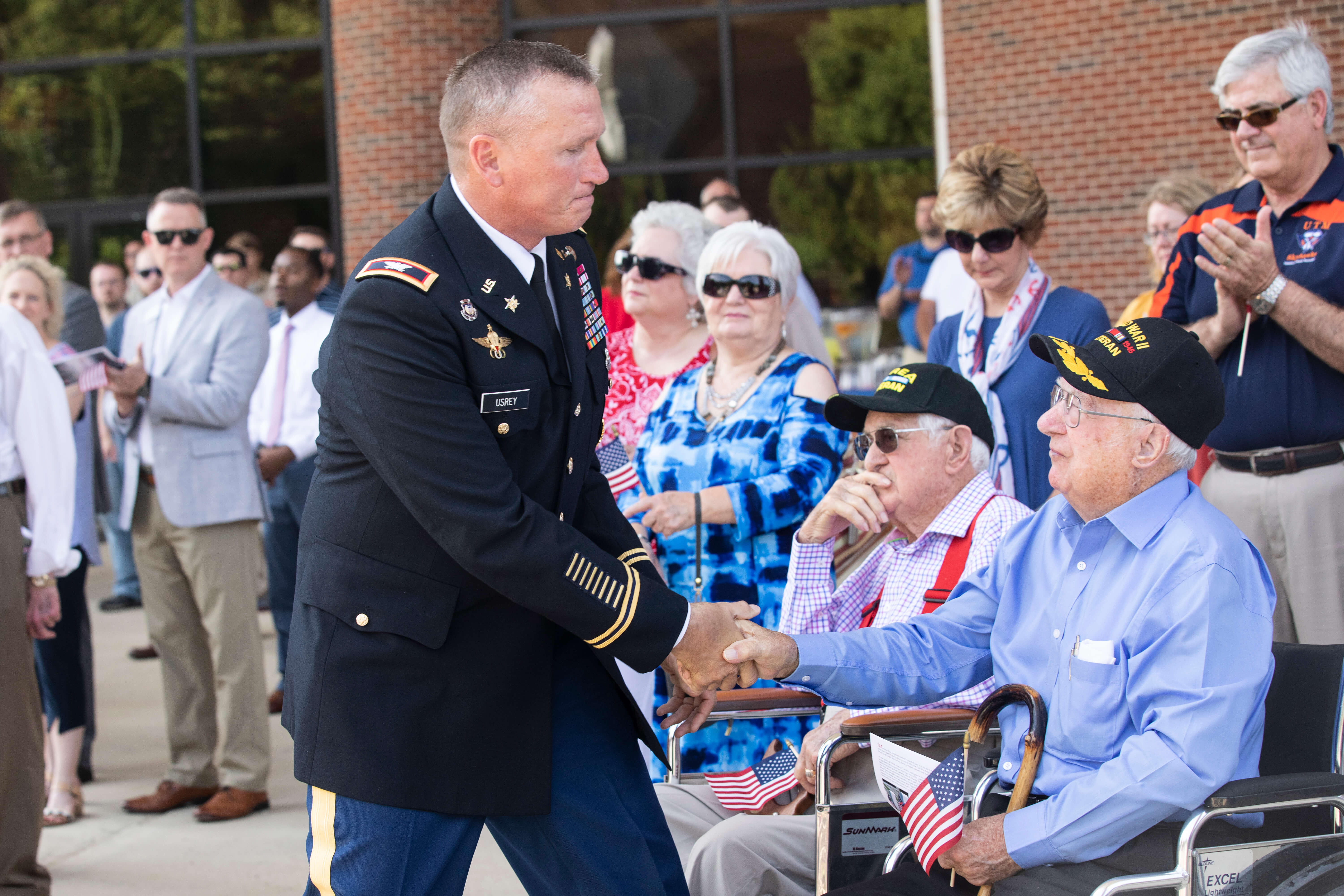 “When he started there, there were only 400 students. His (tools) he carried all over campus in a wheelbarrow,” said his daughter, Shelia Thompson.

The university now has over 7,100 students and has grown to a 250-acre main campus with a 680-acre teaching farm and five regional centers.

Walker retired from his full-time job at UT Martin in 1985, but quickly returned as a part-time employee until his retirement in 2003. He has seen many changes over the years and cherishes being a part of the growth of the university that provided a livelihood for him for many years.

As Veterans Day approaches, Walker and his family can be found celebrating his, his brothers’ and so many others’ service and sacrifice to this country, just as they do every year. Until recently, the 163rd held reunions for many years after the war, growing in participation each year. Eventually, there were 163rd “Striped-Ass Apes” coming to West Tennessee from all over the country to reunite with fellow soldiers and families.

The population of World War II veterans is dwindling as time passes and spending time with Walker is evident of that, but he will always remember the men he served with and the sacrifices each one made for their country.

In honor of the veterans who have served in the Martin community, the UT Martin Office of Veterans Services will host a virtual Veterans Day observance that can be viewed at utm.edu/veteransday2020.