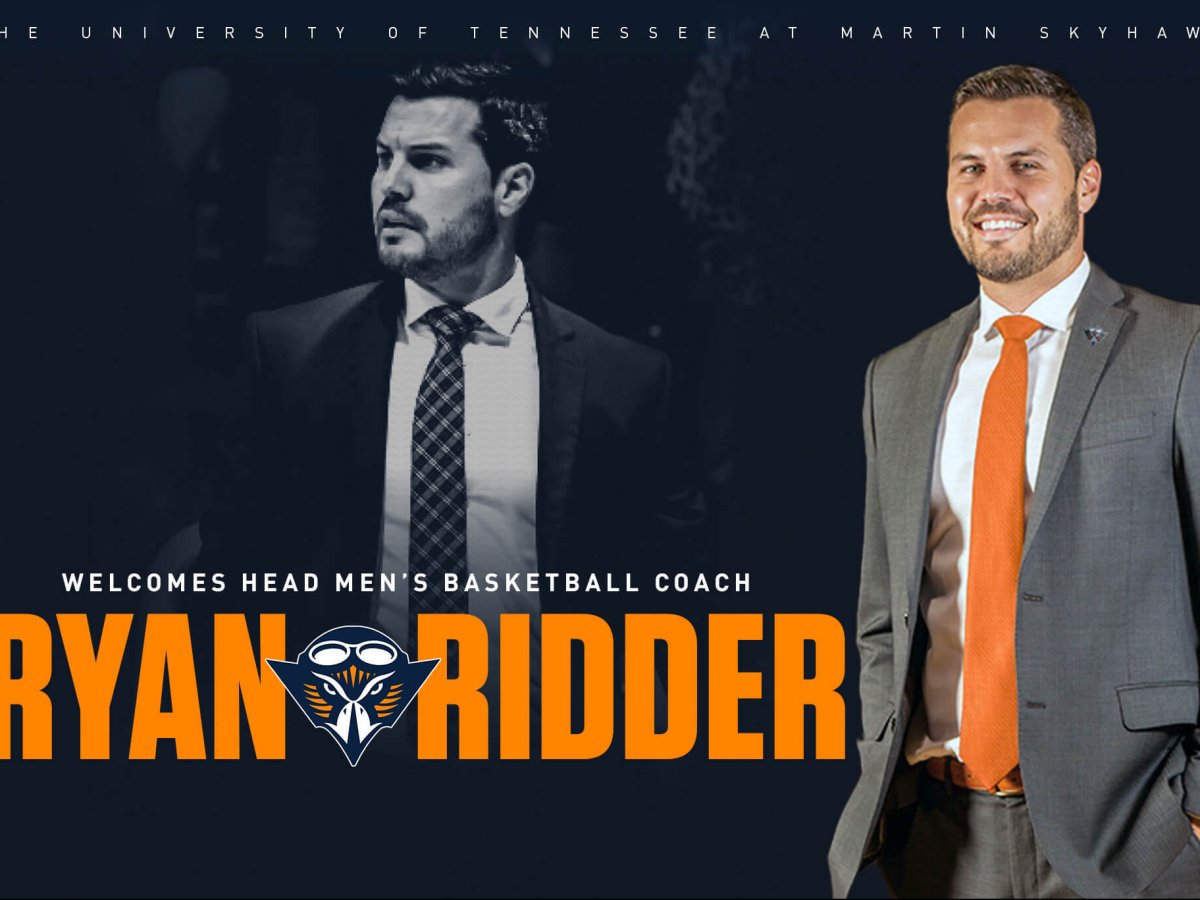 Athletic director Kurt McGuffin has announced the hiring of Ryan Ridder as the University of Tennessee at Martin head men’s basketball coach.

A formal meet-and-greet event with Ridder, his wife Jen and daughters Brixton and Remi will be held on campus next week with more details to follow.

“I am beyond thrilled to welcome Ryan, Jen and their young family to Martin,” McGuffin said. “Ryan is the son of a highly successful coach and has grown up in the business. I am confident that he has the game plan to take our program to another level. He has shown to be a builder of programs and does this with the highest integrity – getting all he can out of his players in every situation his career has led him. I believe the Skyhawk fan base will enjoy his energy and passion – he is simply a winner.”

“Ryan’s track record as a proven winner speaks volumes,” UT Martin Chancellor Dr. Keith Carver said. “He is a basketball lifer who has vast experience in building up programs. I am impressed by his vision he has set for UT Martin and we are confident that he is a great fit for not just the Skyhawk athletic department but for the entire community.”

Ridder joins the Skyhawks after four successful seasons as head coach at Bethune-Cookman University, a NCAA Division I member of the Mid-Eastern Athletic Conference. During his tenure in Daytona Beach, Fla., Ridder set numerous school records, posted a .646 winning percentage in league play and won the 2017-18 MEAC regular season championship.

A Lexington, Ky. native, Ridder owns a 143-73 record as a collegiate head coach, which also includes four seasons at Daytona State College. He boasted the most wins (48) in the first three years in Bethune-Cookman history before the school opted out of all sports for the 2020-21 campaign. From 2017-20, Ridder’s Wildcat squads posted a winning MEAC record for three consecutive seasons for the first time in school history, going 31-17 during that span.

“First, I would like to thank our Chancellor, Dr. Keith Carver and Director of Intercollegiate Athletics Kurt McGuffin for their trust in me and the opportunity to lead the men’s basketball program at UT Martin,” Ridder said. “Our family is excited and looking forward to building relationships with the campus and community. We are fired up to work together to build a program that reflects the special people of Martin and the university.”

Ridder’s debut season as a Division I head coach was historical as he helped guide Bethune-Cookman to just the second MEAC regular season championship in its 38-year history. For his efforts, he was named the Joe B. Hall Award winner, defeating candidates from schools such as Miami, Louisville, Oklahoma State and Washington for the honor that recognizes the top first-year head coach in the Division I ranks.

Overall, Ridder tutored five All-MEAC players, one MEAC Player of the Year, two MEAC Defensive Players of the Year and one MEAC All-Rookie team member at Bethune-Cookman. He led the Wildcats to their first-ever win over a Conference USA opponent (FAU) and increased the school’s NCAA RPI rating by over 60 points while in charge of the program.

Ridder, 36, began his head coaching career in 2013-14 at Daytona State College – accumulating a 95-28 overall record at the NJCAA level. He brought home Mid-Florida Conference championships in each of his four seasons after inheriting a program that went 6-25 during the previous season.

The Falcons were consistently ranked regionally and nationally under Ridder as he earned four consecutive conference Coach of the Year accolades. He mentored 25 all-conference performers, 16 players who advanced to play at four-year institutions and two NJCAA All-Americans while boasting a 96 percent graduation rate amongst his student-athletes.

Ridder got his start at the Division I level with three seasons as an assistant working under head coach Robbie Laing at Campbell University, located in Buies Creek, NC. He was an integral part of a Fighting Camels staff that signed the highest ranked recruiting class (64th nationally) in the ASUN Conference in 2013-14.

By the time Ridder departed to accept his first head coaching gig, Campbell was tabbed as the Big South Conference preseason favorite and had defeated Power 5 opponents such as Iowa and Auburn. The Fighting Camels got off to their best start in school history in 2011-12 and produced the Big South Freshman of the Year.

Ridder’s first collegiate job came at Embry-Riddle University, where he was a volunteer assistant under his father Steve Ridder in 2009-10. The Eagles collected a 30-6 overall record and continued its tradition as a national college basketball powerhouse at the NAIA Division II level. Steve is still the head coach at Embry-Riddle and has tallied 716 career victories to go along with a .708 winning percentage (ninth-best amongst active head collegiate coaches with at least 600 career wins).

Ridder began his collegiate playing career at the College of Wooster in 2003-05 before finishing up under his father at Embry-Riddle. After graduating with a degree in aerospace studies in 2008, he moved to North Carolina to embark on a coaching career. He was an assistant at North Raleigh Christian, trained youth players while working for the Hoop City U basketball training academy and additionally was the head coach for numerous teams engaged in international competition with 365 Sports for the 2008-09 academic year. He earned his Master’s degree in sport management with a concentration in intercollegiate athletic administration from California University of Pennsylvania in 2009.