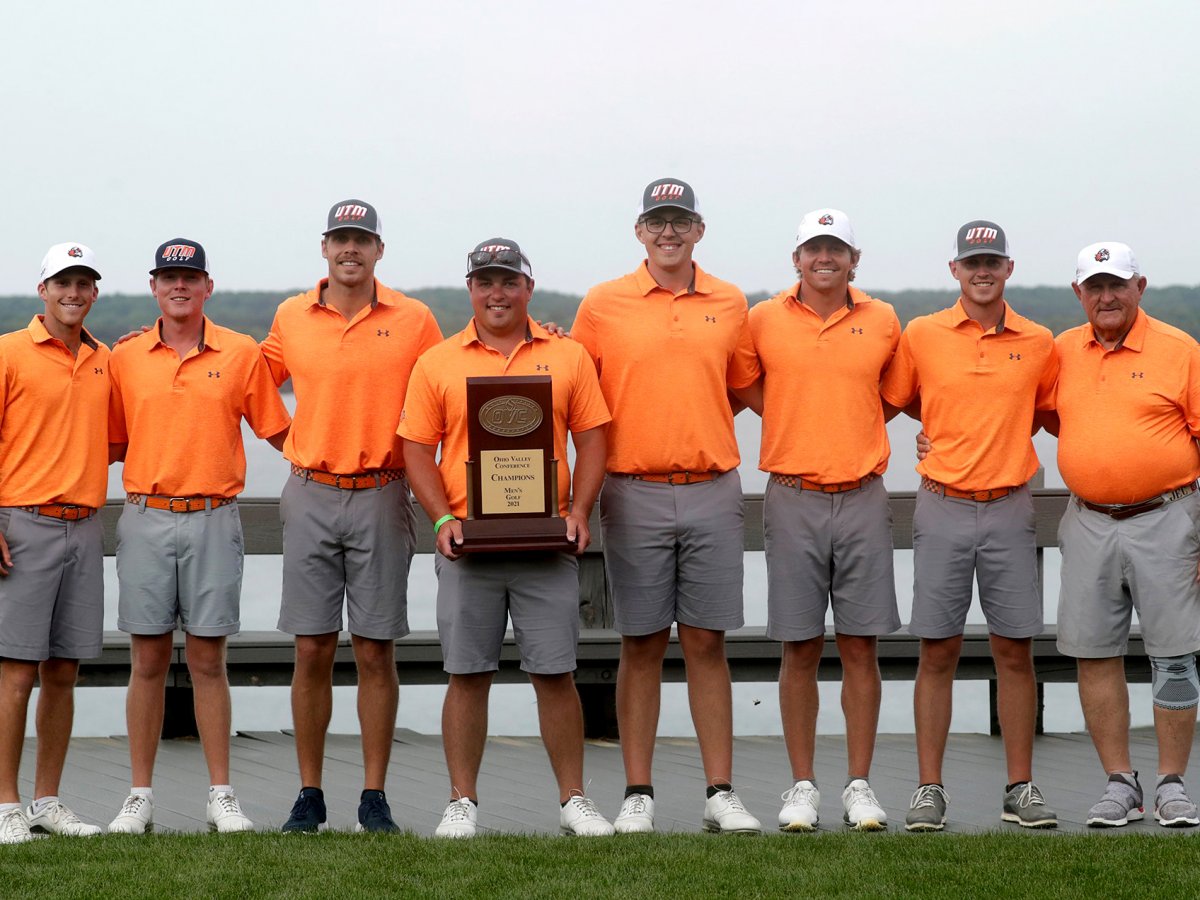 MUSCLE SHOALS, Ala. – Exactly five years to the day that the University of Tennessee at Martin earned its first-ever Ohio Valley Conference golf championship, the stars aligned for another title as the Skyhawks claimed both the team and individual hardware at the 2021 OVC Championships held at The Shoals on the Robert Trent Jones Golf Trail.

Entering the day with a two-shot lead, UT Martin overcame a slow start to hold off a Belmont squad by the same two-stroke margin. Along with the other two teams in the featured pairing, the Skyhawks shot a 292 (+4) in Round 3 to finish up with an 861 (-3) for the tournament. That final score is the best OVC Championship 54-hole performance in school history and is 18 shots better than the 2015-16 squad shot on their way to the league title.

At one point, UT Martin trailed by as many as three shots this afternoon but the Skyhawks persevered down the stretch. All 13 of their team birdies came from Holes No. 4 through No. 15, taking a seven-shot lead midway through the round before crossing the finish line on top. UT Martin completed the tournament with the most birdies (52) and ranking first out of 11 teams in par-5 scoring (4.75, -15).

“I don’t have the right words but I am so proud of this team,” Skyhawk head coach Austin Swafford said. “We had guys come back for this moment right here and they have all worked their tail off. We are blessed and excited.”

Individually, Jack Story shot a 68 (-4) for the third consecutive day, tying Belmont’s Evan Davis for co-medalist accolades. It was a back-and-forth battle between two of the league’s elite golfers as Davis – the 2021 OVC Golfer of the Year – made birdies on his final two holes to equal Story’s final tally of 204 (-12). Story and Davis’ 204 is tied with Jacksonville State’s Jesus Montenegro (2019) and Morehead State’s Charlie Bowles (1981) for the best 54-hole score in OVC Championship history.

“I don’t have the right words but I am so proud of this team,” Skyhawk head coach Austin Swafford said. “We had guys come back for this moment right here and they have all worked their tail off. We are blessed and excited.”

Story’s 68 was the best score for UT Martin today as the Dickson native tapped in five birdies and just one bogey to garner all-tournament status. His third career collegiate tournament win joins him alongside Brendon Caballero (2015) and Hunter Richardson (2016-17) as the only Skyhawks to chalk up OVC Championship medalist honors. He led the event in birdies (16) and par-4 scoring (3.80, -6) while topping UT Martin in par-3 scoring (2.75, -3).

Redmont posted a 75 (+3) today that featured one birdie and 14 pars on the scorecard. Also shooting a 75 today was Uehlein, who began the back-nine with three birdies in a five-hole stretch. Uehlein wrapped up his first career OVC Championship appearance with a total score of 221 (+5), which ranked 17th in the field of 57 golfers.

Tate Chumley played at even-par over the final 11 holes today before finishing with a 76 (+4). He led the team with 36 pars in the tournament and finished with an overall score of 222 (+6), which was also the identical score for Redmont.

With today’s win, the Skyhawks earned the OVC’s automatic bid into the NCAA Championship as the 2021 field will be announced on Wednesday, May 5 at 1 p.m. on the Golf Channel. The NCAA Regionals will take place on May 17-19 as UT Martin will find out if it is assigned to one of six sites that includes Noblesville, Indiana; Tallahassee, Florida; Albuquerque, New Mexico; Stillwater, Oklahoma; Kingston Springs, Tennessee; and Cle Elum, Washington. The NCAA Championship will be held on May 28-June 2 at Grayhawk Golf Club in Scottsdale, Arizona.