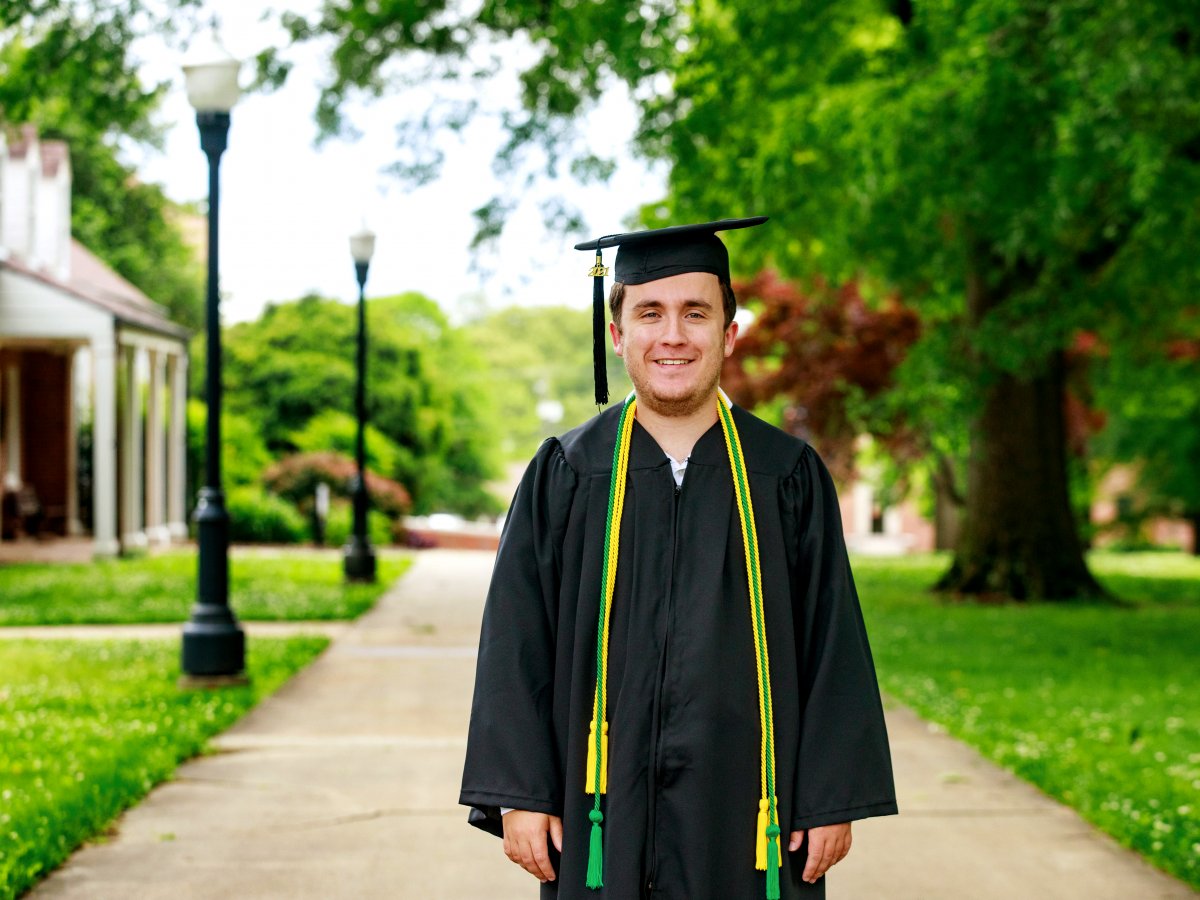 “We thought he may have been deaf,” said his mother, UT Martin Nursing Assistant Professor Dr. Susan Cramer Winters. “You’d slam a door near him and he wouldn’t flinch.”

Scans showed that Luke was born with hydrocephalus, a chronic neurological condition caused by an abnormal accumulation of cerebrospinal fluid around the brain. CSF has many functions in the human body; it surrounds the brain and spinal cord and acts as a protective cushion against injury. It also provides nutrients and proteins that aids in the brain’s normal functioning, and carries waste products away from surrounding tissues.

Hydrocephalus occurs when there is an imbalance between the amount of CSF that is produced and the rate at which it is absorbed. The CSF builds up, causing the brain’s ventricles to enlarge and the pressure inside the head to increase. The condition affects more than 1 million Americans, ranging from infants and older children to older and middle-aged adults, as well as seniors.

Typically, those with hydrocephalus display a disproportionately large head, caused by the pressure of the CSF against the cranium. In Luke’s case, he was relatively fortunate to have been diagnosed in infancy.

“Luke was lucky in that he was young enough that his skull was still somewhat malleable,” Susan said. “People who are diagnosed later in life have a lot more damage because the skull is already fully formed.”

Once a death sentence, hydrocephalus is now treated surgically through the insertion of an internal shunt from the brain to the abdomen, providing for release of excess fluid. But while technology has extended the life of hydrocephalus patients, that life is not easy. The condition affects fine motor skills, making simple tasks like buttoning a coat or holding a fork a difficult procedure. Balance is also affected; Luke was 18 years old before he could fully ride a bicycle.

“He had physical therapy twice a week for three years and could not stand on one leg,” Susan recalled. “With the bicycle, he just persisted – he would just try and try and one day, we looked out the window and he was motoring down the street. He just keeps trying until he gets it.”

“Luke is a visionary,” said Kameron Echols, CPAD assistant director and Luke’s supervisor. “He is able to look at the bigger picture, and he is able to figure out the best way to talk to a student who might not be able to articulate what they want to say.”

That persistence has aided Luke throughout his entire life, from playing soccer and golf in high school, to earning a Spanish language scholarship, to learning how to drive.

“There’s nothing wrong with Luke’s IQ,” Susan said. “He’s undergone some very strenuous neuropsychological evaluations. He’s very smart, but his processing speed is slow. Something that another kid gets right away, it takes him a little while to process it.”

Instead of getting discouraged, Luke has learned to adapt, finding alternate approaches to a situation. This makes him an excellent employee in UT Martin’s Office of Career Planning and Development, where Luke meets with students as a career peer educator.

“Luke is a visionary,” said Kameron Echols, CPAD assistant director and Luke’s supervisor. “He is able to look at the bigger picture, and he is able to figure out the best way to talk to a student who might not be able to articulate what they want to say.”

Admittedly, Luke said he has a certain affinity for helping those freshmen and sophomores who come to the CPAD not knowing what to do next. 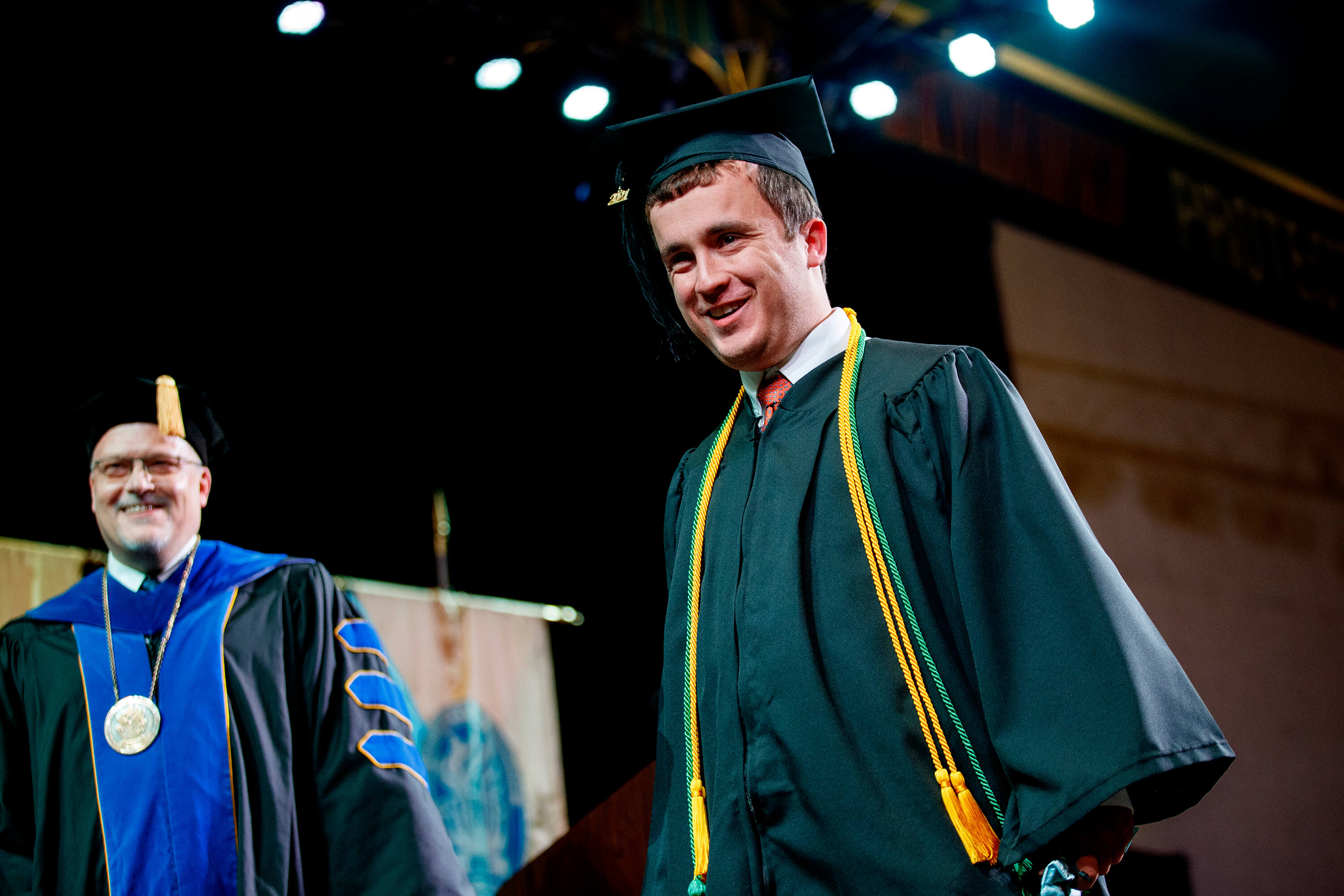 Winters crosses the commencement stage May 8, 2021.

“I switched majors a few times at UT Martin, and I definitely can relate to those people who come in that need to find some focus in what they want to do as a major, or as a profession,” Luke said. “I have a lot of diverse interests and situational experiences that have helped me grow and helped my problem-solving skills.”

As president of the UT Martin College Democrats, Luke started a podcast to keep the group active under the COVID-19 pandemic when meeting in person was not possible. In his work with the Minorities in Agriculture, Natural Resources and Related Sciences student organization, Luke organized a quiz bowl team that competed nationally and presented at a conference.

“He’s a great organizer,” said Dr. Annie Jones, CPAD career counselor and MANRRS advisor. “He’s easy to talk to, intelligent and charismatic. You naturally feel very comfortable with him, whether you’re a student or faculty member. He just has a natural ability to put people at ease and bring out the best in them.”

As an agricultural business student, Luke led a student-centered marketing project with the Memphis Grizzlies basketball team. The NBA organization was looking to expand their marketing to appeal to Tennessee’s rural agricultural communities.

“(Luke) really took the lead on that,” said Dr. Joey E. Mehlhorn, professor of agriculture, geosciences and natural resources. “He kept the students going, pulled it all together, and presented the report to the Grizzlies. Employers are looking for people who can motivate others and stick with a project until it’s done, and that is Luke to a ‘T’.”

It was Mehlhorn who recommended a second degree in agricultural business to Luke, who was majoring in accounting and initially resistant to the thought of additional coursework.

“He comes from a long line of agricultural people, and he already had the business acumen from the accounting side that would be a natural fit,” Mehlhorn said. “But the reality is, I couldn’t see Luke in a solitary position like accounting. He’s definitely a people person, he’s outgoing, and he will do well in a position where he’s working with people and helping them.”

Ironically, those with hydrocephalus typically find math and foreign languages the most difficult subjects to master – two subjects at which Luke excels.

“He’s definitely a people person, he’s outgoing, and he will do well in a position where he’s working with people and helping them.”

“We’d go to hydrocephalus conferences and I would hear horror stories of parents who were pulling their hair out trying to help their kids learn math,” Susan said. “I was always the exception to the rule, with Luke graduating with an accounting degree. I say they must have added something to him during one of his surgeries.”

During his time at UT Martin, Luke endured two surgeries to repair a failing shunt. The first was over a Christmas break, but the second occurred while he was taking a summer class. Neither caused a break in his studies. 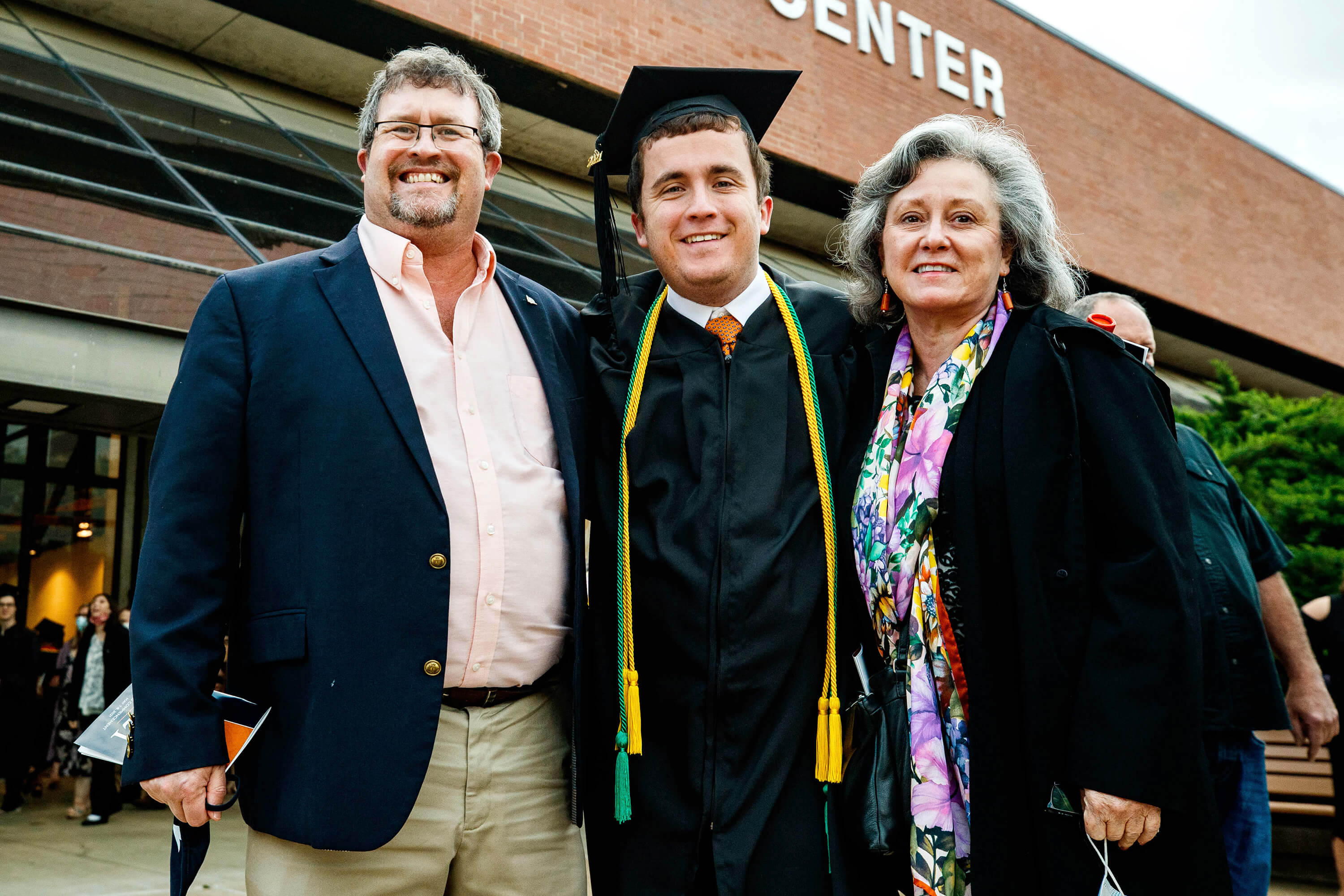 Winters with his parents, Dr. Todd A. Winters (left), Dean of the College of Agriculture and Applied Sciences and Dr. Susan Cramer Winters (right), assistant professor of nursing.

“Fortunately, it was (an) American Politics (class), and I was familiar with the subject, so even though I had just had brain surgery, it really wasn’t that much of a problem,” Luke said.

Not that he would have asked for help if he had needed it, he admitted. Because of his condition, Luke likely would have qualified for accommodation by UT Martin’s Office of Disability Services. He may have been offered extra time to take exams or complete assignments, but he declined to pursue those accommodations, despite Susan’s encouragement to do so.

“It really comes down to the fact that any person with a chronic condition such as mine, we want to see ourselves as normal,” Luke said. “In some cases, I probably should have asked for more time to complete some things, but I guess through my own stubbornness, I wanted to be seen on the same level as any other student.”

What everyone seems to agree on is that UT Martin was the right fit for Luke.

“It really comes down to the fact that any person with a chronic condition such as mine, we want to see ourselves as normal.”

“Even though his parents are both at UTM, it was absolutely Luke’s choice to come here,” said Luke’s father, Dr. Todd A. Winters, Dean of the College of Agriculture and Applied Sciences. “(Susan and I) encouraged that, because we knew he would do better here than at a large university where we just dropped him off in a dorm. What’s special about UT Martin is that anybody can succeed here, no matter who you are or the challenges you’ve had.”

With his dual degrees, Luke is optimistic about his future and the opportunities it holds. “I’m grateful to my parents and everyone who made (UT Martin) a fantastic place to be these last five years,” he said. “The next step is a little scary, but I do feel that I am prepared for whatever comes next.”

Whether that future includes marketing, accounting, career counseling, helping people in a medical capacity, or something entirely unforeseen, Luke’s family and friends are confident in his abilities to excel.

“He is a special person – someone with empathy, with knowledge, with talent, and the ability to roll with the punches,” Echols said. “I would say he has a 100 percent chance of succeeding wherever he goes.”

Tags:College of Agriculture and Applied Sciences, College of Business and Global Affairs, Commencement, Faces of UTM