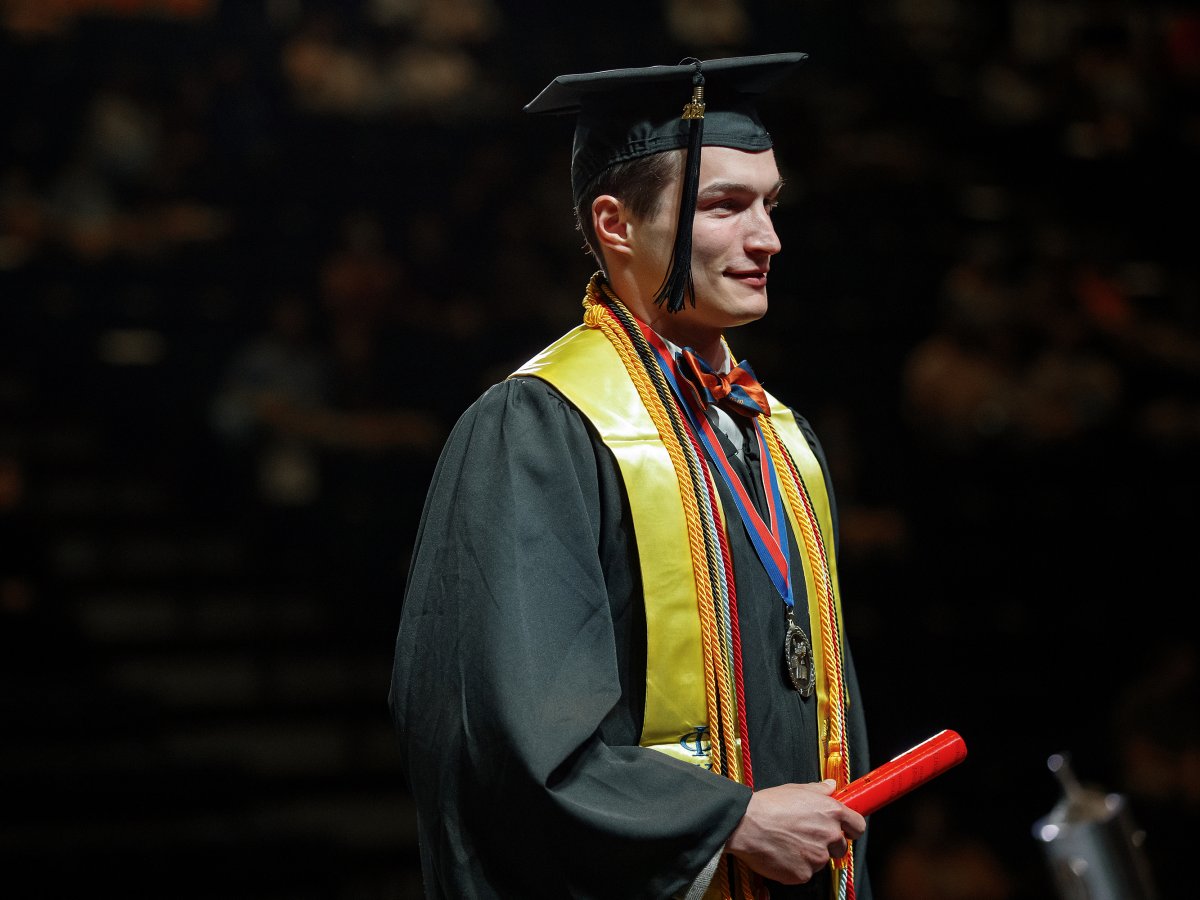 For Samuel Walgren, graduating from college with a degree in history is the realization of a lifelong dream.

“I was about 10 when I knew I wanted to do something in history,” said the Milan native, who received his bachelor’s degree in history from the University of Tennessee in Martin on May 8. “It’s the only subject to me that makes sense, because it’s got everything – anything you want to learn about you can learn in a history class.”

Walgren credits his family with getting him started on the road to becoming a historian.

“My parents would tell me all these fascinating oral histories of their parents and grandparents, which drove my imagination at an early age,” Walgren said. “My grandpa would tell me stories of my Civil War ancestors, and my passion for studying the Civil War started in about fourth or fifth grade. It’s the truth – I was obsessed.”

He was still passionate about history in 2016, when he met Dr. David Coffey, UT Martin professor and department chair of history and philosophy at South Gibson High School’s junior-senior career day.

“My grandpa would tell me stories of my Civil War ancestors, and my passion for studying the Civil War started in about fourth or fifth grade. It’s the truth – I was obsessed.”

“I got to talking with (Coffey) about history, particularly military history,” Walgren said. “He is a true historian of the American Civil War, and I knew I wanted to study with him, and that’s one of the big reasons I chose UT Martin.”

Coffey recalls meeting Walgren, and being initially impressed with the student’s maturity, his passion for military history, and the breadth of his knowledge.

“He was a serious student from the very start, and I really hoped that we could attract him to UTM,” Coffey said. UT Martin’s department of history and philosophy did not disappoint.

“I have been impressed with every single professor I’ve had at UTM,” said Walgren, listing no fewer than 10 professors, instructors and lecturers in a variety of disciplines he has studied with over the past four years. “Some were tougher than others, but all of them were approachable and every single one of them answered my questions and were happy to do so.”

“I have been impressed with every single professor I’ve had at UTM.”

“I really enjoyed her class, and she held several virtual office hours that were helpful to my creativity,” Walgren said.

But history has been, is, and will always be Walgren’s true love, and as a student of history, he didn’t disappoint UTM, either. From recruiting him to acting as his advisor and then having him in four classes, including an independent study, Coffey said Walgren proved to be one of the best students he has had in 20 years at UT Martin.

“From the start, he soaked up everything presented to him,” Coffey said. “He is thirsty for knowledge, and always thinking of the next step, the next level. That can be a challenge for (professors), but when you get someone like Samuel in class it’s a real treat, because we’re building the next generations of historians.”

Tom Elam Distinguished Professor of History at UTM Dr. Alice-Catherine Carls made an exception for Walgren, allowing him to take her “Europe from War to War 1914-1945” class, a course typically reserved for upperclassmen, and a prerequisite for students wishing to take its corresponding European field trip in the summer of 2018.

“Usually, I don’t let freshmen take that class, but Samuel really wanted to go on that trip,” Carls said. A joint venture with the history department of Union University, the 12-day trip included stops in England, Belgium and France, and commemorated the centennial of the end of the Great War in 1918.

“To see Flanders Fields in Belgium, the actual trenches, to walk through the (Forest of) Argonne (France), it was an amazing experience,” Walgren said. One highlight was a day-long excursion to sites relating to the Battle of Verdun, France, renown as one of the longest and bloodiest battles of World War I. Lasting 10 months, the battle resulted in the death of more than 300,000 French and German soldiers. “The destruction is still visible. It’s incredible to see all of the bomb craters still there, entire towns just leveled.”

Students were also treated to a surprise stop – while heading to Varennes, France, the coach detoured near the German Crown Prince’s bunker, where they walked through some of the German army’s World War I trenches. “That was not even on the itinerary, but our bus driver knew about it and took us there,” Walgren said. “To see a German trench, that was pretty much a dream come true.”

Course lectures, special projects and assignments at UT Martin led to Walgren’s deeper appreciation for the subject of history.

“I was assigned citation exams, close readings, and a research paper in my (History) 299 (History for Historians) course, which helped cultivate my skills. (History) 499 (Senior Seminar: Historical Research and Writing) put everything I had learned for three years into a cohesive senior paper, and I also had the opportunity to study abroad and do a public history internship – all of that helped with my understanding of history and the world around me,” Walgren said.

“Samuel’s knowledge is not all book knowledge,” she said. “Legitimate reenactors know the value of historical details down to the shape of a button or type of rifle you’re carrying or where the helmet strap goes. He is attentive to those details, and that makes him a better historian.”

Walgren’s passion for history fuels his hobby as a historical reenactor. Also known as living history, reenactments place modern volunteers in simulated historical situations with the goal of enlightening the public to conditions of life in the past. Historians differ on the efficacy of reenactment, as too often the participants are more focused on entertainment than on scholarship.

“Some people see it as a game; they put on a costume and have a good time without much thought to authenticity,” Coffey said. “Done wrong, reenactment gives history a bad name.”

By contrast, Walgren looks at reenactment as a teaching opportunity. “He’s got a level of specialty there that is pretty admirable,” Coffey said. “He started out with the Civil War, but he is doing WWII performances now and even Vietnam, and his preparation and attention to detail is something I can’t fault.” 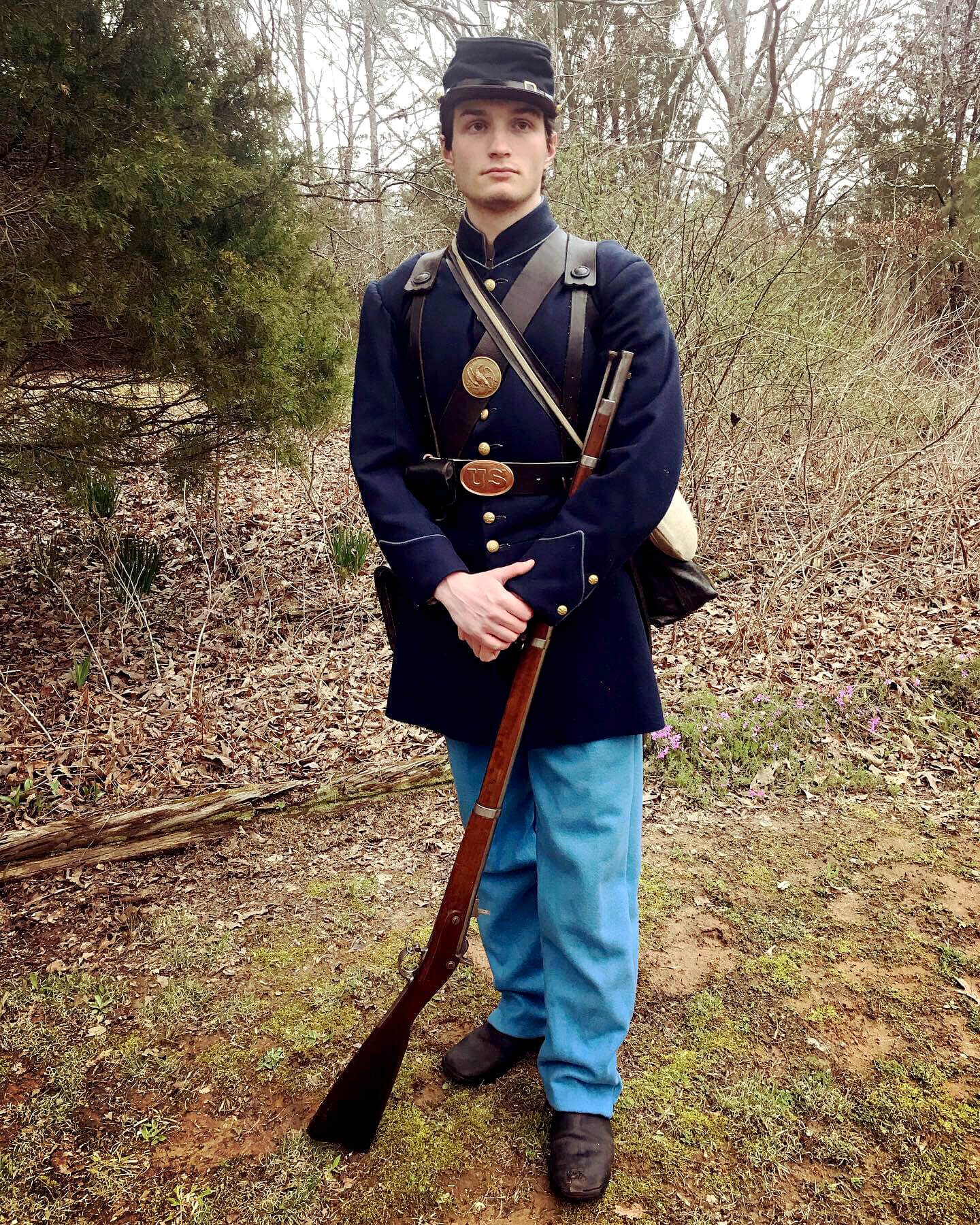 Carls said Walgren’s experience as a reenactor aids in his understanding of the past.

“Samuel’s knowledge is not all book knowledge,” she said. “Legitimate reenactors know the value of historical details down to the shape of a button or type of rifle you’re carrying or where the helmet strap goes. He is attentive to those details, and that makes him a better historian.”

Walgren’s maturity, writing ability, and natural curiosity make him one of the department’s favorite graduates.

“I knew when he came to me in September with a six-page outline that he was going to be a joy to work with,” said Carls, Walgren’s senior paper advisor. “It wasn’t me just teaching him, it was more a dialogue, a fluid conversation between two people interested in history. It was fantastic.”

Walgren will pursue a master’s degree in history at Oklahoma State University, where he will study 19th Century American history, public history, and the history of Latin America.

“I’m awfully proud of him and I am lucky to have worked with him as much as I did,” Coffey said. “He’s a once-in-a-generation kind of talent. He just does everything right.”