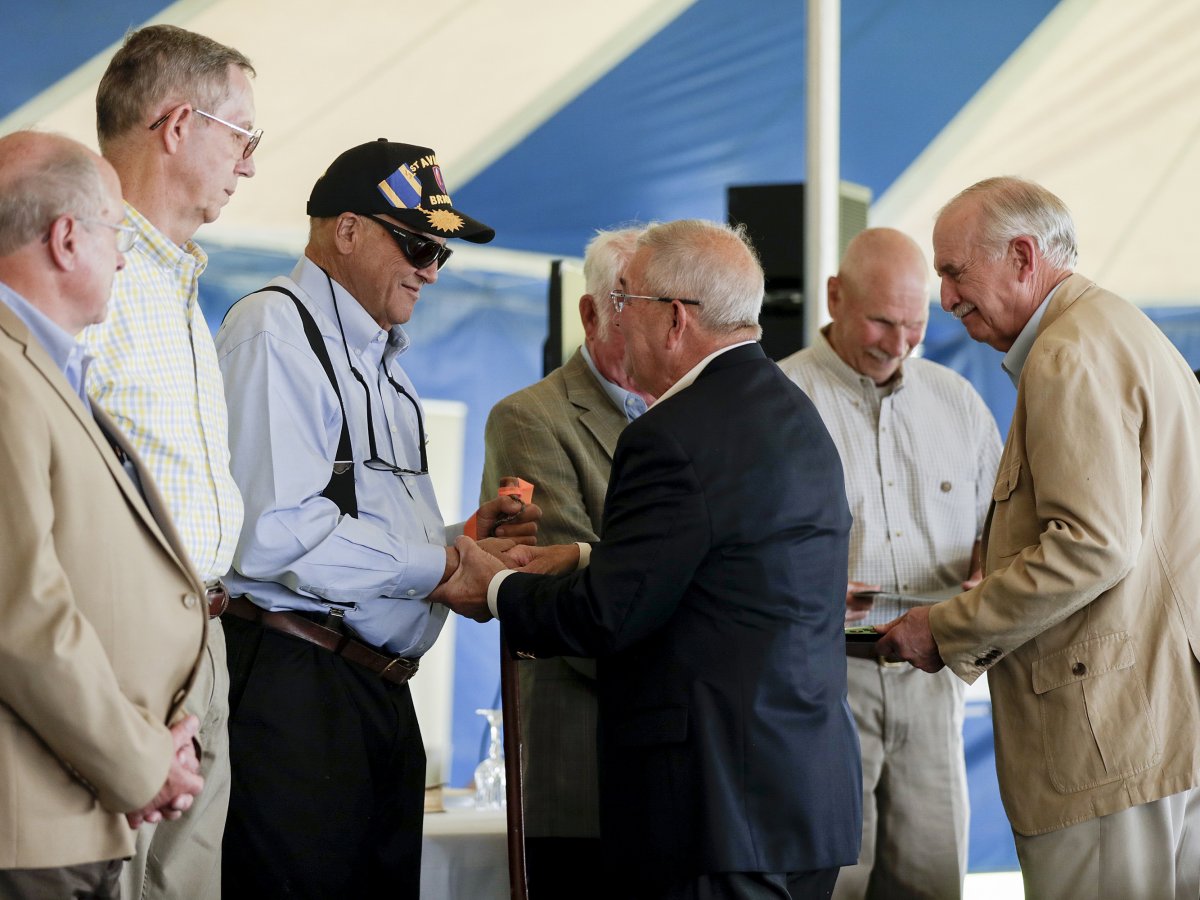 Vietnam War veterans who are alumni of the University of Tennessee at Martin’s Alpha Upsilon Chapter of the Alpha Gamma Rho Fraternity were honored Saturday during the chapter’s annual Founders Day celebration held the Martin Parks and Recreation Complex. Fourteen of the 17 living alumni returned for the event that included the presentation of Vietnam War veteran pins as part of the Founders Day luncheon program. Twenty-one AGR alumni served in Vietnam.

The event, which fell on Armed Forces Day, was delayed a year by the COVID-19 pandemic and attracted an enthusiastic crowd that participated in an alumni meeting, heard several recognitions and speakers and were treated to optional helicopter rides. The UT Martin Army ROTC Color Guard posted the colors and also presented taps at the event’s conclusion in honor of the four deceased veterans.

The program included recognition of Cindy Kent, biographer and editor of the book Better Men: Alpha Upsilon in Vietnam released in 2020. The book includes her interviews with each of the 14 veterans about his Vietnam War experiences. “It’s been the honor of my life to do this,” Kent said. “We all want to do something that matters to somebody else that we know. … These men that you read about (in the book), they’re my brothers.” A Friday night reception held in honor of the 14 veterans provided opportunities for each to collect signatures for personal copies of the book and to share college and war memories.

The pinning ceremony was conducted by three retired generals who are UT Martin graduates: John “Glad” Castellaw, U.S. Marine Corps; Dennis Cavin, U.S. Army; and Dr. Ron Sholar, U.S. Army Airborne. A composite photograph of the honorees was then unveiled that will hang near the chapter room in the AGR house located on 225 University Street. Buddy Mitchell acknowledged the recognitions on behalf of his fellow Vietnam War veterans and called his friends a “band of brothers” for the bond they share.

Dennis Cavin offered the event’s keynote remarks and expressed appreciation for his part in honoring those who served. “It’s the most humbling and a sincere privilege for me to acknowledge the lives, the service and the sacrifice of 21 men, brothers – 19 soldiers, one Marine, one sailor – who served our nation during possibly the most difficult time in our nation’s history.”

Cavin thanked veterans and their families but acknowledged that gratitude for their sacrifices was delayed. “Today’s recognition, belated though it may be, is designated as corrective effort to make sure you know how much your service and sacrifice are appreciated,” he said. “… Freedom more often than not comes cloaked in uncertainty. The cost of independence remains high, but we’re willing to pay it. We do not pay it gladly, but we pay it in deep reverence and thanks to those who shoulder the burdens, the pain, the loneliness of separation for us.”

Cavin said he closes many of his presentations by quoting Isiah 6:8 that says, “Then I heard the voice of the Lord saying, ‘Whom shall I send? And who will go for us’?” He used the verse to honor the courage of those who responded to the call of service in Vietnam. “For 19 soldiers, one Marine, one sailor – their response was, ‘Here am I, Lord, send me,’” Cavin said.

“Through your presence today, you have chosen to honor America’s soul, this generation of Vietnam warriors. A hardy welcome home, brothers. Stand tall, be proud, and we salute you.”

The Alpha Upsilon Chapter of Alpha Gamma Rho was established in 1963 at UT Martin. More than 1,100 members have been initiated since the chapter’s installation.