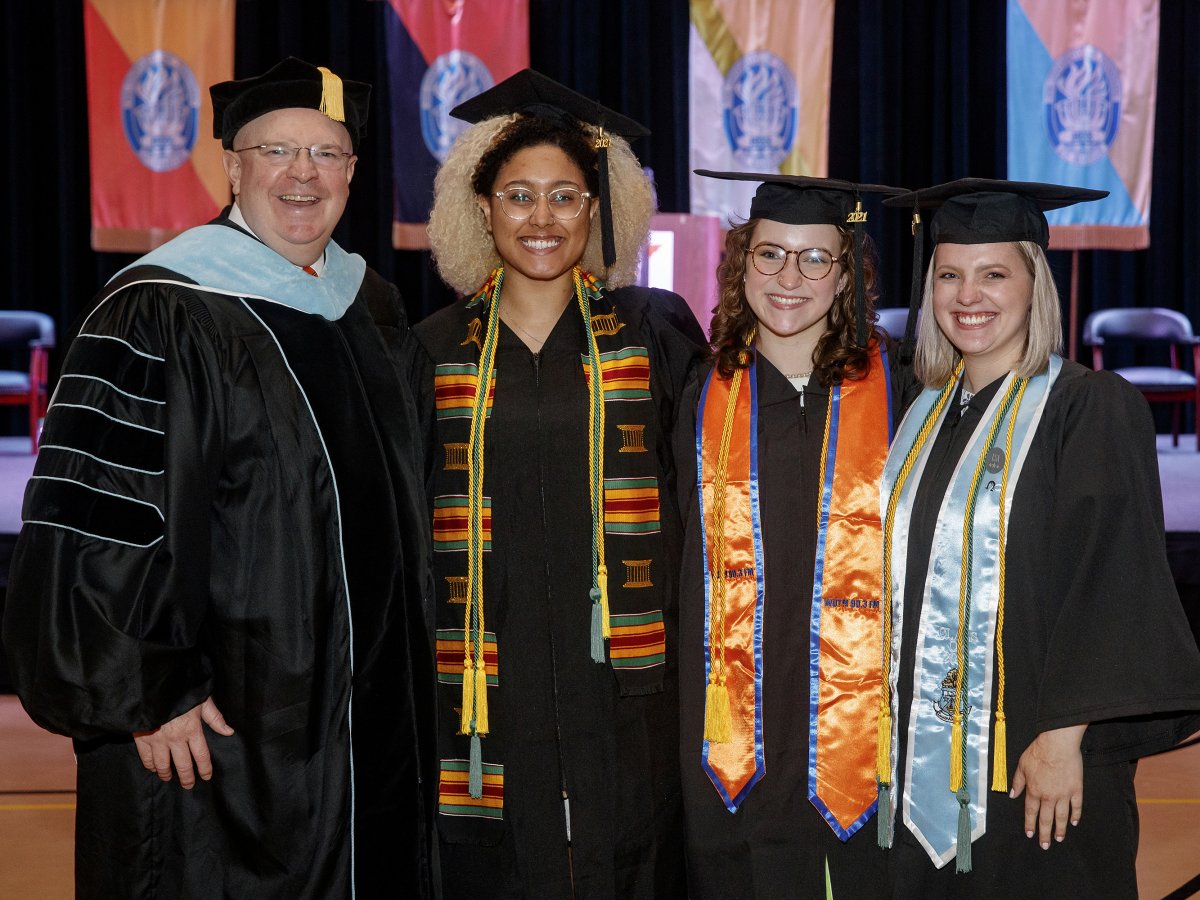 (l-r) Dr. Andy Lewter, UT Martin vice chancellor for student affairs, is pictured with Alexis Millsaps, of Columbia, Kayla Brooks, of Dickson, and Bailey Radnitzer, of Des Plaines, Illinois, recipients of the Paul and Martha Meek Leadership Awards during the University of Tennessee at Martin’s spring 2021 commencement exercises May 8.

Brooks, a communications graduate, served as the TISL Times Newspaper Editor for the Tennessee Intercollegiate State Legislature, is currently president of the Radio, Television and Digital News Association, and rose to the role of program director at WUTM 90.3 “The Hawk” radio station. She performed in the Vanguard’s production of Arthur Miller’s “The Crucible,” and served on the SOAR staff welcoming incoming freshmen. In her work in the Office of Campus Recreation as group fitness instructor, Brooks led more than 300 yoga classes for students, faculty and staff and is certified by the Fitour Fitness Group. During COVID-19, Brooks led these courses through Instagram, teaching two classes per week with more than 1,900 students in attendance. Additionally, under COVID-19, Brooks became an essential worker and produced daily newscasts for WUTM.

“Kayla raises the bar when it comes to being a role model for students because she genuinely values teamwork and is highly motivated to succeed in everything she does,” said Kimberly Olive-Milligan, office of campus recreation. “We greatly appreciate her contributions to our programs.”

Millsaps, communications graduate and transfer student, has had a sizeable impact on UTM in a short amount of time. As a SOAR orientation leader, she traveled to conventions and attended numerous leadership seminars. As a Transfer Boot Camp mentor, she called on her own experiences as a transfer student to help her fellow students transition. That opportunity led Millsaps to create the Transfers for Life student organization. She has also held leadership roles in the Black Student Association and on the Civil Rights Conference Planning Committee. She has been a vocal leader in the push for a mandatory African American history class on campus.

A nomination letter in support of Millsaps noted her outstanding leadership abilities and her proven record for fighting for causes she believes in.

Radnitzer, a bachelor of fine arts graduate, has been involved in service, scholarship and leadership from her very start at UT Martin. She served as SOAR orientation leader for her first three years and as a First Year Initiative PEP leader for the last three years. She has received several registered student organization awards, including the University Service Award and the Emerging Leader Award. She has held three leadership positions of the League of Striving Artists student art group, including president. She is an active volunteer both on-campus and off, working with Red Fern Animal Shelter in Dresden, where she photographs animals, updates their biographies, and promotes them on social media to aid in their adoption.

“Bailey is an amazing recipient for the Meek Award, as she has lived every part of it and continues to push the values behind its conception,” said Jason Stout, professor of art. “She is the best of what we strive for here, and the best example of what we try to get other students to be a part of.”

Dr. Paul Meek served the UT Martin campus as executive officer, dean, UT vice president/chancellor from 1934 to 1967. This award was originally established and funded by the three Meek children to honor their parents. The Paul and Martha Meek Leadership Award is the only award given during commencement each semester.