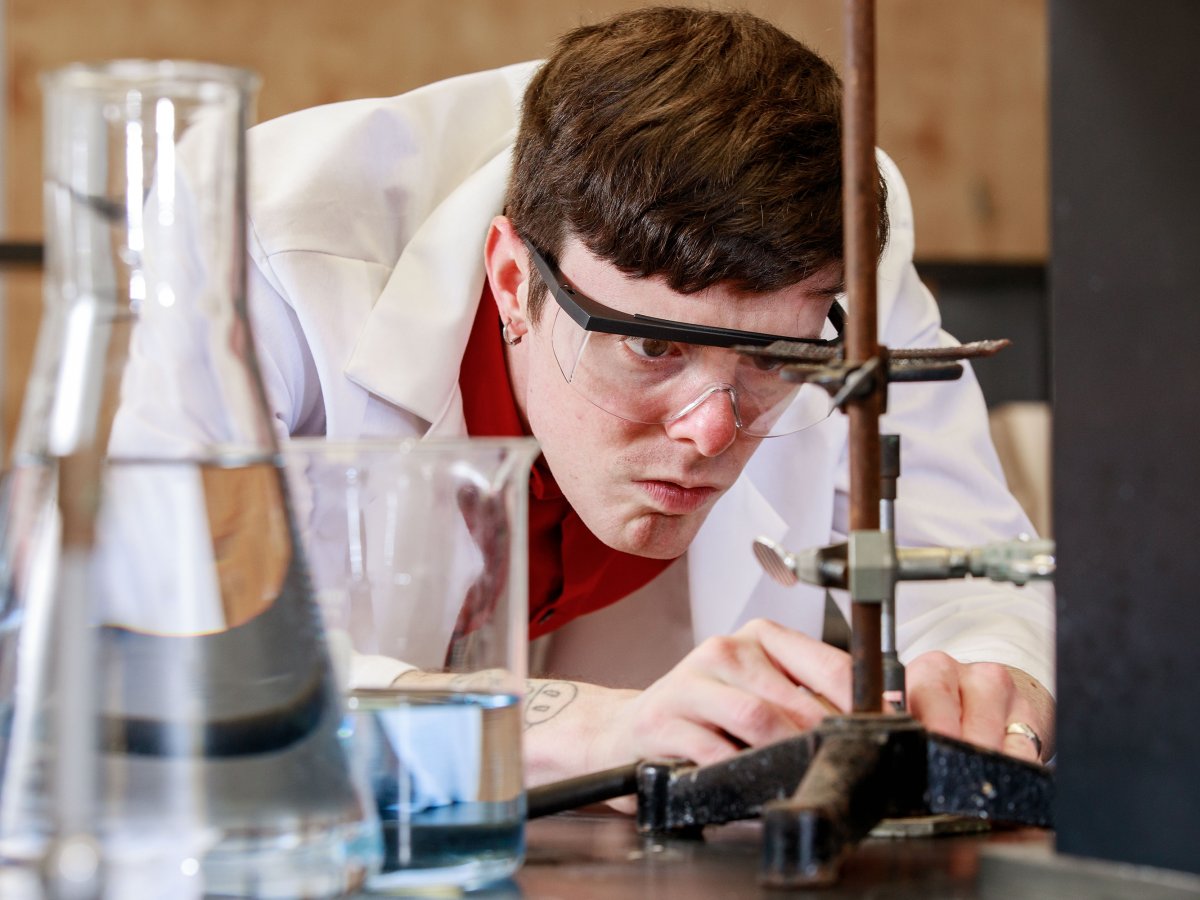 UT Martin chemistry major, Kyle Carter, overcame many obstacles to eventually graduate with his bachelor of science degree in chemistry and a minor in physics.

The last 12 years haven’t been the easiest for Kyle Carter, but the last two have been the best of his life.

The Troy, Tennessee native first came to the University of Tennessee at Martin in 2009 to pursue a music degree. But despite trying a variety of majors and academic programs, Carter struggled.

“I really hadn’t found anything I was passionate enough about to turn into a career,” Carter recalled. “As a result of that, I didn’t feel motivated to do my best. I did eventually pursue biology and chemistry as a major (in 2013), because I had Chemistry 121 with Dr. Shelton and it just clicked with me, but by that time I was still lacking motivation, and that played a huge part in me not being able to succeed at that time in my life.”

Dr. Abigail Shelton, UT Martin associate professor of chemistry, recalls having Kyle as a student in her general chemistry lecture and lab in fall 2012.

“Kyle was figuring out who he was and what he wanted to study,” Shelton said. “He occasionally skipped lecture and labs… and had some bumps in the road soon after.”

Carter eventually withdrew in Spring 2014, under a cloud of incompletes and poor academic performance. Convinced he needed a fresh start, he moved to Murfreesboro and enrolled at Middle Tennessee State University in the fall of 2017.

“Kyle was figuring out who he was and what he wanted to study,” Shelton said. “He occasionally skipped lecture and labs… and had some bumps in the road soon after.”

“I’d never lived outside of this area, and I thought maybe I might do better without the baggage of my past performance,” Carter said. For a short while he did excel, doing undergraduate research and earning a 4.0 GPA. But it wasn’t long before his past caught up with him. After one semester, his financial aid was pulled due to his past academic performance, and Carter moved back to Martin, regained his prior job doing property maintenance, and considered his next move.

“One thing I did have was the experience of meeting (Shelton), as well as that one semester at Middle Tennessee State that allowed me to prove to myself that I was ready to be a good student,” Carter said. “I looked into different career paths before coming back and I distinctly remembered I enjoyed chemistry. I enjoy the theory, the classroom setting, I have a personal aptitude for it. Working in the lab stresses a lot of students out, but for me, it’s relaxing. I thought chemistry could be something I enjoy enough to make a career out of.” 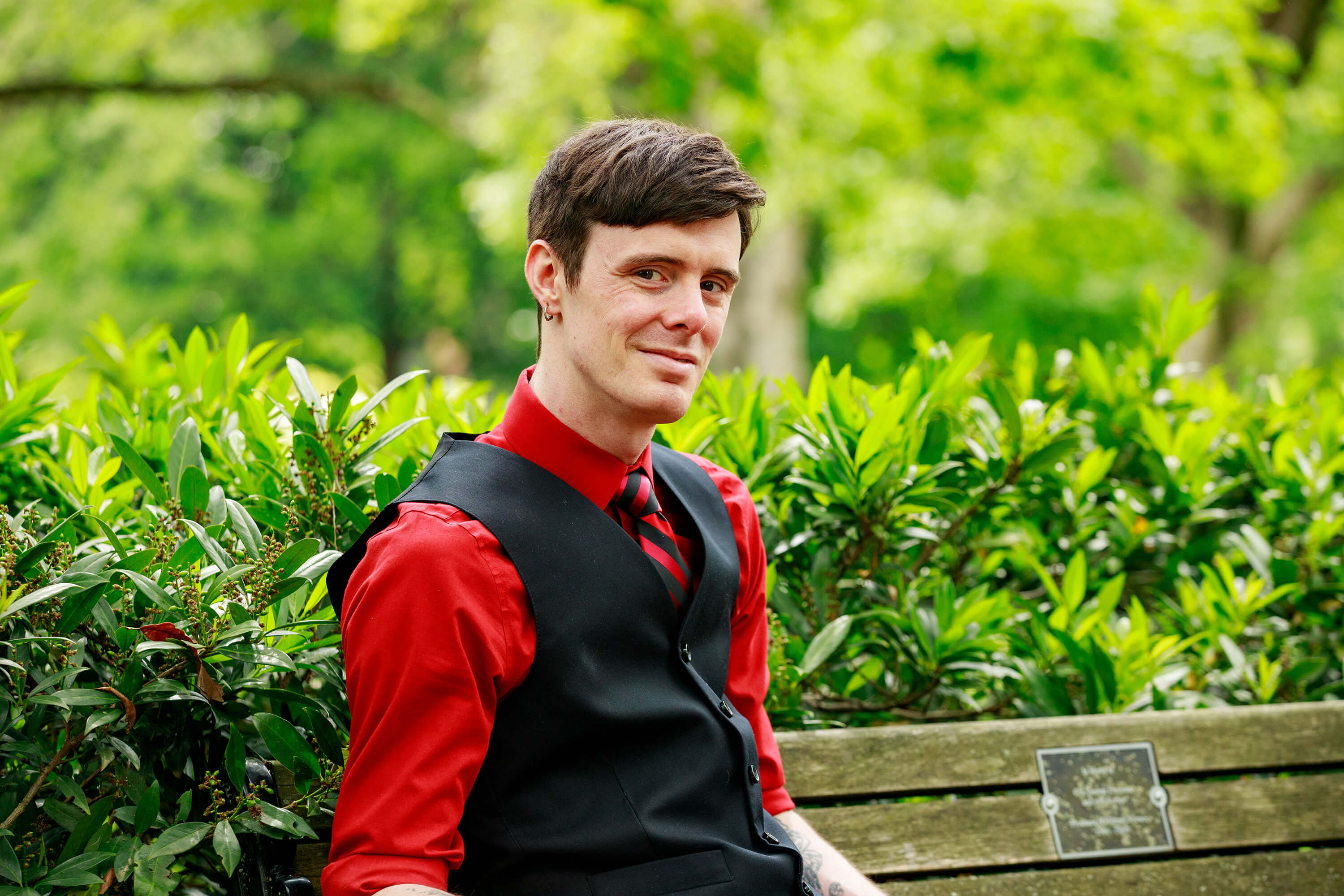 Shelton was happy to see him return to UT Martin. “Kyle found that the two general chemistry courses he had taken, along with the labs, had sparked something in him worth coming back for.”

Re-enrolling in spring 2019 and with only enough financial aid for three semesters, he “worked my butt off to graduate in that time frame,” Carter said, taking 18 upper-division courses in fall 2019, 20 credits in spring 2020 and 19 credits in fall 2020 to wrap up his chemistry degree.

UT Martin Associate Professor of Chemistry Genessa Smith, as Carter’s advisor, also had some concerns about his heavy course load and met with him to discuss it.

“I learned that his choice of classes was not borne out of ignorance or naiveté,” Smith said. “He had given careful thought to every detail of his plan. He explained to me about the three semesters of financial aid, and made it clear he wanted to take as many classes as possible to improve his GPA enough to go to graduate school. Although the odds did not seem in his favor, I was compelled by his determination.”

Carter admits he likes to stay busy and thrives under pressure.

“(My professors) were really unsure about my course load at first, but they let me make that decision, and were flexible with me in a way that helped me succeed,” he said.

As the semester unfolded, Smith and Shelton watched Carter launch himself into his studies.

“(My professors) were really unsure about my course load at first, but they let me make that decision, and were flexible with me in a way that helped me succeed.”

“To my delight, he set the pace in every single one of his courses,” Smith said. “I observed his classmates seeking out his help on assignments. I overheard him asking intelligent, informed questions of his professors. He was quick to learn from mistakes and did not shy away from asking for help or clarification when needed.”

“While it’s not uncommon to do well in one of those, it’s rare to do well in all three,” Smith said. “That is almost unheard of.”

Carter took the Medical College Admission Test in 2020 and scored in the 94th percentile, and when he took the Chemistry Major Field Achievement Test, Carter scored in the 98th percentile – the highest score ever recorded in the history of the UT Martin chemistry department.

“The field test is the exit exam all graduating chemistry majors take,” Shelton explained. “We expected Kyle to do well, but the shock came from him outperforming all previous chemistry students.”

“It feels good to know I’m doing what I need to do to prepare for my success.”

“My first time in college, I never came close to deserving anything like that,” Carter said. “It feels good to know I’m doing what I need to do to prepare for my success.”

He was elected by his peers to become president of the Student Members of the American Chemical Society student organization, a challenging position during the COVID-19 pandemic.

“There were a lot of restrictions on the student organizations, and it was not easy trying to keep the group going,” Carter said. Group meetings moved to a virtual platform, but events were trickier. “We made up boxes, little care packages, and sent them out to members and then opened them all up together over Zoom. That made us feel a little bit like we were together.”

Carter graduated in December 2020 with an American Chemical Society-approved bachelor of science degree in chemistry and a minor in physics.

“The ACS-approved major is more rigorous than the regular chemistry degree; the department and the student have to meet certain requirements,” Smith said.

But Carter wasn’t done yet. Having been accepted into the doctoral program in chemistry at Mississippi State University in the fall of 2021, Carter chose to do an additional semester at UT Martin to complete a biology minor and an additional biochemistry specialization. To bridge the gap financially, Carter was offered a continuation of his prestigious teaching assistant position in UT Martin’s chemistry department, allowing him to stay for a post-baccalaureate semester after officially graduating.

“Teaching (Chemistry 121 lab) has been my absolutely favorite job I’ve ever had,” Carter said. “I really enjoy the opportunity to work with other students and communicate with them, but it also helps me to further hone my skills. I do my best to leave no question unanswered. If I don’t know, I try to find out. Then that is something I learn myself, and that strengthens my chemistry knowledge.”

Smith called Carter “a model of grit,” whose performance at UT Martin has been nothing less than exceptional.

“It can be difficult to come back as a non-traditional student, but it’s not impossible,” said Carter, who will turn 30 in August. “I’ve gotten more out of my experience at UTM than I ever thought I could, and it has been 100 percent worth the work.”

For more information, contact the Office of University Relations at 731-881-7615.