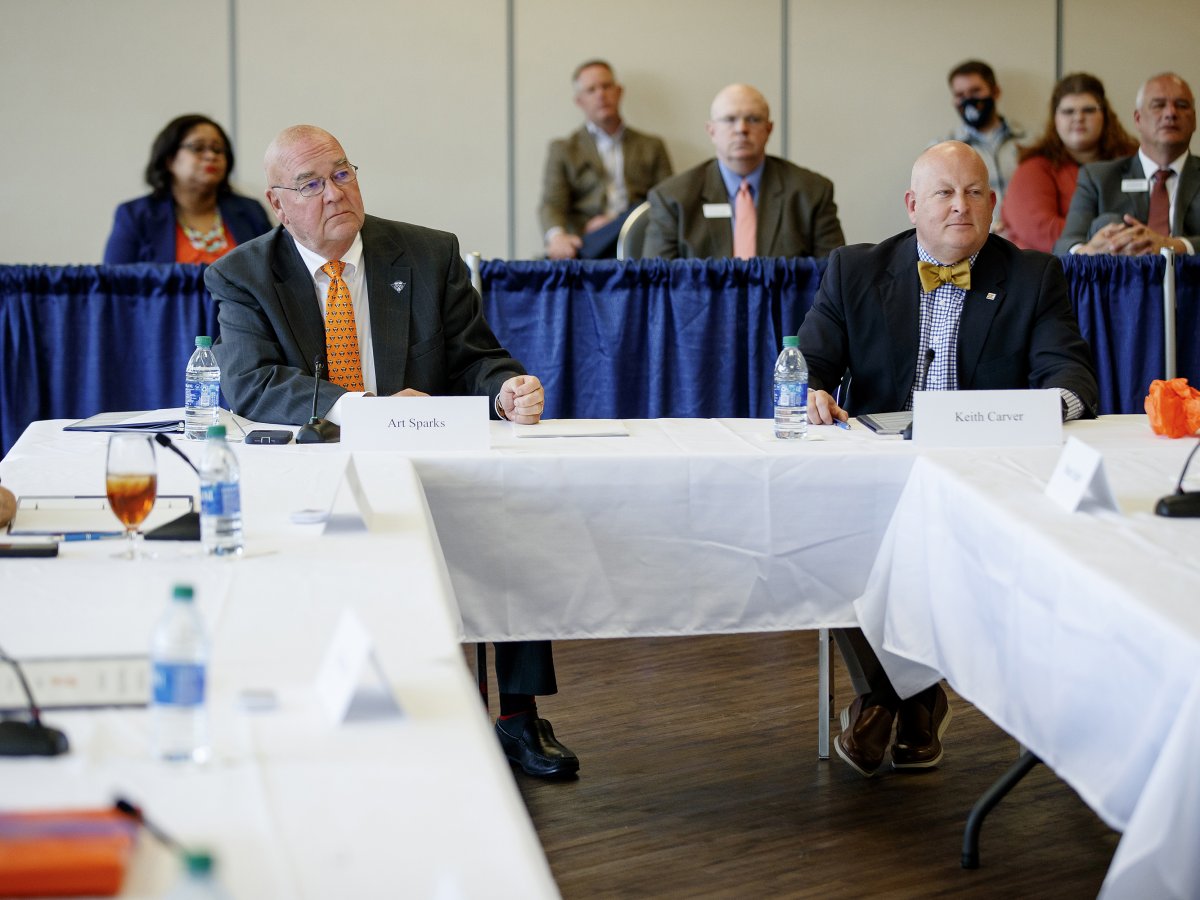 The UT Martin Advisory Board met Friday, May 21, in the Boling University Center for the first in-person meeting of the board since January 2020. The board approved the recommended 2021-2022 operating budget that now moves forward to the UT Board of Trustees for consideration at the June 24-25 meeting in Memphis. Pictured at the meeting are (l to r) Art Sparks, of Union City, advisory board chair, and UT Martin Chancellor Keith Carver.

The University of Tennessee at Martin Advisory Board met Friday, May 21, in the Boling University Center for the first in-person meeting of the board since January 2020. The board approved the recommended 2021-2022 operating budget that now moves forward to the UT Board of Trustees for consideration at the June 24-25 meeting in Memphis. Art Sparks, of Union City, currently chairs the seven-member advisory board that includes Hal Bynum, Sharon; Dr. Philip Smartt, Dresden; Emma Hilliard, student member, Bells; Monice Hagler, Memphis; Julia Wells, Jackson; and Johnny Woolfolk, Madison County.

Dr. Charley Deal, vice chancellor for university advancement, offered the first of two primary board reports by reviewing university fundraising. He noted that fundraising challenges caused by the COVID-19 pandemic didn’t delay new initiatives, including a college-specific fundraising strategy that addresses individual academic college needs and a new UT Martin Telefund program. One success amid the pandemic was the annual Captain’s Challenge that raised just over $431,000 in 24 hours in April, up from $121,000 when the event began in 2014.

Fiscal year-to-date giving as of May 9 stood at $7.3 million raised toward an $8.9 million goal, which appears within reach with other gifts pending. The university will also launch its largest capital campaign in history Sept. 11 at the UT Martin-Samford University football game in Hardy Graham Stadium. Deal said that a key to continued fundraising success is a stewardship plan designed to keep donors involved.

“Our goal in stewardship, when someone makes a gift, that’s not the end,” Deal said. “When they receive their receipt, when they receive their thank you, or they get a video from us saying ‘thank you,’ we want to keep that going. We want … to bring them back into the cultivation stage so that we can solicit them again.” Deal’s vision is to build the current $43 million UT Martin endowment to $100 million by 2030.

Petra McPhearson, vice chancellor for finance and administration, then presented the 2021-2022 operating budget recommendation, which includes a $3 million increase, including $2 million from state appropriations and $1 from tuition and fees. The tuition request is a 2% increase but includes a decrease in tuition for international students who would begin paying out-of-state rates under the revised structure. Student fees will not increase, and the total increase is within the range approved by the Tennessee Higher Education Commission.

McPhearson said that tuition represents about 60% of the university’s revenue, state appropriations account for 35% of revenue, and the remainder comes from grants and contracts, sales and service, and miscellaneous revenue. More than $47 million of the expenditure budget would support instruction. Tuition and fees are compared and monitored annually with tuition and fees at other peer higher education institutions.

McPhearson also provided a COVID-19 relief funding update and reported approximately $5.3 million received from the Coronavirus Air, Relief and Economic Security or CARES Act; $8.9 million received from the CARES Act’s Higher Education Emergency Relief Fund; and $15.5 million from the American Rescue Plan. “Overall, we’re looking at $29.7 million that we will have in funds available to us, with at least $13 million available to directly go to students,” she said.

UT Martin Chancellor Keith Carver expanded on McPherson’s budget presentation and highlighted graduation-rate progress since the Soar in Four tuition model was approved by the UT Board of Trustees and began at UT Martin in fall 2016. The tuition model encourages students to take at least 15 hours per semester in order to graduate in four years.

“Since that program was implemented, UT Martin’s six-year graduation rate has gone up 14.4%,” Carver said, making the current rate 54%. “Now is 54% (six-year graduation rate) good enough? No, it’s not, but if we jumped 14.4 (percent) in the last six years, we’re going to continue on that trend, and we’ll make sure of that.”

In other business, the board formally welcomed Johnny Woolfolk, of Woolfolk Farms in Madison County, as Tennessee Gov. Bill Lee’s most recent appointee to the group. He will serve a four-year term ending June 30, 2024. Also introduced was the board’s next student member, Kelsea Koonce, of Newbern. Koonce is a junior majoring in agricultural business, and her term will run from July 1 to June 30, 2022. She replaces Emma Hilliard, of Bells, whose term ended. Hilliard will attend the UT Health Science Center this fall.

The meeting is archived at www.utm.edu/advisory. The next UT Martin advisory Board meeting will be held Friday, Sept. 17.