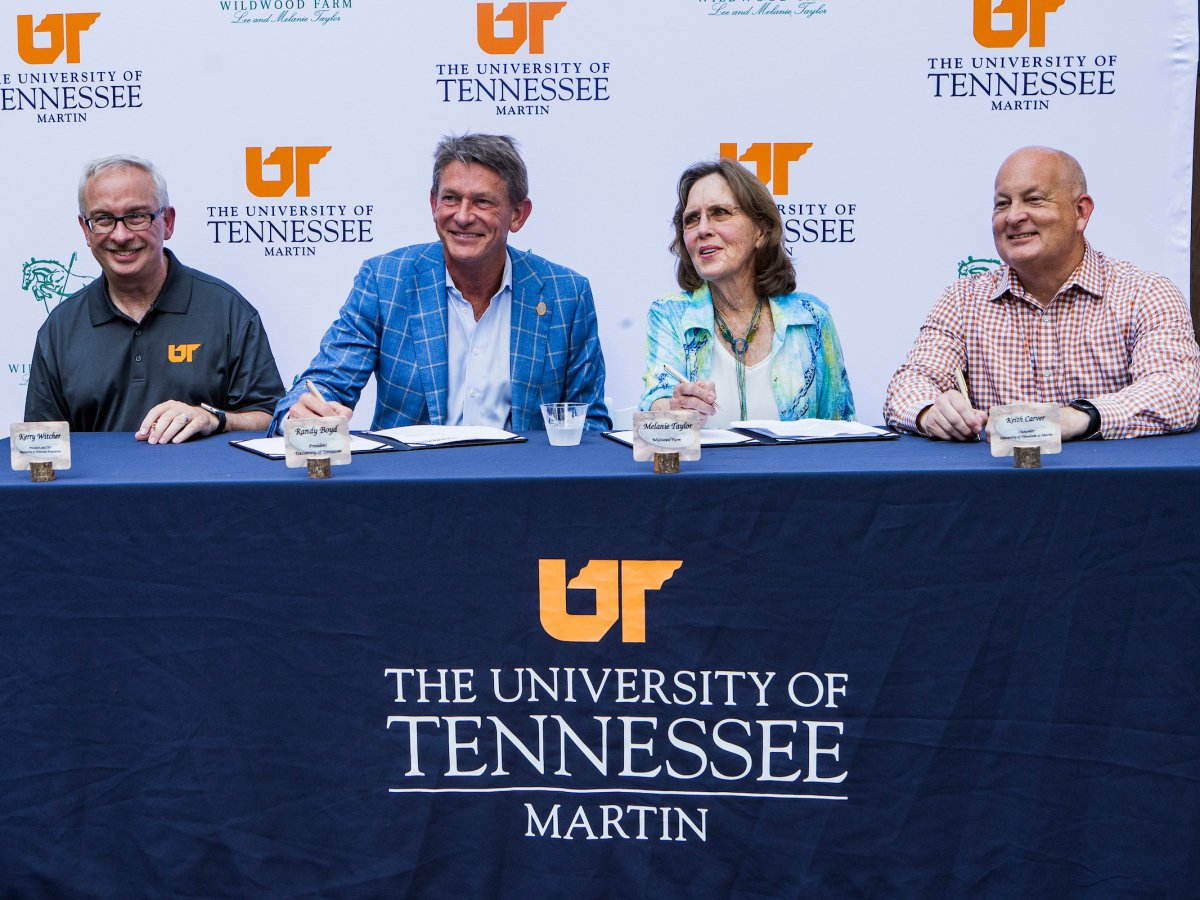 (left to right) Kerry Witcher, UT vice president for development and alumni affairs; Randy Boyd, UT president; Melanie Smith Taylor, Wildwood Farm; and Dr. Keith Carver, UT Martin chancellor, prepare to sign the letter of intent that outlines the agreement for transfer of the Germantown, Tennessee, farm to UT Martin upon Taylor’s death. The gift is the largest single gift in UT Martin history and will allow the university to increase educational program offerings in veterinary health technology and other agricultural disciplines in the near future.

The University of Tennessee at Martin received the largest single gift in its history Thursday, June 24, when Melanie Smith Taylor and her family announced that Wildwood Farm in Germantown, Tennessee, will be transferred to the university upon her death. The gift will allow UT Martin to increase educational program offerings in veterinary health technology and other agricultural disciplines in the near future. The gift will also provide opportunities for UT Martin to collaborate with the University of Tennessee Institute of Agriculture.

The announcement was made during an early-evening ceremony outside one of two large entrances to the Wildwood Farm’s 1930s era Big Barn. UT President Randy Boyd, UT Martin Chancellor Keith Carver and Taylor, a 1984 Olympic Gold Medalist in equestrian, were among those making the official announcement. The gift will make possible educational opportunities in animal science and horsemanship, plant and soil science, environmental management and natural resources management. Early programming will focus on adding a cohort for veterinary health technology.

The farm includes 350 acres of mixed pasture and mature oak woodlots surrounded by dense residential development. The Big Barn was completed in 1935 and became the hub of equestrian history in the Mid-South. Originally built as one of the top American Saddlebred show stables in the country, Wildwood transformed into the setting for many equestrian events.

The farm was originally chosen as the site for the National Steeplechase Tour and the U.S. Open Polo Championship. The property has served as a world-class training ground for polo ponies, hunters, jumpers and pleasure horses. In March 2017, Carnival Memphis presented Melanie Smith Taylor and Wildwood Farm a joint award of excellence “in recognition of outstanding achievement and service to the sports industry and the Mid-South community.”

The relationship between Wildwood Farm and UT Martin began in 2015 and led to the announcement and plans for the property’s future. The plan meets Taylor’s vision to both preserve the farm in the current state and to honor the Taylor family while providing a benefit to students studying all agriculture disciplines. The farm will be used in a similar manner to the UT Martin Teaching Farm located adjacent to the university’s main campus. Wildwood Farm will remain in its current state and provide a much-needed hands-on teaching and demonstration laboratory in agricultural sciences in Shelby County.