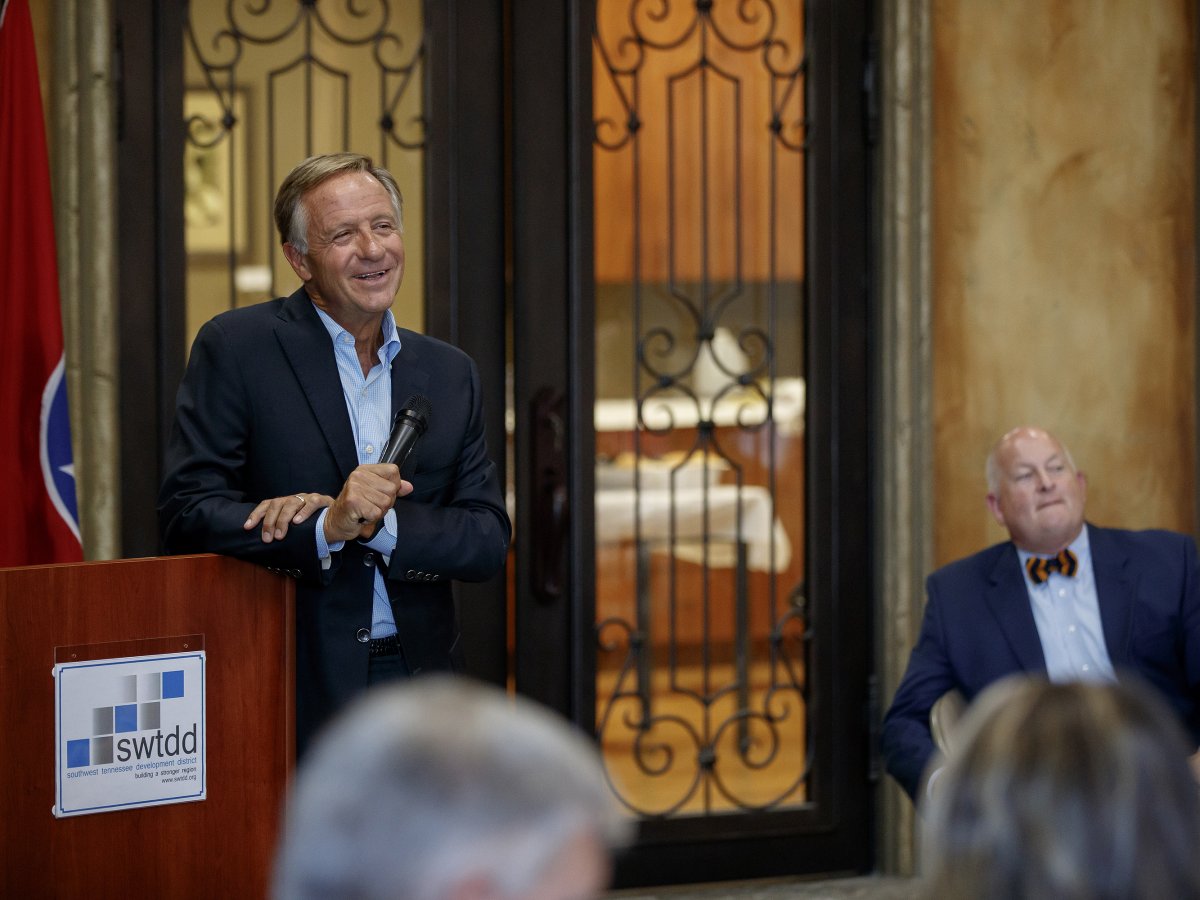 Two-term Tennessee Gov. Bill Haslam sees an almost equal political divide in America, but his hope is that people of faith can help to solve problems and restore unity. His comments came as he talked about his new book “Faithful Presence: The Promise and Peril of Faith in the Public Square” during an Aug. 11 program sponsored by UT Martin’s WestStar Leadership Program. The noon event was held at the Southwest Tennessee Development District in Jackson.

The program was part of the “Lunch Learn Leadership” series sponsored by UT Martin’s WestStar Leadership Program and offered to WestStar alumni throughout the year. The former governor signed copies of his book following lunch and his comments to more than 90 invited guests from around West Tennessee. According to an amazon.com review, the book examines Haslam’s vision “for the redemptive role of faith in politics while examining some of the most complex issues of our time.”

“It’s no secret to anybody, regardless of what your politics are, that the country is really divided, right? If I took a show of hands, everybody would be there,” Haslam said, noting that the last nine presidential elections were decided by single digits, the U.S. Senate is split 50-50, and the U.S. House of Representatives is separated by only four votes, but a deeper issue exists.

“What I’m saying is maybe in this country that’s evenly divided and mad and contemptuous of the other side, maybe people of faith can be part of the answer.”

With these points in mind, Haslam said that he wrote the book for people of faith but hopes others will benefit by reading it and using the ideas to solve problems. “Remember Jesus saying look at the log in your own eye before you get the speck out of someone else’s eye,” he said. “What I’m saying is maybe in this country that’s evenly divided and mad and contemptuous of the other side, maybe people of faith can be part of the answer.”

Haslam highlighted three main points covered in the book, starting with something he learned from his political mentor, the late Tennessee senator and statesman Howard Baker Jr. The one-time majority leader of the Senate and President Ronald Reagan’s chief of staff said, “Always remember, the other fellow might be right.” Applying Baker’s advice, Haslam said “we should approach the public square with humility, meaning ‘I don’t always get this right. I’m here to learn.’”

“The second thing we should do is say, ‘We’re going to approach this not to win the argument but to get the best answer.’” Haslam said that trying not to win the argument is hard for many people, but in the end, elected officials at all levels should seek to arrive at the best answers to problems, which led to his final point about elected officials making a difference.

“… But the thing I always say is it’s much easier to make a point than it is to make a difference.”

“It’s really easy in today’s political world to make a point,” he said, referencing the use of social media. “… But the thing I always say is it’s much easier to make a point than it is to make a difference.” He referenced his own experiences as governor by adding, “And when you’re in office, and I don’t care what office it is, the chances to make a difference are way greater than you think they are. The decisions made can either help more people or not to a greater extent than I ever dreamed possible.”

He closed by saying that people of faith can solve problems right where they are, and Haslam cited the advice given to the captive people of Israel by the biblical prophet Jeremiah who said, “Seek the welfare of the places where you were called, for in its welfare you will find your welfare.” His book’s title “Faithful Presence” was inspired by these words.

“I think that’s what we’re supposed to be doing,” Haslam said. “And whether you’re in a school, in a hospital, in a government job, you’re working on a farm, whatever it is, what we’re supposed to do is to seek the welfare of that place we’re called … and have a faithful presence in those places where God has called us to, whatever that looks like.”