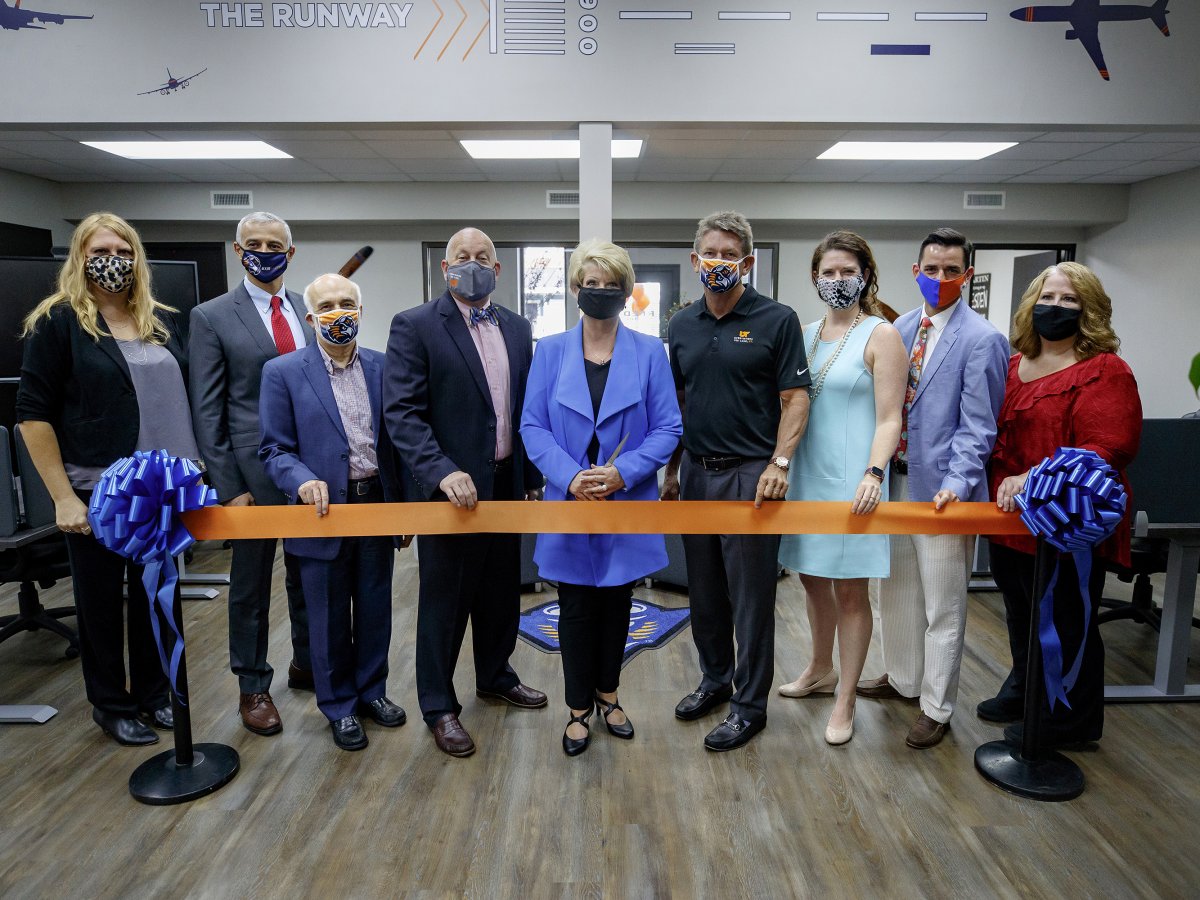 Randy Boyd doesn’t hide his enthusiasm for entrepreneurs. The University of Tennessee System president and businessman was clearly in his element when the Everywhere You Look, UT statewide tour made a stop August 25 at the UT Martin Regional Entrepreneurship and Economic Development Center in downtown Martin. Known as the REED Center, the facility houses the Tennessee Small Development Center and supports existing and potential business owners with individual consultant services, group training services and associated technical resources.

UT Martin Chancellor Keith Carver opened with comments about UT’s economic impact statewide and UT Martin’s economic benefit to the immediate region. He referenced a study released in 2019 by the UT Knoxville Boyd Center for Business and Economic Research that shows the university impact to the state’s economy at approximately $9 billion. “The study also revealed that UT Martin added $198 million income for the region,” Carver said, adding, “And UT Martin creates a positive return on investments made by students, taxpayers and society as a whole.”

Carver then focused his comments on the REED Center, which was established in 2005 in cooperation with the UT Martin College of Business and Global Affairs. “Economic development is exactly what the REED Center is all about,” Carver said. “… We offer courses, workshops and training sessions to meet the needs of small businesses, and it (the center) supports regional economic development.” He also noted that the REED Center became a service center of the Tennessee Small Business Development Center network in July 2009 “as the only center affiliated with a UT institution.”

Carver closed by highlighting the significance of the center’s current location and intentional space for small businesses. “The REED Center moved here in March of 2019 with the intention of expanding and creating some co-working space to provide entrepreneurs, small business owners and remote workers a shared space to connect with others on a professional level,” he said. He credited Landy Fuqua for her leadership of the center.

Fuqua was appointed director in 2012 and shared client-verified information about the center’s impact, which included providing 66 businesses with disaster relief assistance in 2020 during the pandemic. “So out of those 66 businesses that we assisted last year, there were 238 jobs that were retained, and $1.8 million in disaster relief were provided to those businesses,” she said. “We’ve had an additional 58 businesses this year that we have assisted with disaster relief, and they have received $2.2 million in disaster funding, and we have retained 248 jobs that they have reported.”

Fuqua also reported that eight businesses were started through the center last year, and seven more businesses have started to date this year with another potential business funded only recently. “Last year, our businesses reported 128 jobs created, 50 jobs retained and $9.3 (million) of capital infusion to the economy,” she added. “So, we’re very, very proud of that for our businesses.”

In an example of business supporting business and the university, Fuqua credited Dr. Nassar Nassar and his wife, Tracy, for making building space available for the center when it moved a short distance north from the location now occupied by the new Martin Public Library. Discussion of new co-working space also began at that time, and the center’s new location took shape. “He worked with us financially,” she said. “He worked with us on making this space exactly right … and I want to thank you, Dr. Nassar, for your team, for Tracy.”

Boyd also expressed his gratitude to Nassar for the REED Center space. “He’s involved in everything, but he is an entrepreneur,” Boyd said of the Martin business leader. “It takes that entrepreneurship not just for business but for social good as well, and so the more entrepreneurs we can create, the better.” He also focused on other aspects of the university’s service to the state that are being highlighted during the tour, including UT Extension offices in all 95 Tennessee counties; the UT Health Science Center’s free dental clinic in Union City and similar clinics planned in other locations around the state; and UT Martin’s five regional centers in Jackson, Parsons, Ripley, Selmer and Somerville.

The program concluded with the ribbon-cutting ceremony for The Runway co-working space, which will serve as an office space for entrepreneurs, small business owners and remote workers to connect and collaborate on business-related projects. For more information or to become a member of The Runway, visit www.utm.edu/reed, or contact Landy Fuqua at REED@utm.edu.

Other August 25 tour stops included the University of Tennessee Health Science Center Dentistry Clinic in Union City and the UT AgResearch and Education Center in Milan. The Everywhere You Look, UT Tour is scheduled to conclude in November with stops in Roane and Pickett counties in East Tennessee. For more information about the tour, visit https://everywhere.tennessee.edu/tour.