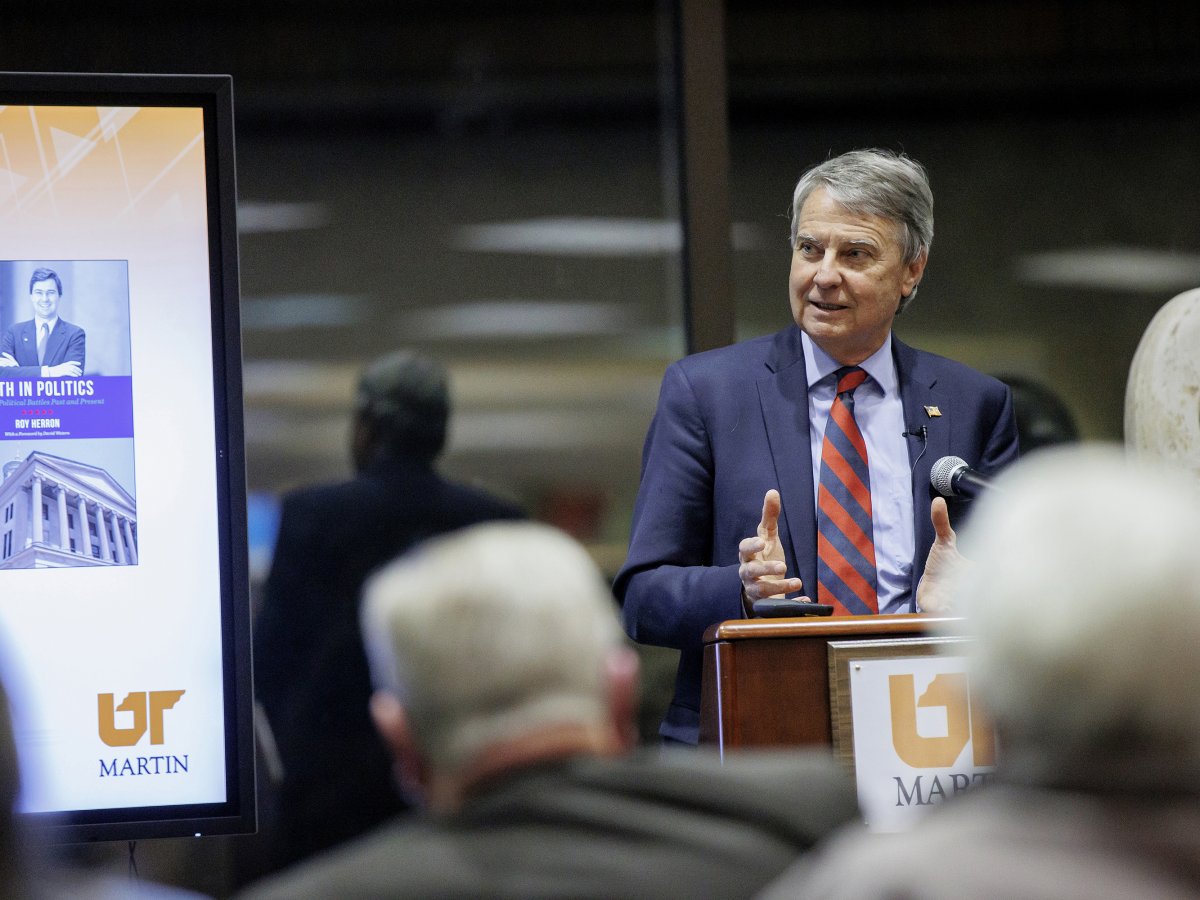 Roy Herron has faith in the American people and the good that our American system of government can do for people. The former Tennessee state senator and Dresden, Tennessee, native makes the case for connecting faith and politics in his latest book, “Faith in Politics: Southern Political Battles Past and Present.” He discussed the book and shared reasons for his optimism about the future during a presentation Tuesday, Nov. 2, in UT Martin’s Paul Meek Library. The book is published by the University of Tennessee Press and provides a selection of his writings over four decades as a legislator, attorney, teacher, and Methodist minister.

The UT Martin and Vanderbilt University graduate is a well-known leader and political figure who served as Tennessee state representative from 1987 to 1997 and state senator from 1997 to 2013, representing Weakley County and 10 other counties in West and Middle Tennessee. During this work, he published op-ed essays and articles in Tennessee’s leading newspapers and publications from “The Japan Times” to “The Wall Street Journal” on various topics including constitutional liberties, economic justice, health care, politics and more. This new volume collects almost 50 of those pieces and investigates how faith and politics are not mutually exclusive, as well as Herron’s belief that faith and spirituality should guide decision making and advocacy in public life.

“I think these essays are at least my best attempt to argue that there’s a place for our faith in politics and that when our politics is shaped by our faith, by the best and deepest of our values, that our politics could be lifegiving and life enhancing and can help us be who we are called to be,” Herron said to the audience. He offered several examples both personally and from the book where elected officials from the major political parties cooperated so that government worked for the benefit of the people they served.

Herron’s most personal story recalled the complicated pregnancy of his wife, Nancy, that threatened the lives of the couple’s twin sons. Thanks to a talented physician educated in public universities, surfactant developed through publicly funded research, and the Vanderbilt University Medical Center’s Newborn Intensive Care Unit that also benefited from government research, both babies were safely born. “By God’s grace and what we, the American people, did through our governments, those babies survived,” Herron said.

“At a time like this, ladies and gentlemen, part of what I want to do in the book and in this conversation is to lift up other people who did it differently.”

While noting the good that government can accomplish, the author and attorney described what he called “endless partisanship” that threatens the cooperation needed to move the country forward. “At a time like this, ladies and gentlemen, part of what I want to do in the book and in this conversation is to lift up other people who did it differently.” His examples of bipartisan accomplishments included famous Tennessee leaders Howard Baker, Ned Ray McWherter, Jimmy Quillen and Lamar Alexander.

Herron described Baker as one of his heroes and the “father of the modern Republican Party in Tennessee.” Baker worked with President Jimmy Carter, a Democrat, to pass the Panama Canal Treaty and with other Democrats to establish the Clean Air Act. “Give him his credit. He (Baker) could be and was at times partisan when the election time came around,” Herron said. “But when it wasn’t election time, when it was time to govern, Howard Baker treated everybody the way you’d want to be treated in accordance with the Golden Rule – he worked with everybody in both parties.”

Also gifted at working across political party lines was Weakley County’s native Ned Ray McWherter. The former Democratic Tennessee speaker of the house and governor worked with U.S. Rep. Jimmy Quillen, a Republican representing the state’s first congressional district, to establish East Tennessee State University’s Quillen College of Medicine. McWherter was speaker of the house at the time and understood that the Tri-Cities was closer to Canada than the one state medical school in Memphis, and that part of the state desperately needed a medical school. “Ned McWherter and Jimmy Quillen worked together, and lives were saved because of that effort, because of that work,” he said.

Also saving lives was the work of then Republican Gov. Lamar Alexander and Speaker McWherter to create a road program in Tennessee that began under Alexander and was completed when McWherter became governor. In addition to creating economic opportunities, Herron said the road program also saved countless lives. “We may not think of that first, but not only does it make it quicker, more convenient and easier to travel, but those divided highways have saved thousands of lives across this state, and that’s something they (McWherter and Alexander) did in a bipartisan way,” he said.

Herron closed by telling the audience that his “faith in politics” is really about his faith in people and what we can do collectively to address important challenges.  “In a word, if my message tonight is anything, it is that I do have faith in politics because I have faith in ‘we the people,’ and I think the possibilities for us when we do it right, when we do it loving one another, the possibilities are enormous,” he said.

“Faith in Politics” includes historic photos and cartoons drawn by well-known Knoxville editorial cartoonist Charlie Daniel. The book is available through the University of Tennessee Press at www.utpress.org or by calling 1-800-621-2736 with 100% of Herron’s royalties going to support college scholarships for Tennessee students.