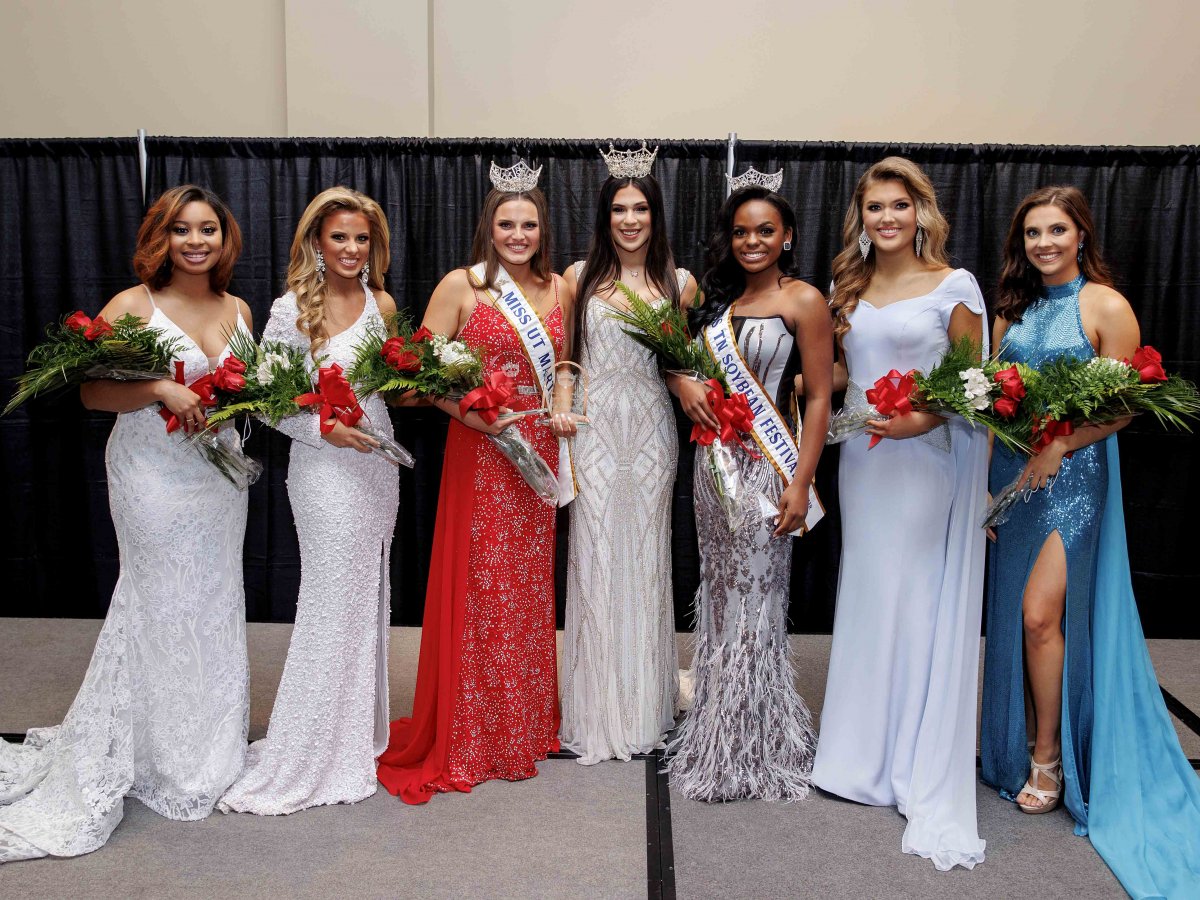 Jackson native Carly White had second thoughts about competing in her first pageant at the Miss University of Tennessee at Martin-Miss Tennessee Soybean Festival Scholarship Pageant. Another contestant, Nadia Treadwell, of Union City, competed in a pageant for the first time since taking a break from pageant competition.

Each decided to compete at the perfect time as they earned Miss UT Martin and Miss Tennessee Soybean Festival crowns respectively during the combined pageant held Nov. 6 in the Boling University Center’s Duncan Ballroom. The Miss UT Martin Scholarship Pageant is in its 58th  year, while the Miss Tennessee Soybean Festival title was awarded for the 22nd time. The combined pageant had not been held since 2019 because of the pandemic.

The new titleholders will compete in the statewide Miss Tennessee Volunteer Scholarship Pageant Wednesday-Saturday, June 15-18, 2022, at the Carl Perkins Center in Jackson. The winner of that crown will serve as the governor’s spokesperson for character education and receive $25,000 in scholarship money.

Pageant competition includes private interview, fitness and wellness, talent and evening wear. Each contestant is scored individually from one to 10 in each category during the daylong competition. White, a 21-year-old Jackson Christian School graduate, messaged with Miss Tennessee Volunteer Amelia Collins on pageant day, still not entirely sure she would compete. Whatever was said in that virtual conversation helped White make a fateful decision to follow through and take the pageant stage. “I thought, ‘You have to start somewhere, so today was the day,’” she said.

Not only did White win the pageant title, but she received both the People’s Choice Award and Miss Congeniality, the latter title voted on by the other contestants. “Well, this was my first pageant ever in my entire life. … I’m honored to be Miss UTM so that I can give back. … I’m so shocked but so excited for this next year,” White said, whose “Don’t Just Survive, Thrive” platform focuses on mental health. “I hold it (promoting mental health) very close to my heart, so I plan to spread positivity around campus and just check on any and everybody because that is now my role as Miss UTM.”

Nadia Treadwell, a 21-year-old Middle Tennessee State University student and Union City High School graduate, began competing in pageants in 2018. Following a break from the pageant circuit, she chose to resume competition Nov. 6. That decision resulted in her winning the Miss Tennessee Soybean Festival crown, which left the talented painter “shocked, happy and excited to start the year.” She, too, will use her title to further her “Celebrating Differences” platform that’s “all about empowering our youth and just giving them that confidence for them to meet their goals.” Her volunteer efforts with young people include working with the Boys & Girls Clubs of Northwest Tennessee and Rutherford County.

Although clearly confident on the pageant stage, Treadwell said one aspect of the competition challenges her most: “I believe the private interview is the hardest part just because it’s so nerve wracking. …You’re setting your first impression for the judges, so it’s a very crucial part of the competition,” she said. Expect both Treadwell and White to prepare well in all judging categories and be ready for the next level of competition in Jackson.

“Carly and Nadia will now hit the ground running,” said Katrina Cobb, assistant station manager for West TN PBS and pageant executive director. “It’s just four months before workshop – an annual event where all of the girls competing in the 2022 Miss Tennessee Volunteer Scholarship Pageant gather with directors and Miss Tennessee Volunteer executives to go over everything from paperwork to wardrobe requirements to timelines. They will also continue to work their platforms, make appearances and, most importantly, continue their education.”

Cobb was pleased with the pageant and said that contestants were clearly ready to resume competing. “It’s been two years since we held local pageants, and our 13 competitors were so happy to get back on stage,” she said. “These young ladies did an amazing job in all areas of competition and were extremely supportive of each other. They were truly a joy to work with.”