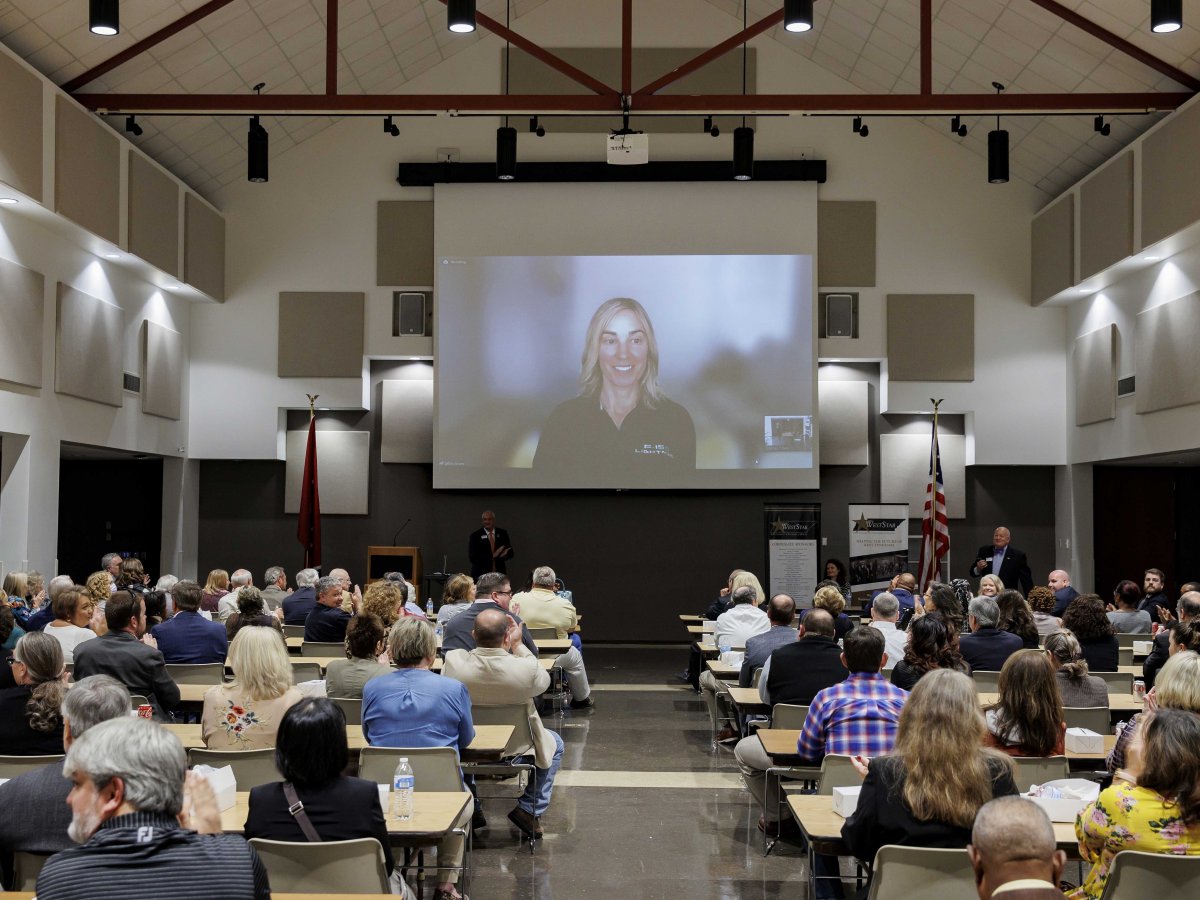 Gabby Bruno (pictured on the screen), Ford regional director of government affairs, and Brooxie Carlton, assistant commissioner, Tennessee Department of Community and Rural Development, answered questions about the project for more than 130 WestStar alumni and invited guests that included many elected officials.

Ford Motor Company’s first new manufacturing plant since the 1960s will change West Tennessee. But until the first all-electric F-Series trucks are manufactured in 2025, much work is ahead to prepare for Blue Oval City, the $5.6 billion Memphis Regional Megasite development announced in September by Tennessee Gov. Bill Lee. Ford and SK Innovation will build a 3,600-acre campus for the project that will create thousands of new jobs in West Tennessee.

Carlton noted early in her comments that Blue Oval City’s size and the spinoff companies that will support the project will require a prepared workforce. “It comes up in every single conversation that I have and making sure that you’re preparing your workforce,” she said. From high schools to colleges and universities, the job of educating a qualified workforce is critical to the project’s success. “Traditionally, for every one direct automotive assembly job, there are another seven plus indirect jobs that are created from suppliers into the local businesses like restaurants and retail stores that employees frequent,” Bruno said. “Definitely being prepared for the change that we know is coming will be key.”

In addition to workforce preparedness, Deal asked if a smart-growth model could be used to manage the growth that communities will experience. “One of the things that I think that we need to do together is kind of get together a meeting and pull in folks from Tupelo, pull in folks from Huntsville, Spring Hill, Chattanooga, some places that have had announcements similar to these, to hear what they would do differently, to hear what they wish they had known when they had thousands of jobs announced in their community, how they wish they had planned for that,” Carlton said. Knowing that communities can’t address planning for growth alone, she said that $5 million is available for community strategic planning in the Blue Oval City incentive package bill recently passed by the Tennessee legislature.

Carver asked Bruno about Ford’s plans for community involvement in West Tennessee. While a new Ford assembly plant hasn’t been built in decades, she assured the audience that the company will be engaged. A website is being developed for the company to communicate project information, and the Ford Fund is the company’s philanthropic arm that provides access to opportunities and resources.

“One thing I can say is we take our responsibility to be a good neighbor very seriously, and we’ll work hard to enrich and give back to the communities that we’re becoming a part of,” she said.

“One thing I can say is we take our responsibility to be a good neighbor very seriously, and we’ll work hard to enrich and give back to the communities that we’re becoming a part of,” she said. “We aren’t coming into the community pretending that we have all the answers or that we know what’s best for you. We really want to try to integrate in your community so we can learn about your concerns and needs in order to maximize the benefits from the project as well as to minimize any disruptions.

“We plan to get to know the government and community leaders in the region and to participate in local chambers, to get to know our fellow businesses in the area.”

Given Ford’s commitment, Deal asked what West Tennesseans could do in turn to make Blue Oval City successful. “Workforce, workforce, and you guessed it, workforce,” Bruno said, circling back to earlier comments. “We’re obviously going to need a qualified workforce, and we’d love to partner with local high schools, technical schools, higher ed, at UT Martin, to create a pipeline of workers. If young people that grew up in the area want to stay in the area, raise a family, you know now there’s another good-paying job option for them to build a life here after they graduate.”

“I think that WestStar is the best convener in West Tennessee,” Carlton added.

“I think that WestStar is the best convener in West Tennessee,” Carlton added. “Y’all have always been able to stay above the politics to bring everybody together from economic developers to local elected officials to business leaders to the banking community, to the public health people.

“Everybody is a part of WestStar, and WestStar can bring all those folks together. I think using this convening, using these connections that you already have is going to be really important.”

With many aspects of Blue Oval City moving quickly, Carver asked Bruno and Carlton to reveal the one thing about the project that keeps them up at night. Bruno said that Ford officials believe they’ve chosen the right location and partners for the development. “Now we need to execute, and so Ford is moving fast to be a leader in electrification,” she said. “We’re investing more than $30 million by 2025 in electric vehicles, and we expect that more than 40% of our global volumes will be made up of EVs by 2030. And our Tennessee Blue Oval City represents $5.6 billion of that investment and nearly 6,000 jobs.”

“This is unprecedented for all of us,” Carlton said. “I think again, that’s why it will be good to have some counsel from folks that have been through something like this before, to make sure that there’s something that doesn’t crop up that we didn’t even anticipate, that we had absolutely no idea it was going to be a big issue, to make sure that we figure out what we don’t know as soon as we can.”

Learn more about the Ford Motor Company at ford.com and about the UT Martin WestStar Leadership Program at utm.edu or call 731-881-7298.