Jasmine Youngblood won’t have to wait long to start her first job after college. The Union City, Tennessee, native received her mass media and strategic communication degree Saturday during the second of three commencement ceremonies held at 10 a.m. at the University of Tennessee at Martin. Youngblood will have a short time to celebrate as she moves to Paducah, Kentucky, to start a multimedia journalist position for WPSD Local 6.

The separate commencement ceremonies Dec. 10-11 provided social-distancing options for in-person participants and attendees. Those unable to attend or who chose not to participate in person were honored virtually as the ceremonies ended. All ceremonies were livestreamed on the UT Martin Facebook page and YouTube channel. Graduates represented 63 Tennessee counties, 25 states and three countries outside of the U.S. In-person participants for the three ceremonies totaled 332 graduates, and another 301 graduates were recognized virtually.

“I just love storytelling and writing, and I loved being able to tell somebody something that they didn’t know and watch their face light up,” she said.

Youngblood is a Union City High School graduate whose parents, Nelson and Clarissa, are both educators for Union City Schools. She transferred to UT Martin after completing her first year of college at another university and continued to pursue her interest in the communications field. “I just love storytelling and writing, and I loved being able to tell somebody something that they didn’t know and watch their face light up,” she said. “As I got older and I found that I could turn that into a career, it was a no-brainer.”

In addition to her classes, Youngblood gained practical experience as she worked at the student radio station WUTM 90.3 FM “The Hawk” and UTM-TV. She also grew as a leader in Summer Orientation and Registration for the Office of Undergraduate Admissions and the university’s Peer-Enabling Program that helps freshmen adjust to college life. “When students would come to me with issues that they had and things that I’d never experienced, learning how to find a solution that would help them was probably the most important thing that I learned,” she said.

Preparation met opportunity toward the end of her time at the university when she had to pick an organization that she wanted to work for as part of a class project. She chose WPSD, “And then literally later that week after I made the decision and had started doing research, Dr. (Richard) Robinson calls me in his office, and he’s like, ‘Jasmine, I think you should try to work at WPSD. … I think you should try to get in there.’” Robinson, professor and WUTM adviser, knew about two station openings, recommended Youngblood, and the graduating senior was eventually hired as a multimedia journalist, a position that aligns well with her storytelling skills.

“My job would be coming up with stories, finding stories that I want to tell in the community, and then I would make that story a reality from start to finish,” she said. “I would pick who I was going to interview, do the interview, shoot all the footage. I would bring it back to the station and edit it myself to make a package for the newscast.”

“And then I would also write a web version of that same story, so it’s pretty hands on as far as every aspect of writing a successful story.”

Youngblood said that the biggest change for her will be audience size as she transitions from reaching a campus audience to communicating with thousands of households served by the station. However, the new graduate is ready for the challenge and credits some key mentors for achieving her dream.

“Definitely my family, my parents in particular,” she said. “They were very strong advocates for getting me to actually pursue what I wanted to do, because it’s kind of hard to pursue a career where you’re going to be more so a talent or like a personality. It can be a little daunting to jump into an industry like that.”

She’s also grateful to the mass media and strategic communications faculty members, especially Richard Robinson and Rodney Freed. “Those two have been behind me hard, like my entire three years that I’ve been here,” she said. “They just kept me motivated and kept pushing me to be the person that I am today, so I greatly, greatly, greatly appreciate the both of them.”

Youngblood took the next step to the professional world when she joined fellow graduates, faculty members and other attendees as Dr. Keith Carver, UT Martin chancellor, presided over commencement and conferred degrees. He opened the ceremony with a moment of silence for those affected by the deadly storms that occurred Friday evening and overnight across the region. Carver later delivered the commencement address, which he titled “10 Things I Wish I’d Known 20 Years Ago,” his list of life lessons that address both personal and professional success. 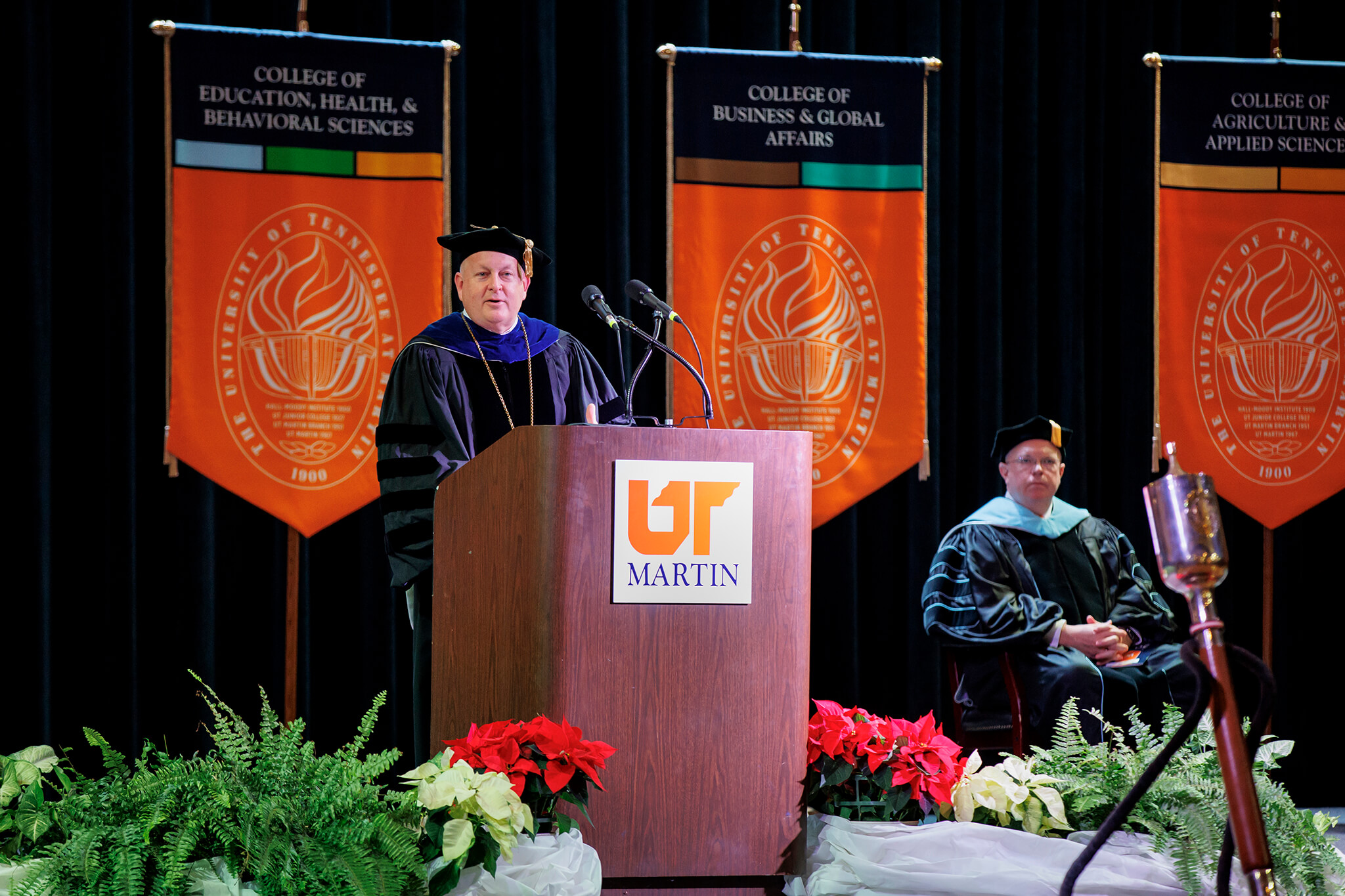 “Every decision you make in life impacts someone else,” he told the audience. “Think about the implications of every choice you make.” He reminded the graduates that a job isn’t just about them but also others in the workplace. “The opportunity to have your job is a true privilege. Treat your coworkers and colleagues with care, as equals,” he said. “Success is earned best by working together as a team.”

Carver advised against idle talk both at work and in the community. “Idle talk is useless in the workplace and in our communities. Be a part of the solution, not a part of the problem.” He urged graduates instead to focus on becoming assets to their bosses and be willing to take on tasks no matter the size. “No task you’ll ever encounter is too small for you. Humility is a wonderful thing.”

Carver urged each to do his or her best when facing a task and to keep priorities in order by taking time to have dinner with family. “You’ll never complete all the to-do items on your list at the office or at the workplace each day, but it is essential that we invest in those that we love and who love us,” he said. “The work will always be there. It’s important to build our relationship with those who bring us joy and renewal, too.”

“Wisdom often comes after careful reflection and life experience, so seek help from those you trust when faced with difficult decisions.”

He closed with a reminder to always do what’s right. “When you don’t know what to do, remember to do no harm until you do. Find good, trusted mentors and seek their counsel,” Carver said. “Wisdom often comes after careful reflection and life experience, so seek help from those you trust when faced with difficult decisions.”