Mary Jo Dougherty remembered for her community involvement and generosity 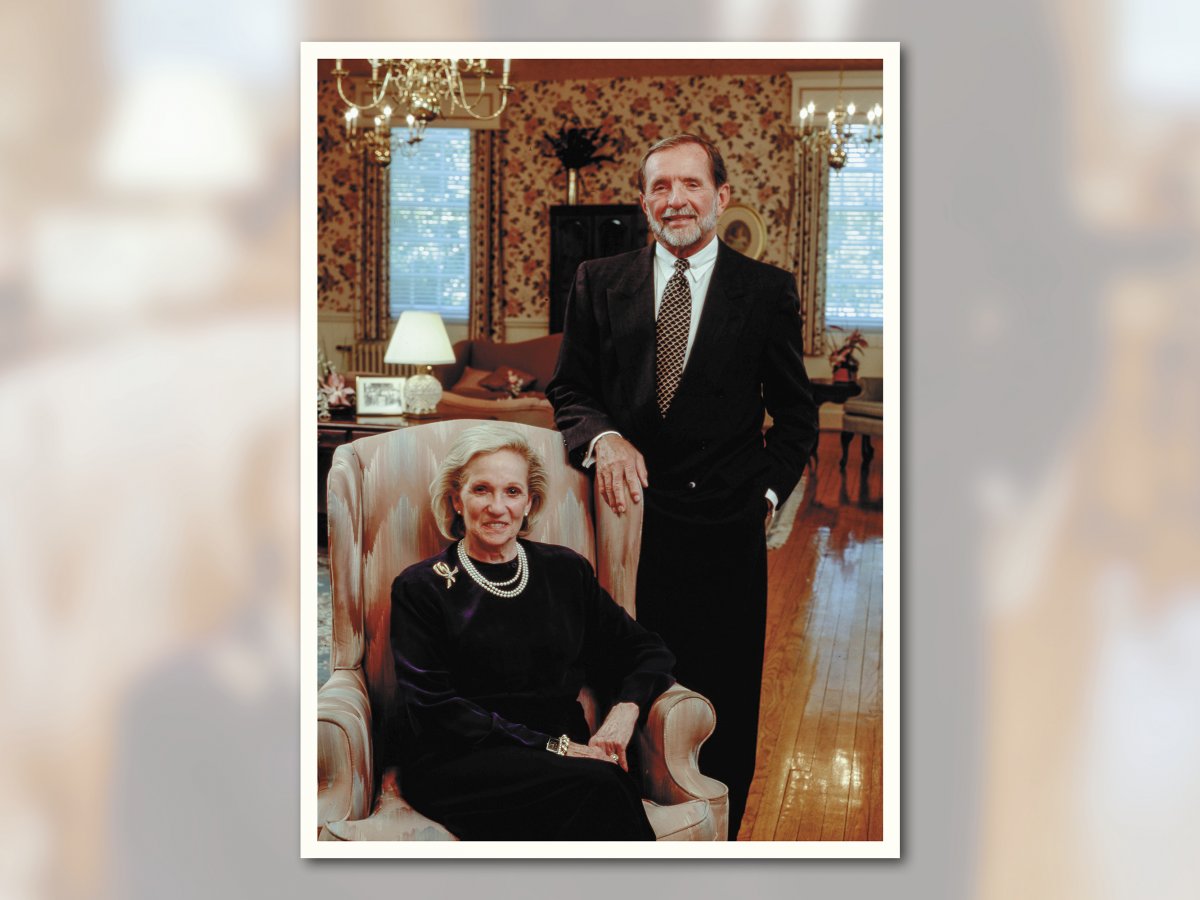 The late Mary Jo and Lew Dougherty are pictured on the fall 1998 cover of Campus Scene, UT Martin’s alumni magazine.

Mary Jo Dougherty, longtime Camden, Tennessee, resident and University of Tennessee supporter, will be remembered for her community involvement and generosity. She died Dec. 21, 2021, at the age of 90. Born Dec. 28, 1930, in Sevierville, Tennessee, she graduated from the High School Department of Virginia Intermont College, Bristol, Virginia, and in 1952 from the University of Tennessee, Knoxville. While at UT, she met her husband, Lew Wallace Dougherty Jr., and they were married March 27, 1954. Lew, a dentist, died in November 2016.

Mary Jo was active in the community and was a member of the Camden Garden Club and the Tennessee Federation of Garden Clubs, serving as an officer in both. She was an accredited flower show judge and judged shows for many years throughout the southeast. She was also interested in the arts and was a founding member of the Benton County Arts Council, a member of the UT Martin Arts Council board, the Northwest Tennessee Humanities Council, and was a supporter of the Cheekwood Botanical Garden and Museum of Art in Nashville.

Mary Jo and Lew began their support for the University of Tennessee in 1977. Since then, the Doughertys have donated $2.18 million to the UT System. Their contributions include supporting UT Martin’s University Scholars Program, the Paul Meek Library, athletics and the Department of Music. In addition to their generous donations, the couple spent countless hours building connections with students, faculty and staff across the system. They received the 1987 Chancellor’s Citation for Extraordinary Service to the University from UT Knoxville and the 2004 Chancellor’s Award for University Service from UT Martin for dedication to their alma mater.

“I always loved visiting their home in Camden,” said Dr. Keith Carver, UT Martin chancellor. “One of my favorite things was seeing their photographs from their international trips. They loved traveling the world, and their hope was that their gifts would allow UTM students to see it, too.”

The Doughertys became particularly interested in the University Scholars Program after students gave a presentation at a development committee meeting. The presentation struck a chord with them, and they quickly became involved and formed bonds with the students in the program.

“While they had no children, I would dare say that every year they’ve got 30 new ones that can call them their parents,” said Dr. Charley Deal, vice chancellor for university advancement. Deal originally met the couple while he worked in the Office of Alumni Relations and went on to serve with them on university fundraising campaigns. “They loved hearing from the students and seeing those students go through the program and graduate at the end. They often said that they would receive notes, handwritten notes from the students.”

Mary Jo was closely involved with numerous alumni associations across the UT System, and her passion was encouraging women to begin donating to their alma mater. Among her board appointments included serving as chair of the UT Alumni Association Women’s Council and as a member of the UTAA Board of Governors and its executive committee.

“I think there have been a lot of women who have graduated from UT, and specifically UT Martin, that can look back and say, ‘Mary Jo Dougherty influenced my giving, my support, my thinking that I needed to support (my alma mater),’” Deal said.

To those close to her, Dougherty was known for her kindness and the strong love she shared with her husband. She supported his every endeavor, and the two were married for 62 years until his death.

“Lew and Mary Jo were among the first people I met when coming to work at UT Martin more than 29 years ago,” said Jeanna Curtis-Swafford, associate vice chancellor for university advancement. “They were two of the very finest. Lew always said that the two great loves of his life were the University of Tennessee and Mary Jo – not necessarily in that order.”

“I remember this like it was yesterday, them walking out of the (Boling) University Center after one of our dinners, and they were holding hands, and they’d been married 50-plus years at that point. That was the kind of love that they shared. And when he passed away in 2016, it left a very big void in her heart and her life. You could just tell it (their relationship) was meant to be,” Deal said. “They would give advice, and when I got married, he always would give me advice about how to stay happy. Of course, I needed to listen, because at that point they’d been married 40 years. They’ve been married longer than I would have been alive.”

Another example of Mary Jo’s compassionate spirit came after Lew’s death. Deal and a mutual friend went to inquire about Lew’s convertible, which was incredibly valuable to him.

“I called Mary Jo and the person that was helping her take care of his items at home, actually went up there, drove (Mary Jo) around and came back, and I told her to give me a price. She said, ‘Well, I know I wasn’t going to sell it to just anybody, but Lew really would really be smiling right now if he knew you had his car,’” Deal remembered.

“On the way back from Camden, my wife discovered that there was a CD in the car that was Lew’s, and it had some Frank Sinatra, and he loved his music. I called (Mary Jo) and I said, ‘I’ve got this CD, if you’d like for me to bring it back,’ and she goes, ‘No, you just keep it. You dance with your bride.’”