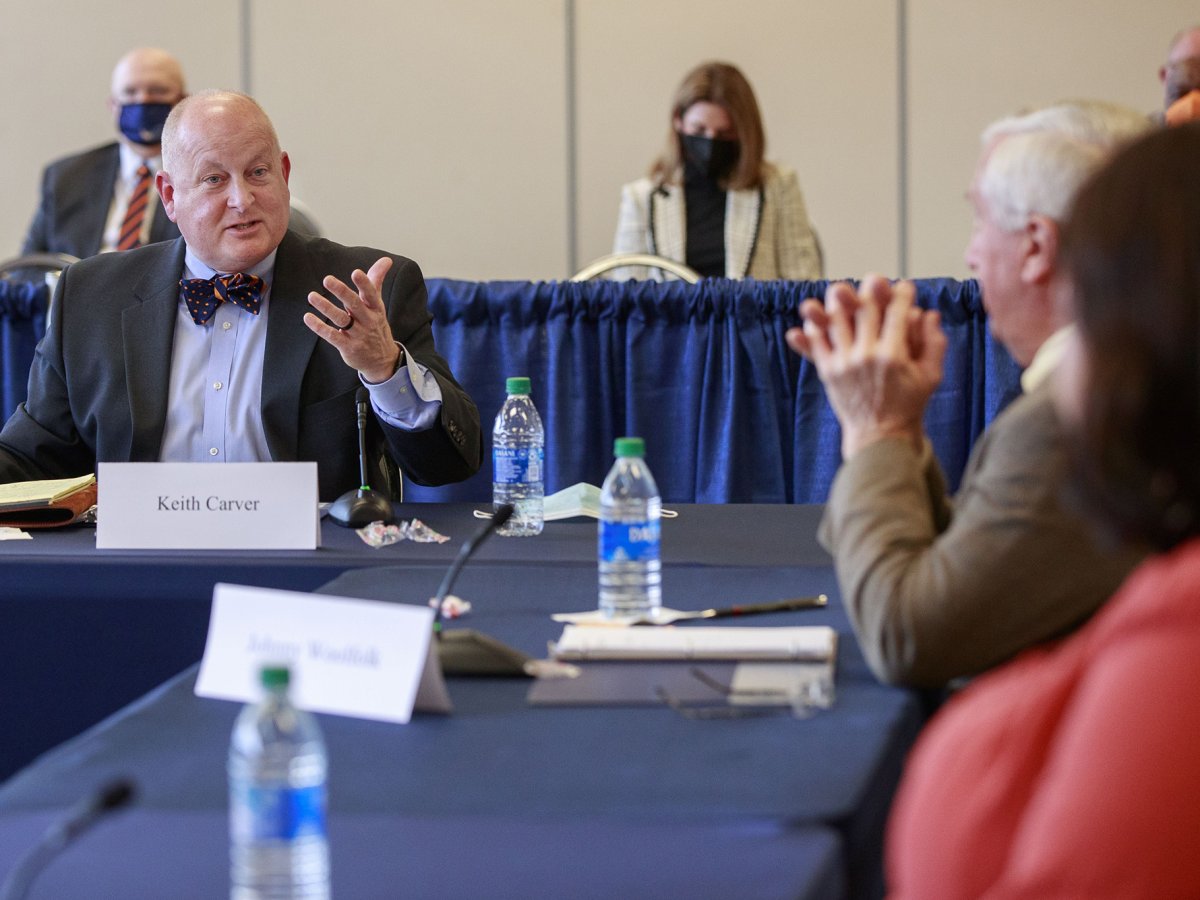 An economic forecast, a preview of the current Tennessee legislative session, a Title IX update and a UT Martin update from Chancellor Keith Carver were presented during the winter meeting of the University of Tennessee at Martin Advisory Board held Friday, Jan. 21, in the Boling University Center.

All agenda presentations were delivered virtually to the board and opened with Dr. Bill Fox providing an overview of the current economic situation in Tennessee. Fox is the Randy and Jenny Boyd Professor in the UT Knoxville Boyd Center for Business and Economic Research. His presentation covered four key disrupters – public revenues, economic transitions, new and emerging technologies, and demographics – that are affecting higher education and how universities must change to meet the needs of current and future students. He also talked about the COVID-19 pandemic’s effect on the economy and the related impact on higher education’s future.

Cary Whitworth, UT vice president of government relations and advocacy, followed Fox with a review of the 2021 legislative session and a preview of the current session. Her presentation highlighted historic investment last year in higher education and the University of Tennessee, full passage of the UT policy agenda and strong state revenues. The current legislative session is underway ahead of Gov. Lee’s “State of the State Address” on Jan. 31 when the governor’s budget proposal is released. Whitworth expects a quick legislative session in this election year that could result in mid-April adjournment.

A UT legislative agenda item potentially impacting UT Martin is the TEST Hub, which was approved in 2021 by the UT Board of Trustees and remains a UT capital project priority. The $17.5 million, 50,000-square-foot Tennessee Entrepreneurial Science and Technology Hub is a joint effort by UT Martin, Tennessee Colleges of Applied Technology and Dyersburg State Community College to support and expand workforce and economic development in rural Northwest Tennessee. Also in line for possible funding is the demolition of the university’s Grove Apartments.

Ashley Blamey, UT System Title IX coordinator, completed the formal agenda presentations with a Title IX update. She reviewed the purpose of Title IX using a graphic that read, “No person in the United States shall, on the basis of sex, be excluded from participation in, be denied the benefits of, or be subjected to discrimination under any education program or activity receiving federal financial assistance.” Blamey recalled the history of Title IX, discussed her related work with the UT Martin case review team, and complimented the university’s progress with its Title IX policy and transparency. A permanent Title IX director will be named to fill the university’s current vacant position in the coming months.

“I really want to pause and thank our faculty and our staff for being back (following the holiday break) working through this face to face,” said Carver.

Carver completed the meeting by thanking the board members for their service to the board and then provided university highlights. He began with a COVID-19 update and reported the high number of current university cases. “The good news is fortunately, our cases, we have not so far had any that we would classify in our student population as severe,” he said, adding, “I really want to pause and thank our faculty and our staff for being back (following the holiday break) working through this face to face.” To keep the university community safe, he said that mask wearing is highly recommended for indoor facilities where social distancing isn’t possible.

Carver discussed university enrollment by first referencing a recent report that said about one million fewer students are attending college nationwide this semester compared to January 2020, a factor that has impacted UT Martin. Approximately 350 fewer students are enrolled at UT Martin from fall to spring, but enrollment indicators for summer and fall are positive. He reported that housing applications are up 54% compared to a year ago and completed FAFSAs among applicants stand at 53% compared to 49% last year. Completion of the FAFSA is required to apply for federal student aid and for students receiving state grants and scholarships.

Another positive indicator for future enrollment is favorable attendance at Future Skyhawk Receptions, which are informational events for prospective students and their families being held in Nashville, Jackson, Memphis, Martin and Dyersburg. “Our deans have been great about coming out talking to students and parents,” he said. “Many (students and families) are coming and just want to find out more about the financial aid (package) or more information on the residence hall rooms,” he said. “Some are undecided.” He told about the recent Jackson reception where one student he talked with decided to attend UT Martin following the event. “I’m not sure if the yield event helped with that one, but it did not hurt.”

“We want to make our campus more user-friendly, functional, inviting to the community but also inviting for students and bringing on new faculty and staff.”

He next talked about the university’s master plan, which outlines the university’s development plans for the next five to 10 years. This involves reviewing existing and future facility needs and enrollment trends that drive those needs. In discussions so far with students, faculty, staff and other groups, he said people are saying, “We want to make our campus more user-friendly, functional, inviting to the community but also inviting for students and bringing on new faculty and staff.” He expects that a master plan report will likely be made this fall to the advisory board.

Carver previewed the university’s long-running Civil Rights Conference in February and highlighted the appearance Feb. 12 by Cyntoia Brown who was granted clemency in 2019 by then Tennessee Gov. Bill Haslam. Brown was a teenage sex-trafficking victim who was serving a long prison sentence for killing a man in a situation that she said was self-defense. She will be joined by well-known Covington trial attorney and UT Martin graduate Houston Gordon for the visit. Gordon was one of the attorneys who represented Brown.

Carver also commended the university’s student athletes who continue to excel academically and in competition. Student athletes have exceeded their cumulative grade-point average for four consecutive semesters and captured 2021 regular-season Ohio Valley Conference championships in women’s basketball, golf, soccer and football. “Right now, we’re number one in the Ohio Valley Conference in terms of the Commissioner’s Cup, in terms of our all-sports performance,” he said.

He closed by reporting the university’s hiring of its first-ever student-retention director who will join UT Martin in February, the university’s educational role supporting Ford’s Blue Oval City all-electric truck manufacturing campus development in West Tennessee, and the success of the current UT Martin RISE Campaign. Caver reported that $158 million has already been raised of the $175 million RISE fundraising goal that was announced last year. “It truly is remarkable the support that we have,” he said, thanking the advisory board for their part in the university’s fundraising success.

The full advisory board meeting is archived at www.utm.edu/advisory. The next UT Martin Advisory Board meeting will be held Friday, May 20, at the main campus.