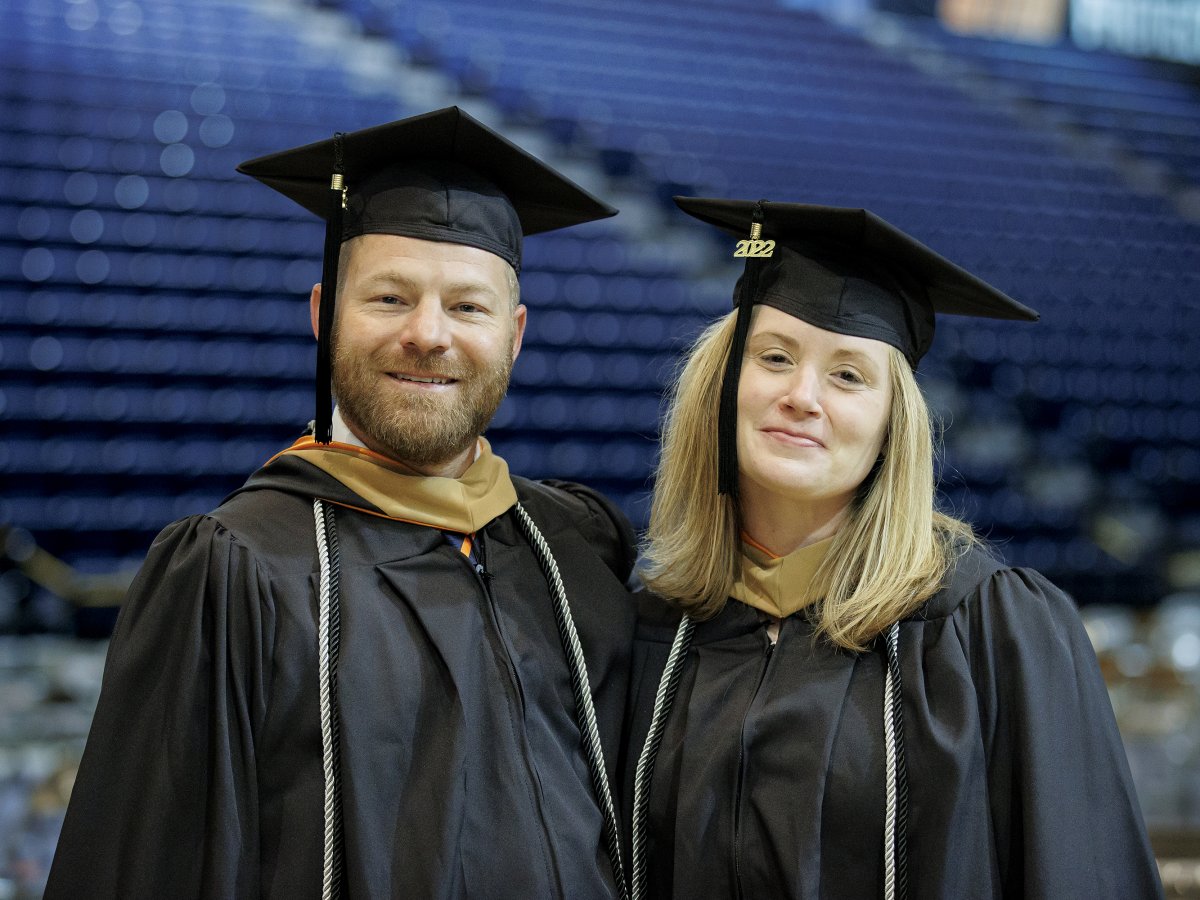 Spring commencement was nothing short of a family affair for Luke and Tiffany Eccles, of College Grove, Tennessee, in Williamson County. Both received Master of Business Administration degrees May 6 during the first of three spring commencement ceremonies at the University of Tennessee at Martin. The Friday ceremony at 6 p.m. in the Kathleen and Tom Elam Center recognized graduates receiving master’s degrees. Undergraduate students received their degrees during the two Saturday ceremonies.

Each ceremony was livestreamed on the UT Martin Facebook page and YouTube channel. Graduates represented 65 Tennessee counties, 31 states and the District of Columbia, and three countries outside of the U.S. Participants for the three ceremonies totaled 598 graduates.

“This way we had like a ‘study partner,’” Tiffany said following the ceremony. “It actually helped us to do it (complete the program) together because then we could talk about it, and we got done at the same time and didn’t have to drag it out.”

The Eccles are new Tennessee residents and considered MBA program options with a preference for earning University of Tennessee degrees. UT Martin’s MBA program offered through UT Martin Online fit the couple’s professional and family needs. They considered whether to pursue degrees together or alternate being in school but ultimately chose to pursue the program together. “This way we had like a ‘study partner,’” Tiffany said following the ceremony. “It actually helped us to do it (complete the program) together because then we could talk about it, and we got done at the same time and didn’t have to drag it out.” The Eccles completed their degrees completely online so had never visited campus until commencement.

Luke holds a bachelor’s degree from MacMurray College and Tiffany a degree from Bradley University, both in Illinois. Luke is a business analyst for Hennessy Industries in LaVergne, and Tiffany is a commercial manager for Mars Fishcare, where she works in procurement and supplier quality. The degrees have already made a difference professionally for both.

Luke said what he learned in the program has given him more confidence with his business knowledge. “I knew I had a lot of it before (business knowledge), but just going through this program … gave me a degree to show that I have a lot of business acumen, so (I’m) looking to use that in the future.” Tiffany’s company supported her graduate-degree work and, knowing that she was about to graduate, she received a promotion last month to a team-leader position.

Besides the professional advancement, celebrating their achievements has another benefit. “We have three boys. We wanted them to see how important higher education was to us so that it helps motivate them in the future,” Luke said. He described the program as family friendly, which allowed the couple to spend time with their sons Nolan, 13, Emmett, 7, and Henry, 3. Still there were challenges, including, “Getting better grades than my wife,” Luke said, prompting Tiffany to add “which he did not succeed at by the way.”

The good-natured competition aside, Tiffany said that time management was the biggest challenge for both while balancing family, full-time careers and homework.  In the end, 18 months of hard work through a pandemic brought a family to Martin for the first time, including children and grandparents, to see Luke and Tiffany Eccles walk across the commencement stage to receive well-earned degrees. Graduation celebrations don’t get much better than that.

Chancellor Keith Carver was speaker for each commencement ceremony, basing his message to graduates on a series of song lyrics from artists ranging from Drake to Post Malone, to the Eagles and Kool and the Gang. The artists’ photos were displayed on the arena’s digital board as he transitioned from one set of song lyrics to another. His commencement address can be viewed at www.facebook.com/utmartin and www.youtube.com/utmartin where the ceremonies are archived. A Spotify playlist featuring the songs is found at  https://spoti.fi/3yrqLW9.

Boyd urged graduates to keep three goals in mind: “Honor the past, relish in the present, and look to the future with great anticipation and hope.”

Boyd urged graduates to keep three goals in mind: “Honor the past, relish in the present, and look to the future with great anticipation and hope.” He noted that University of Tennessee graduates across the state will receive degrees during May. “What you all have in common is you’re leaving the university better than it was when you arrived,” he said.

Church graduated during the third ceremony and shared at each event advice and wisdom that she had gained from her father. She spoke of passion for his vocation, his strong work ethic and his wisdom for recognizing that each day is an opportunity to start anew. “Bad days are inevitable. You’re going to have them, but you’re going to have good days, too,” she said, recalling her father’s positive outlook. “Even on your worse days, it’s important to remember that tomorrow will come, and it will be a new day with new possibilities.”

Joyner closed by asking three things of the new graduates: “Be an advocate for UT Martin. … Stay in touch. … Get involved.” Joyner added, “A university is only as good as its graduates, and from this point forward, your accomplishments, achievements and the way in which you live will reflect upon the educational values of the University of Tennessee at Martin.” Each ceremony ended with the UTM Virtual Choir performing the Alma Mater, which was recorded and edited by 2010 UT Martin graduate Joseph Sam.