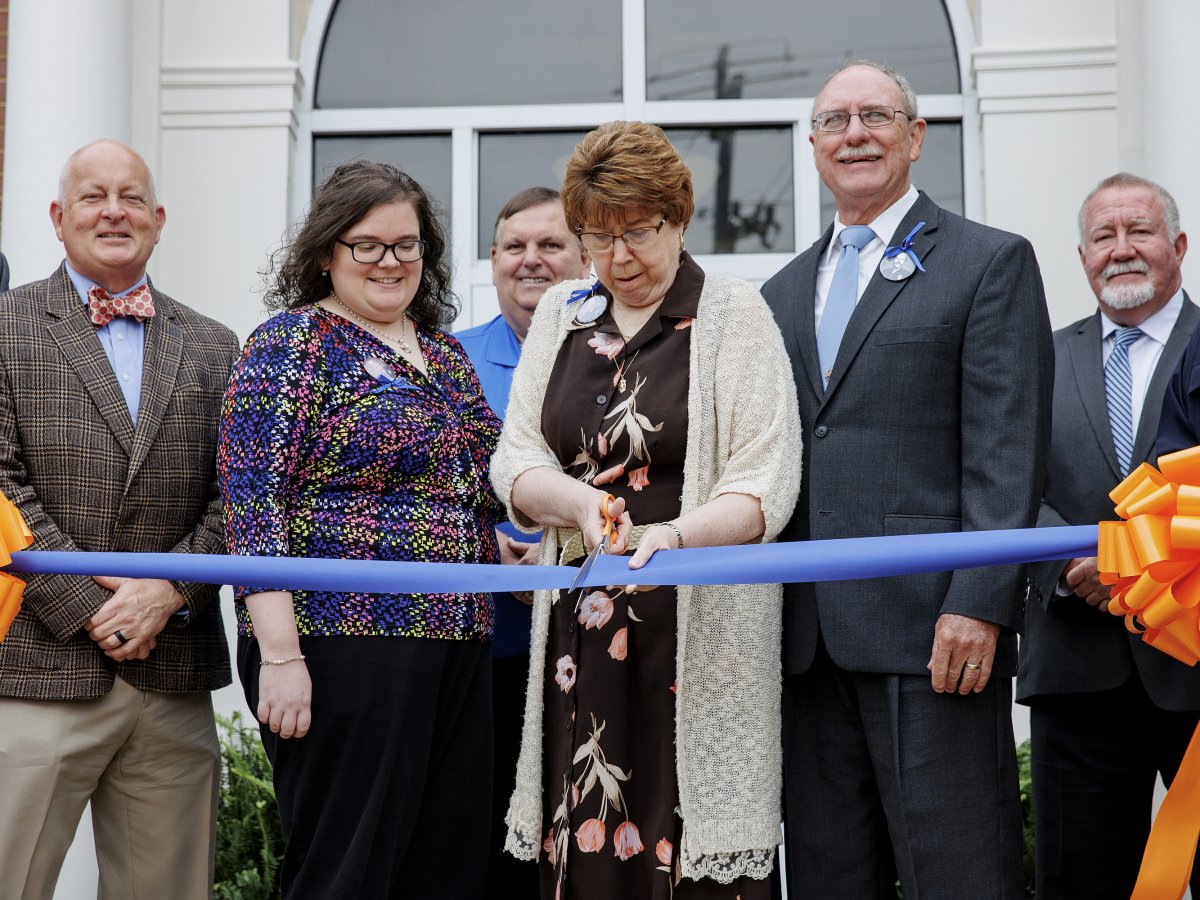 Decades have passed since Officer Lawrence Bromley was killed December 1991 in the line of duty as a member of the Dallas Police Department. However, his years of service and ultimate sacrifice were memorialized May 24 when the Lawrence D. Bromley Training Center, located in the C.E. Weldon Building in downtown Martin, was officially named for the fallen officer. Based on university records, Bromley is the only UT Martin criminal justice graduate to serve in law enforcement and lose his life in the line of duty.

Bromley was a 1981 UT Martin criminal justice graduate from Hohenwald. His wife, Cynthia, of South Fulton, was a 1982 home economics graduate. He was recruited in Martin by the Dallas Police Department in 1981 and went to work there after graduation. His wife was a police dispatcher in Dallas and died of an illness in 1997.

Seventeen retired DPD officers from Bromley’s police academy class and who worked with him in the narcotics unit attended the event. Among the DPD retirees paying tribute to Bromley was Martin native Rick Hatler, a UT Martin graduate and Bromley’s commanding officer in the narcotics unit at the time of Bromley’s death. Additionally, seven current DPD officers attended and included the four-officer DPD Honor Guard. Also attending were Bromley’s sister, Nancy Ray, her husband, Brad, and their daughter, Amy. Nancy and Brad live in Lexington and are both UT Martin graduates.

The event was emceed by Dr. Charley Deal, UT Martin vice chancellor for university advancement, and included the presentation of the colors by the DPD Honor Guard, welcoming comments from university Chancellor Keith Carver and Martin Mayor Randy Brundige, and remarks by Dr. Brian Donavant, UT Martin professor of criminal justice. Don Green, a Tennessee Peace Officers Standards and Training Commission member and 1981 UT Martin graduate who was raised in South Fulton, was the keynote speaker. Green retired in 2008 as deputy chief of the Knoxville Police Department. A ribbon cutting concluded the event.

“He was a great student. He was driven. He had goals that he had set for his life,” Donavant said.

Donavant visited with Dallas attendees at dinner Monday evening, and although he never personally knew Bromley, he learned much about him through stories told by those who did. “He was a great student. He was driven. He had goals that he had set for his life,” Donavant said. “And when the Dallas Police Department was recruiting in Martin all those many years ago, he answered that call.” Bromley proceeded to live a life of service in Dallas that is still remembered. “He made a profound impact on his classmates at the police academy,” Donavant said. “He made a profound impact on the officers, the colleagues that he worked with through his career, and I am so privileged to be able to say that Larry continues to make an impact today all these many years later.”

“There’s no doubt he left a huge impact on the law enforcement profession and members of his community,” Green said in his remarks. “I will tell you that as any individual in law enforcement, the best thing that could be said about us is what legacy we leave for those that come behind us.”

Green’s long and successful law-enforcement career and the opportunity to meet those who knew Bromley caused him to echo Donavant’s sentiments about the fallen officer. “There’s no doubt he left a huge impact on the law enforcement profession and members of his community,” Green said in his remarks. “I will tell you that as any individual in law enforcement, the best thing that could be said about us is what legacy we leave for those that come behind us.” He directed his closing words to those who knew Bromley best: “I am so proud, and I’m honored that you came, and you continue to advocate for your brother.”

Albert Martinez, DPD executive assistant chief, recognized members present from Bromley’s 1981 police academy class, as well as police officers from around the region who attended the event. “We all hurt when we fall,” he said. “We all hurt.” He noted the increasingly complex job that law-enforcement professionals face, which means that more and better-trained officers are needed. “And so here, I hope, that in the Larry Bromley Training Center, we will continue to see those seeds being planted and more serve,” Martinez said. “Those hearts of service will continue to push forward. I also want to say that for Larry, you know, for us officers, we’re all willing to go into the line of fire.”

Nancy Ray was deeply moved by the show of support for her late brother and especially from those who traveled long distances to honor his memory. “Well, it just makes us proud of Larry and everything that he did and makes me proud of my university that they’ve chosen to honor him with this,” she said following the ribbon cutting. “We’re just amazed at the number of people that came from Dallas,” she said. “Most of them, I might have heard their names from Larry, but I didn’t know any of them. So, it’s amazing to see how many lives he touched.” (more)

Space for the Bromley Training Center is provided by the city of Martin and made possible following the construction and opening of the new Martin Public Library. The facility features a VirTra judgmental use-of-force simulator purchased through a USDA Delta Health Care Services grant awarded to the UT Martin Criminal Justice Program for its De-escalation Techniques and Emergency Response Project.

The two-year DETER Project is funded at $547,293 and will deliver de-escalation and emergency health-intervention education and training to reduce the injury and mortality rates of police-citizen encounters. Jackson State Community College and Carey Counseling Center, Inc., are partnering with UT Martin for the project. Donavant and Dr. Cindy Boyles, UT Martin associate professor of criminal justice, wrote the grant and guide the project. One hundred twenty-seven officers and community members have received training at the newly named center since the facility opened in March.

Special police challenge coins were created to commemorate the training center’s naming. The Lawrence D. Bromley Training Center challenge coin is struck in official university colors and displays on the obverse the name of the training center, the date it was established and the UTM Criminal Justice wordmark recognizing Bromley’s status as an alumnus.

The reverse includes Sir Robert Peel’s policing principle “The Police Are The Public and The Public Are The Police” and the UTM criminal justice slogan “Together As One,” which reflects the interconnectedness of police and the citizenry they are sworn to serve. Every officer who completes training at the center will receive a coin commemorating Bromley’s legacy of community service and sacrifice, reinforcing each officer’s obligation to continue that service.