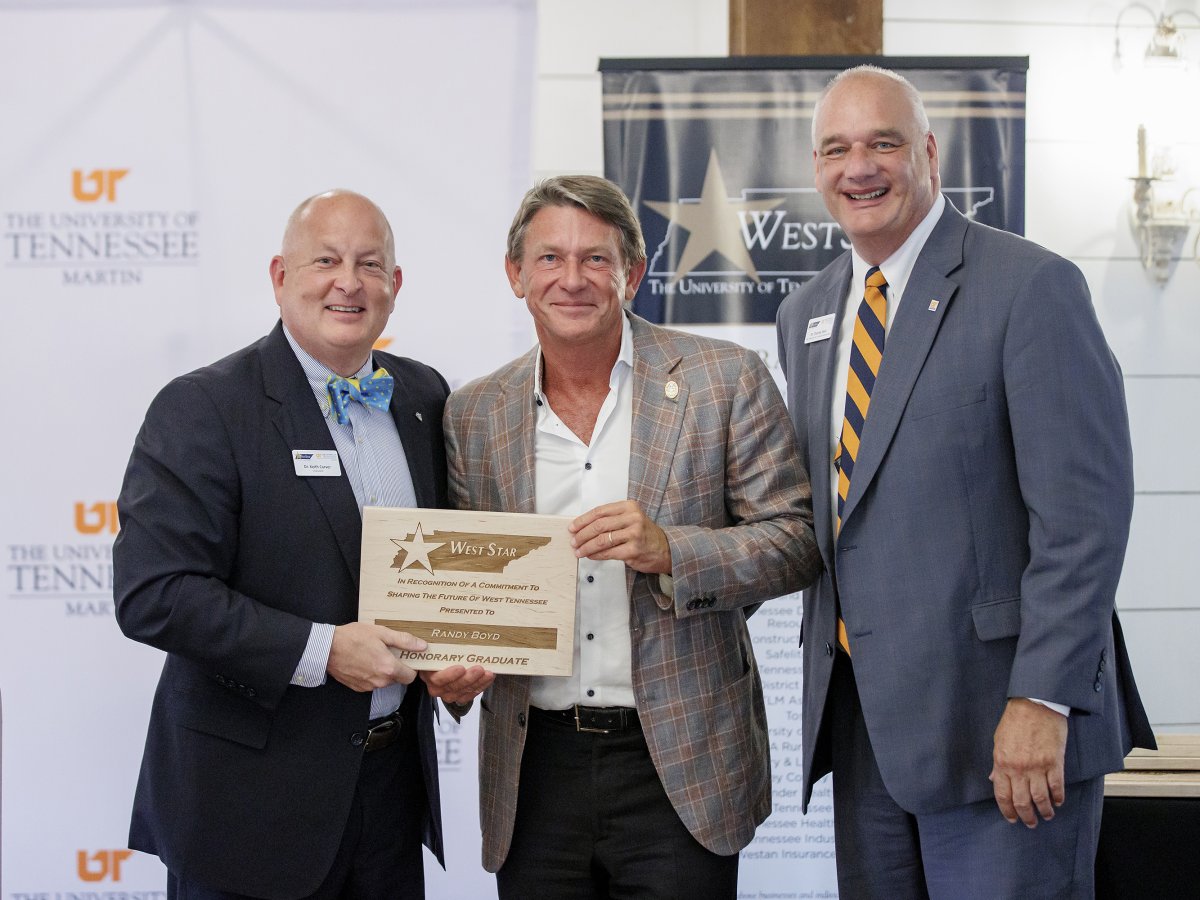 Randy Boyd considers the 2022 University of Tennessee at Martin WestStar Leadership Program participants as his classmates – and for good reason. He’s officially one of them. The University of Tennessee System president was announced as the fourth honorary graduate in the leadership program’s history during WestStar’s annual graduation event held June 21 at The Venue at Twin Oaks in Humboldt.

Boyd also served as the event’s keynote speaker as WestStar recognized 30 graduates from 17 counties in the program’s 32nd class. Others attending the event included Dr. Keith Carver, university chancellor; Dr. Charley Deal, secretary of the board for WestStar and vice chancellor for university advancement; State Sen. John Stevens (R-Huntingdon); and Paige Clark, the newly crowned Miss Tennessee Volunteer. Clark was the guest of Art and Tammy Sparks, of Union City. Art is a 2016 WestStar graduate and is completing his term as a member of the program’s board of trustees.

Each WestStar class is chosen annually by the program’s board of trustees. Selection is based on individual leadership achievements and potential to contribute to West Tennessee’s development. Eight program sessions cover topics in agriculture and transportation; energy, the environment and technology; economic development; public policy issues; education; the humanity of leadership; and tourism. Including the 2022 class, the program has graduated 916 class members since WestStar was established in 1989.

Boyd was appointed the UT System’s 26th president by the UT Board of Trustees on March 27, 2020, following 16 months as interim president following Dr. Joe DiPietro’s retirement. The longtime businessman, entrepreneur and philanthropist is the founder of Radio Systems Corp., a Knoxville-based, pet-related products business. He also chairs Boyd Sports and is owner of the Tennessee Smokies, Johnson City Doughboys, Greeneville Flyboys, Kingsport Axmen and Elizabethton River Riders baseball teams. He also is part owner of the Memphis Redbirds.

Boyd’s extensive public-service resume includes chairing the Tennessee Higher Education Commission and serving as Tennessee Department of Economic and Community Development commissioner. He also served as Gov. Bill Haslam’s special adviser for higher education, led creation of the Tennessee Promise and Drive to 55, and was the founder and chairman of Tennessee Achieves. He spoke to members of the current class and alumni earlier this year during a WestStar Lunch, Learn, Leadership series program in Jackson.

“Anything you can think of that you might have an issue with, give us a call,” he said. “We’re the land grant university. Unlike other universities, our mission is to serve the state of Tennessee. That’s why we were created.” He recalled the history of land grant universities that were established “to provide a ladder up to the working class and the middle class” through access to education. Boyd noted that a well-known college ranking publication includes selectivity among its ranking criteria. “We (UT) don’t want to be known by who we exclude,” he said. “We want to be known by who we include, and we want to make sure that we’re accessible to more students.” He pointed to the UT Promise undergraduate scholarship program as one example of how qualifying Tennessee residents have increased access to attend a UT campus.

Boyd closed his remarks for the audience of current and rising leaders by recalling a 2015 meeting that he attended in Israel when he was serving as Tennessee commissioner of economic and community development. He traveled to Israel with Gov. Haslam and other Tennessee business leaders, and the weeklong trip ended with Haslam and Boyd having a private meeting with former prime minister and Israeli president Shimon Peres. The legendary world leader and Nobel Peace Prize recipient was 92 years old at the time, and somewhat to their surprise, the Tennessee visitors encountered an active, fully engaged man. “This is one of the smartest, most thoughtful people I’ve ever met,” Boyd said, and added, “His view of the world was so deep and so broad.”

Following some general conversation, Peres recognized that his visitors didn’t know what to say, and Boyd remembered him saying, “You know, when people meet me, a lot of times, the first thing they’ll ask is, ‘What was your greatest accomplishment?’” Boyd expected to hear about one of Peres’ many achievements, but instead he responded to the question by saying, “When they ask me what my greatest accomplishment is, I always tell them, ‘It’ll be what I do tomorrow.’ And then they’ll ask me, ‘What was your greatest failure?’ And I always tell them, ‘My greatest failure was I failed to dream big enough.’”

Peres shared other advice, but Boyd was so impressed by the experience that he laughed in saying that he failed take notes. However, he does remember how Peres closed: “When he finished, he said, ‘You’re old when you can count more accomplishments of the past than you can dreams of the future, and you’re forever young when you can count more dreams of the future than you can accomplishments of the past. Always dream big.’” Boyd ended by offering Peres’ advice to his new WestStar classmates and the audience: “Always dream big.”